Syria Daily: The Looming Battle in the Eastern Desert 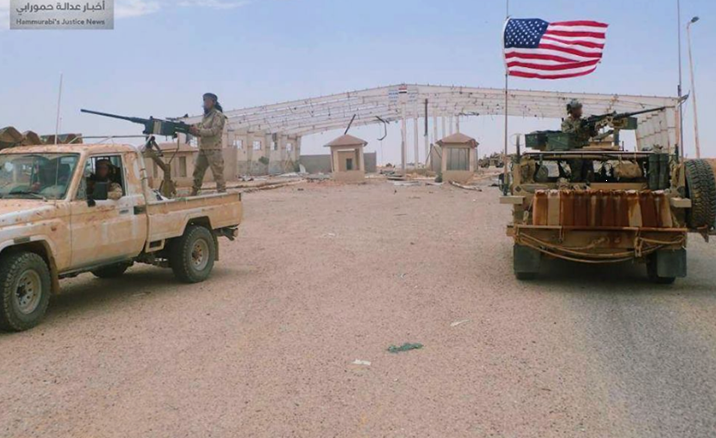 UPDATE 1430 GMT: Russian Foreign Minister Sergei Lavrov has tried to dissuade the US from taking any action in support of rebels against pro-Assad forces in eastern Syria.

Lavrov referred to US airstrikes on a pro-Assad convoy two weeks ago:

There have been not only threats but a fact of using force in this area. I believe this situation is rather alarming as it directly affects Syria’s sovereignty. Certainly, these issues need to be solved, and our troops are doing this now.

He said discussions were being pursued through the US-Russia channel set up to prevent unintentional incidents between warplanes and added, “Of course, the effort would be much more efficient if in addition to the channel, which has a rather limited agenda, the US agreed to join the work on coordinating parameters of de-escalation zones.”

ORIGINAL ENTRY: A battle between pro-Assad forces in the desert in eastern Syria drew closer on Sunday, amid advances on both sides of the Syria-Iraq border.

The pro-Assad forces — including Hezbollah and Iranian-led Iraqi militia — took another 100 square km (39 sq miles) from the Islamic State in the sparsely-populated Badia region over the weekend, following gains of more than 1,000 square km (386 sq miles) during the week. The gains, which began as ISIS withdrew from areas southwest of the city of Palmyra, include the country’s phosphate mines — coveted by Iran for exploitation — and the highway linking Damascus to Palmyra.

Two weeks ago the US carried out its first airstrikes inside Syria against pro-Assad ground forces, striking a convoy with Hezbollah and Iraqi militia advancing towards the FSA and the US special forces in the Tanf base. A tank and engineering trucks, planning to create a forward position, were reportedly destroyed.

However, the rebels expressed frustration with the Americans, who have insisted that the FSA fight the Islamic State and avoid any confrontation with regime forces.

“The coalition is a partner of ours in the war against Daesh, but when it comes to fighting the regime and its foreign militias, [the coalition] is not our partner,” FSA spokesman al-Baraa Fares said on Monday.

A US military spokesman avoided any reference to the situation with the pro-Assad forces in an e-mail answer to Syria Direct, “Coalition forces have operated for many months training and advising vetted partner forces in the fight against ISIS.”

But in a second e-mail statement, the US military did indicate that it would carry out further attacks on the regime military and its allies if they entered a “55 km (34 mile) radius around the area in which coalition and partnered forces are operating near al-Tanf”. Pro-opposition activists on social media showed photographs of leaflets which purportedly reinforced the message.

The FSA indicated that it will not be limited to that zone, as it announced “Operation Badia Volcano”. Spokesman al-Baraa Fares said, “The FSA will fight the regime and its militias…and in the coming days, we will have an even larger role in fighting the regime.” 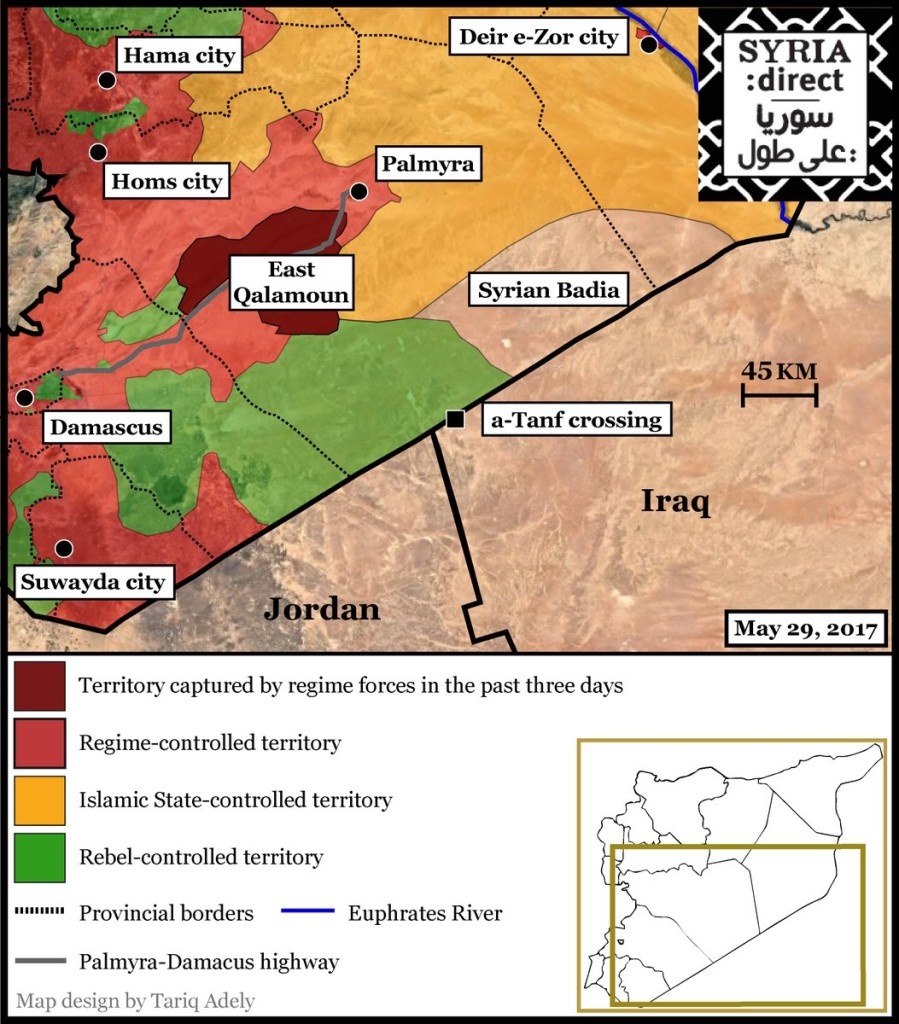 Iranian-Backed Iraqi Militia Advance on Iraq Side of Border

In a further portent of a possible confrontation, Iranian-backed Shia militias have advanced against the Islamic State in recent days on the Iraqi side of the border.

The Popular Mobilization Units said on Sunday that they had taken several more villages from ISIS. A militia commander said the forces were now 20 to 25 km (12.5 to 15.5 miles) from the border, west of the Iraqi town of Tal Afar.

The advance raises the prospect of a ground route for the supply of Iranian weapons to the pro-Assad forces, although this would depend on the regime military and its allies making further progress on the Syrian side — and the claiming of a border crossing such as Tanf.

Iran has propped up the Assad regime and its military since 2011 with the supply of weapons via aircraft.

TOP PHOTO: Free Syrian Army and US forces at the Tanf border crossing on the Syria-Iraq border

France’s Macron to Putin: We Will Respond to Assad’s Use of Chemical Weapons

Standing alongside Russia’s Vladimir Putin, French President Emmanuel Macron has said that France will respond immediately to any use of chemical weapons in Syria.

“A very clear red line exists on our side – that is the use of chemical weapons by whomever,” Macron said at the joint news conference.

Macron balanced between challenge and conciliatoin in his statement. He focused on a fight against “terrorist groups” such as the Islamic State, rather than the Assad regime, as he said he wanted to strengthen cooperation with Russia in seeking a solution by talking to all parties in a “diplomatic and political framework”.

He added that he favored a democratic transition that would “preserve the Syrian state”: “Failed states in the region are a threat to our democracies, and we have seen each time they have enabled terrorist groups to advance.”

However, Macron also chided Putin for the activities of Russian State media outlets such as RT and Sputnik — “They behaved as organs of influence and propaganda, lying propaganda” — bringing to mind his warnings during the French Presidential campaign of a “hybrid strategy combining military intimidation and an information war”.

The Macron camp alleged during the campaign that Russia engaged in disinformation and the hacking and dissemination of its e-mails.

I believe that these allegations are the consequences of the anti-Russian campaign launched by the Obama Administration, which has engulfed a number of western countries. Our western counterparts still can’t overcome this tendency.

He said of Macron’s description of RT and Sputnik as Kremlin-connected outlets for disinformation and propaganda, “The main thing about all these accusations is that we don’t see any evidence.”

Last Set of Forced Removals from Damascus Suburb of Barzeh

The last forced removal of rebels and residents from the Damascus suburb of Barzeh was completed early Tuesday.

About 1500 people arrived in Idlib Province in northwest Syria, while another convoy reached Jarablus on the Turkish-Syrian border.

Barzeh capitulated after years of siege and more than three months of intense bombing and shelling, breaking a “reconciliation” agreement reached in early 2014. Nearby Qaboun also gave way after much of the town was destroyed. 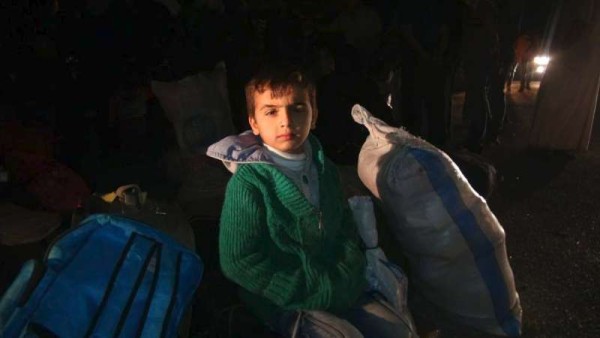