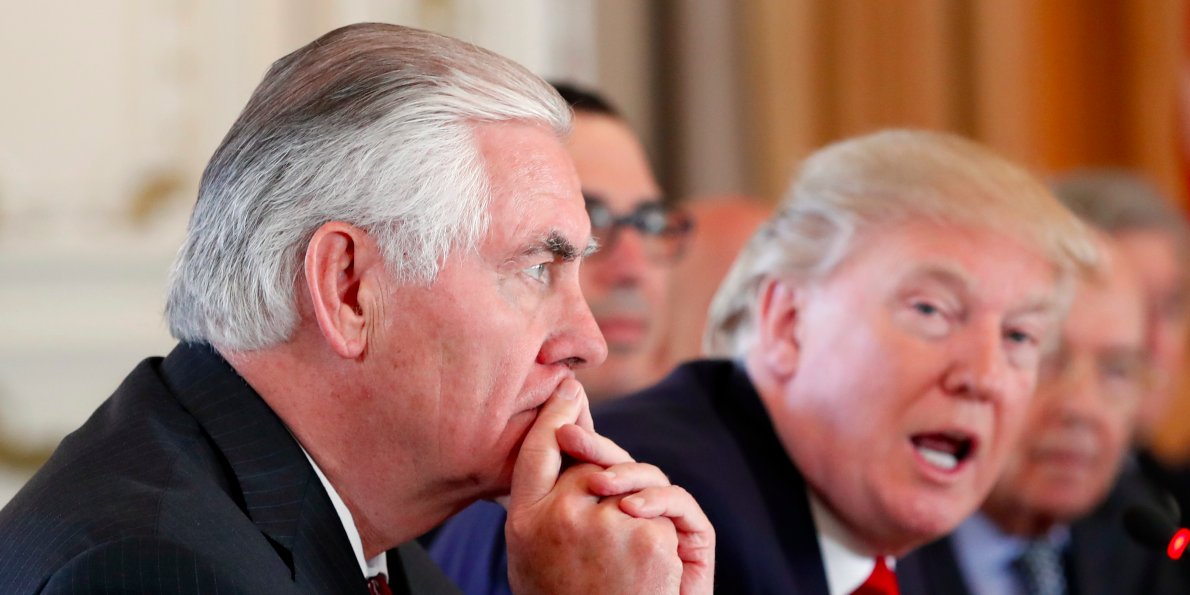 Developments in the Trump Administration on Day 80:

Confusion Over US Position on Assad

The confusion over the Trump Administration’s position on the Syrian conflict only increased on Sunday, with different televised messages from Tillerson and UN Ambassador Nikki Haley.

On Friday, the US carried out its first deliberate airstrikes against the Assad regime in the six-year conflict. Two American warships in the Mediterranean fired 59 Tomahawk missiles on the Shayrat airbase, from which the regime carried out a chemical attack on a town in northwest Syria last Tuesday.

The chemicals, a hybrid of nerve agent and chlorine, killed more than 100 people and wounded almost 600. Donald Trump, noting that “even beautiful babies were cruelly murdered”, said, “It is in this vital national security interest of the United States to prevent and deter the spread and use of deadly chemical weapons.”

However, the US did not draw a line against the ongoing attacks by the Assad regime and its Russian ally with conventional weapons, including incendiary and cluster munitions. Administration officials said the response was only to chemical weapons, with Secretary of State Rex Tillerson saying, “There has been on change in our military posture.”

The situation was further complicated when the US Ambassador to the UN, Nikki Haley, said that President Assad must leave power. This reversed the US position from only last weekend, when the White House said removal of Assad was no longer a priority. Tillerson, using the same words pushed by President Assad, said any decision “must be left up to the Syrian people”.

Haley maintained, in pre-recorded appearances on CNN and NBC on Sunday morning, “In no way do we see peace in that area with Assad as the head of the Syrian government.”

However, in his own pre-recorded interviews, the Secretary of State continued to indicate that Washington’s attention is not on the departure of Assad. He said the US concern is defeating the Islamic State. When that is achieved, Washington could pursue a “political process” to bring about stability in Syria.

Tillerson — who meets Russian officials in Moscow on Tuesday —- gave no indication that this would end with the President’s departure: “It is through that political process that we believe the Syrian people will…be able to decide the fate of Bashar al-Assad.”

A White House official said any difference between Haley and Tillerson was inadvertent and unintentional, and declined to comment further.

But in his first interview as National Security Advisor, General H.R. McMaster added another layer to the debate, appearing to support Haley: “It’s very difficult to understand how a political solution could result form the continuation of the Assad regime.”

However, McMaster indicated that the effort had to be joined by others, significantly implying that this included Moscow:

Now, we are not saying that we are the ones who are going to effect that change. What we are saying is, other countries have to ask themselves some hard questions. Russia should ask themselves…why are we supporting this murderous regime that is committing mass murder of its own population?

The National Security Advisor, in contrast to Tillerson, said US goals of destroying the Islamic State and removing Assad are “simultaneous”.

McFarland Booted from NSC in Another Setback for Bannon

Last week, Bannon was removed from his position on the NSC’s Principals Committee, which implements the Council’s guidelines. The move was seen as an assertion of authority by National Security Advisor H.R. McMaster and his ally, Defense Secretary James Mattis, against the strategist’s attempt to influence the Council with political considerations.

Bannon’s removal is also being seen as part of a widening rift with Donald Trump’s son-in-law and senior advisor, Jared Kushner, who reportedly is concerned that the strategist’s hard-right views are having a detrimental effect on Trump and his policies.

McMaster has tried to dismiss McFarland since he replaced Michael Flynn, another Bannon ally, in February. However, the strategist had been able to block the National Security Advisor’s initial attempts.

Last week stories began to circulate that McFarland, a former Fox News commentator and aide in the Nixon, Ford, and Reagan Administrations, would be nominated as the US ambassador to Singapore. Officials said on Sunday that her move is confirmed.

It is not clear whether Dina Powell, whom McMaster brought in as Deputy National Security Advisor for strategy, would succeed Ms. McFarland as the principal deputy. Ms. Powell, an Assistant Secretary of State in the Bush Administration, is fluent in Arabic and was previously the president of the Goldman Sachs Foundation. She was the only woman in the widely-distributed photograph of Trump and his aides being briefed about last Friday’s US missile strikes inside Syria.