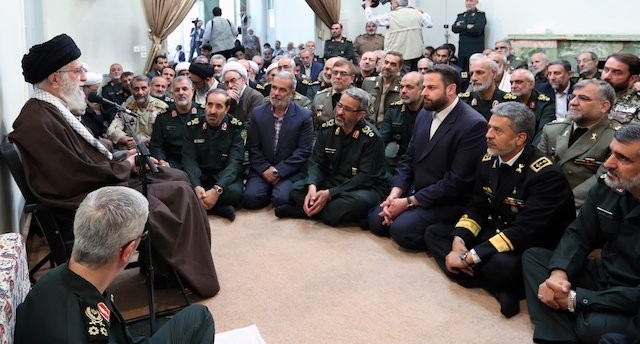 Iran’s Supreme Leader has issued his first statement in months devoted to the Syrian crisis.

Ayatollah Khamenei’s intervention was spurred by the first deliberate US strikes on the Assad regime, firing 59 missiles on an airbase from which last week’s chemical attack killing more than 100 people in Syria was carried out.

Khamenei told military commanders on Sunday, “What the Americans did was a strategic mistake and error and they are repeating the [same] mistakes as their predecessors.”

He insisted that the US attack was part of an alliance with the Islamic State: “Former American officials created Daesh or helped them, and the current officials are also strengthening Daesh or a group similar to it.”

The timing of the Supreme Leader’s statement appeared to be linked to a high-level campaign, coordinated by Iran with Russia and the Assad regime, to show a firm resolve against Washington.

On Sunday, a joint command center pledged: “What America waged in an aggression on Syria is a crossing of red lines. From now on we will respond with force to any aggressor or any breach of red lines from whoever it is and America knows our ability to respond well.”

Iran had been hesitant and cautious in its initial response to the Assad regime’s chemical strike on Khan Sheikhoun in Idlib Province. The Foreign Ministry did not rule out the regime’s responsibility in its statements.

However, Friday’s US attack pushed the Secretary of the National Security Council Ali Shamkhani to say, after his conversation with a Russian colleague, that a “third party” had carried out the attack.

Yesterday Khamenei extended the line to warn, “Europe is currently in trouble for the wrong step that it took for bolstering Takfiris, and [European] people are not secure in [their] homes and on the street, and America is repeating the same wrong step.”