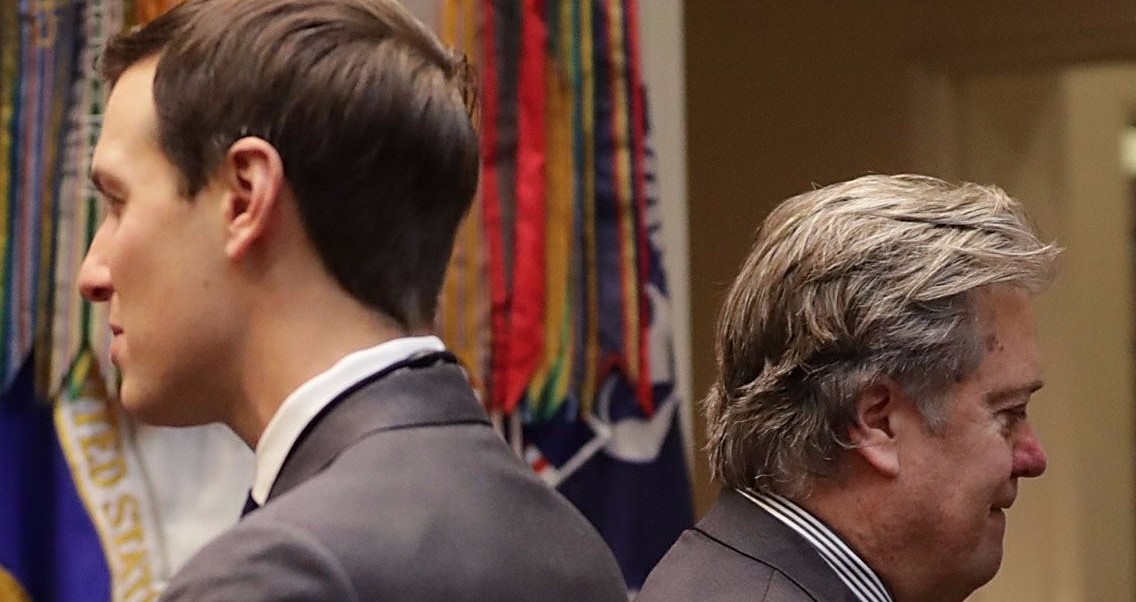 Developments on Day 79 of the Trump Administration:

The split within the White House staff, present since the start of the Trump Administration, widens with a rift between chief strategist Steve Bannon and Donald Trump’s son-in-law and senior Jared Kushner.

The rise in Kushner’s influence, including his role as diplomatic envoy at large, and the demise of the GOP healthcare bill fed tensions; however, the conflict came into the open last week amid Bannon’s removal from the Principals Committee of the National Security Committee. This was followed by the approval of the first US airstrikes on the Assad regime inside Syria, a shift opposed by Bannon.

Kushner is said to be displeased with critical remarks by Bannon and his allies while the President’s son-in-law was in Iraq last week. Bannon has told confidants that he believes Kushner’s contacts with Russian officials, and his expected testimony before the Senate Intelligence Committee, will be a major distraction for Trump.

On Thursday, “two people familiar with the matter” said Trump demanded of Bannon and Chief of Staff Reince Priebus, “Work this out”.

A “White House official” — it is unclear whether from the Bannon, Kushner, or Trump camps — said that Priebus held a meeting with Bannon and Kushner to “get them on the same page” and that “all agreed to move forward”.

But the claims of a battle persist. On Saturday, one source said Bannon’s message was that “Democrats will never run the White House”. The chief strategist often refers to Kushner and Trump’s top economic adviser Gary Cohn as “West Wing Democrats”, according to sources.

Bannon has also labelled Kushner a “cuck” — a slur, short of “cuckservative”, indicating weakness and being conservative in name only, and a “globalist”, according to “several Administration officials”.

One “official close to Bannon” summarized, “He has a very specific vision for what he believes, and what he shares with Trump. And he has for a long time now seen [Jared] as a major obstacle to achieving that.”

Trump spokeswoman Sarah Huckabee Sanders insisted, “Once again this is a completely false story driven by people who want to distract from the success taking place in this administration.”

Meanwhile, the earlier rifts within the Administration reappeared with claims that Trump is considering potential replacements for Priebus.

The Trump White House has been divided from the start between hard-right ideologues led by Bannon and pragmatists including Priebus, Vice President Mike Pence, and the heads of agencies such as Defense Secretary James Mattis and — after he replaced Bannon ally Michael Flynn in February — National Security Advisor H.R. McMaster.

The strengthening position of Mattis and McMaster was seen in their leading role in encouraging Trump to shift from acceptance of Syria’s President Assad to Friday’s US missile strikes responding to an Assad regime chemical attack that killed more than 100 people last week.

See Syria Daily, April 8: Russia Warns of “Extremely Serious” Consequences After US Strikes — But What Will It Do?