Syria Daily: Russia Warns of “Extremely Serious” Consequences After US Strikes — But What Will It Do? 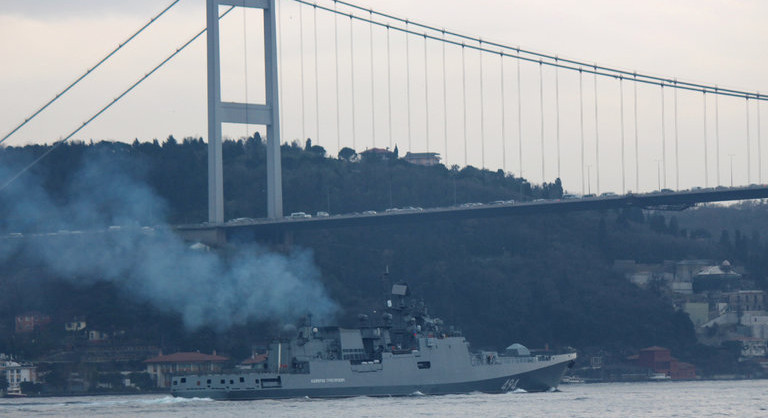 Russia is cautious behind tough rhetoric, limiting action to suspension of “deconfliction” arrangements in Syria

Podcasts: Assessing US Strikes on Assad’s Airbase — & What’s Next

UPDATE 1145 GMT Footage from the Russian pro-Assad site ANNA News showing the regime military assessing some of the damage at the Shayrat airbase:

A commentator on Syrian State TV declares, “America bombed our troops while they were planting almond trees”:

UPDATE 1030 GMT: Pro-opposition activists report that the regime resumed bombing of Latamneh in northern Hama Province early Saturday. They say the attacks included an incendiary material such as napalm.

Latamneh is south of Khan Sheikhoun, the site of Tuesday’s chemical attack, and was itself struck with two “gas attacks” in recent weeks. 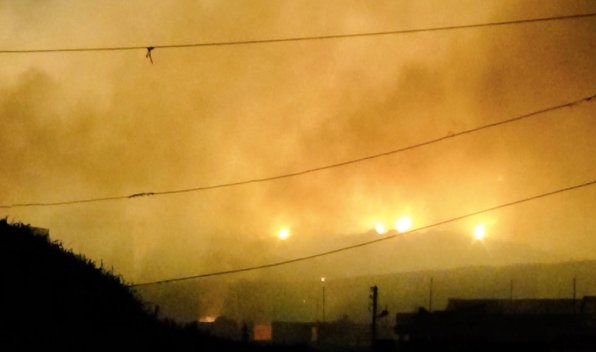 A local still in Khan Sheikhoun: Russian jets bombed us 6 times since the morning. Most town's civilians have fled due to incessant bombings

And in Urum al-Jouz in Idlib Province, eight people have reportedly been killed:

Russia has warned of “extremely serious” consequences after the first deliberate US strikes on Assad regime positions in Syria’s six-year conflict, but has set out only limited steps.

Two US destroyers fired 59 Tomahawk missiles overnight Friday on the Shayrat airbase in Homs Province, from which a regime jet fighter carried out Tuesday’s chemical attack on an opposition-held town in northwest Syria. The extent of damage is disputed, but it appears that up 20 regime warplanes were destroyed, buildings damaged, and runways pockmarked.

Moscow made no statement for several hours before Kremlin Dmitri Peskov put out a condemnation of “an aggression against a sovereign state in violation of the norms of international law, and under a trumped-up pretext at that”. Foreign Minister Sergei Lavrov declared that the “premediated” US strikes were prepared before Tuesday’s chemical attack by the Assad regime.

The Russian military then said it is suspending “deconfliction” arrangements, which seek to prevent mid-air incidents over Syria, with the US, and Moscow declared that it will boost the air defenses of the Assad regime, without specifying how and in which areas.

The Russians have deployed the S-400, S-300, and Pantsir missile systems around their main airbase, Hmeimim, in western Syria.

Later Russian Prime Minister Dmitri Medvedev said the US strikes were one step away from direct clashes with Moscow and that US-Russian rapprochement under the Trump Administration was “completely ruined”. At the UN, Russia’s Deputy UN envoy, Vladimir Safronkov told the Security Council, “We strongly condemn the illegitimate actions by the U.S. The consequences of this for regional and international stability could be extremely serious.

But beyond the suspension of deconfliction, there was no sign of a Russian response. While there were isolated reports of regime warplanes dropping bombs in the northwest — and deadly regime strikes on opposition areas near Damascus — there was no indication of Russian sorties on Friday.

Seeking to limit any confrontation with Moscow, the US military informed Russian counterparts of the Tomahawk strikes 60 to 90 minutes before launch. The notice gave Russian troops, who have been stationed at the Shayrat airbase since early 2016, time to evacuate.

Opposition activists also said the regime was able to move troops and equipment. However, the Syrian military acknowledged seven killed, and the Free Syrian Army and other opposition outlets claimed that the toll was far higher, including the brigadier general commanding the base.

The US Ambassador to the UN, Nikki Haley, said that the US is “prepared to do more” after its “measured step” — “but we hope it will not be necessary”.

Meanwhile the Pentagon appeared to maintain some pressure on the Russians by telling media outlets that it was investigating whether Russian forces were involved in the loading of chemical munitions on the regime warplane on Tuesday.

Two US officials also said they suspect that Russia operated a drone and warplane that surveyed and struck a hospital treating victims of the chemical attack on Khan Sheikhoun in Idlib Province.

The officials said someone turned off the camera aboard the Russian unmanned drone just before the eight strikes on the only clinic in Khan Sheikoun.

Rebels have reportedly advanced in their offensive inside Daraa city in southern Syria, taking more of the Manshiyah district. Unconfirmed claims say rebels have completed the takeover of the area.

Rebels launched their offensive in February and have gradually claimed territory. Earlier this week, they took the military and security headquarters in Manshiyah.

The Free Syrian Army has issued a statement calling on the international community to help “neutralize” the regime town of Mhardeh in northern Hama Province.

The FSA said Mhardeh has been converted to an “Iranian military base” as pro-Assad forces try to hold back a rebel advance.

During their offensive last month, the rebels surrounded Mhardeh but the FSA said it would not be attacked because of religious sensitivities. Pro-opposition activists subsequently accused pro-Assad militia of using the town as a “safe haven” from which to fire rockets on rebels, supporting a pro-Assad assault on the nearby town of Halfaya. 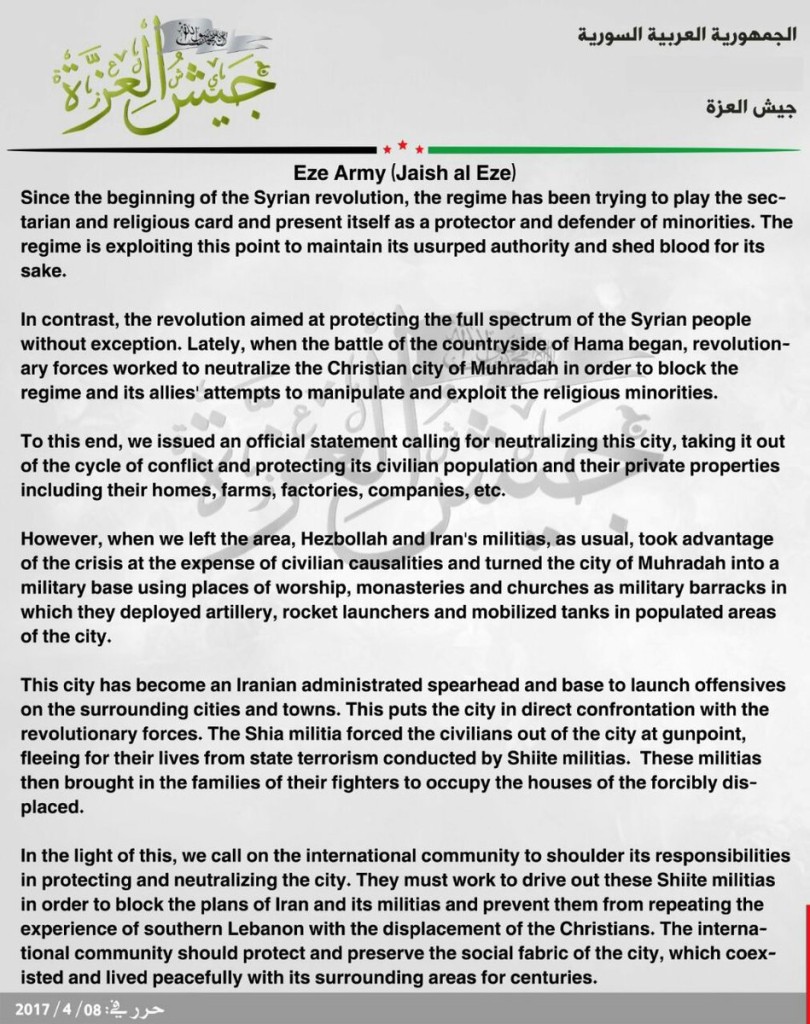 Despite the US strikes on its Shayrat airbase, the Assad regime is continuing its bombing in northwest Syria, with the White Helmets reporting the deaths of two more of its volunteers.

Almost 180 rescuers have now been killed by regime and Russian attacks since 2013.

Two WH heroes have fallen today while responding to airstrikes in Jisr Al Shughur in Idleb. Muhammad and Tha'er, may they Rest In Peace pic.twitter.com/25PyDK3LvF