Syria Daily: Will Russia Separate Itself from Assad? 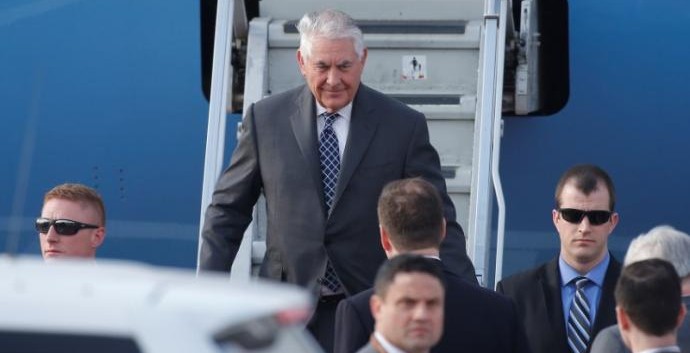 Countries agree firm line for Russia to withdraw support from Bashar al-Assad, but can US Secretary of State Rex Tillerson succeed in the task?

The vote was 10-2, with three abstentions.

The draft by the US, France, and UK mandated the regime to cooperate with inspectors chosen by the UN and the Organization for the Prohibition of Chemical Weapons, give prompt and unrestricted access to “any and all sites”, provide flight plans and logs they request, and give the names of military officers “in command of any aircraft” to be investigated. The regime must also “arrange meetings requested, including with generals or other officers, within no more than five days of the date on which such meeting is requested”.

Before Tillerson’s arrival, the Kremlin said the meeting had been cancelled, but Russian media outlets said it would still take place. No details were given about the 110-minute conversation.

Tillerson said, after a joint news conference with Russian Foreign Minister Sergei Lavrov, that relations are “at a low point, there is a low level of trust between our two countries”. But he said the discussion with Putin was “productive” over improving channels of communications and “possible ways forward” over Syria.

The Secretary of State emphasized common ground such as belief in a “unified and unified Syria” and “denying a safe haven for terrorists”. He said both sides had agreed on consulting allies to find “a way forward” in the conflict.

Lavrov, who had earlier criticized the US missile strikes in response to the Assad regime’s chemical attack last week, said the talks were “substantial”.

However, in contrast to Tillerson’s emphasis on cooperation, Lavrov challenged the Americans in a renewed attempt to distance the Assad regime from the chemical attack on Khan Sheikhoun. Ignoring the collection of evidence so far, he called for an international inquiry:

I would like to stress that we are 100 percent sure that, if our colleagues in the UN or in The Hague will steer away from this investigation, it will basically mean that they do not want to find out the truth.

The Foreign Secretary said any UN Security Council resolution that focused on “solely blaming Damascus” and not on an investigation would be counter-productive. He asserted that Moscow considers the US summary of the chemical attack (see original entry) “unfounded” and “lacking evidence”.

UPDATE 1530 GMT: President Vladimir Putin and Foreign Minister Sergei Lavrov have set out a tough line at the outset of talks with US Secretary of State Rex Tillerson.

Putin defied any attempt to separate Russia from President Assad, reiterating support and denying that the regime carried out last week’s chemical attack on Khan Sheikhoun in northwest Syria.

“One could say that the level of trust on a working level, especially on the military level, has not improved but has rather deteriorated,” Putin said in an interview broadcast on Russian television.

Lavrov tried to put the onus on the Americans rather than Damascus: “I won’t hide the fact that we have a lot of questions, taking into account the extremely ambiguous and sometimes contradictory ideas which have been expressed in Washington across the whole spectrum of bilateral and multilateral affairs.”

The Foreign Minister cited last Friday’s US missile strikes in response to the regime use of chemical weapons: “And of course, that’s not to mention that apart from the statements, we observed very recently the extremely worrying actions, when an illegal attack against Syria was undertaken.”

As a whole, the administration’s stance with regard to Syria remains a mystery. Inconsistency is what comes to mind first of all.

In general, primitiveness and loutishness are very characteristic of the current rhetoric coming out of Washington. We’ll hope that this doesn’t become the substance of American policy.

ORIGINAL ENTRY: US Secretary of State Rex Tillerson will meet high-level officials in Moscow on Wednesday, pressing Russia to separate itself from Syrian leader Bashar al-Assad.

Tillerson is carrying the message of the G7 countries, who agreed on Tuesday that Assad has to leave power for any political resolution of Syria’s six-year crisis. He will meet Russian Foreign Minister Sergei Lavrov. The Kremlin has said there will be no official session with President Vladimir Putin, although some Russian outlets are saying that a meeting will take place.

The G7 divided over action following the Assad regime’s chemical attack on a town in northwest Syria last week. British Foreign Minister Boris Johnson proposed the levying of further sanctions on regime and Russian officials; however, the majority said the step should await the outcome of Tillerson’s trip and an independent investigation to confirm the use of chemicals — believed to be a hybrid of nerve agent and sarin — that killed more than 100 people in Khan Sheikhoun in Idlib Province.

Still, the call for a firm line that Russia should give up on Assad, while retaining a Syrian state posing no threat to Russian interests, is a marked shift. Only a few days before the chemical attack, the White House — including Tillerson — was saying that Assad’s departure is no longer a priority.

But the assault on Khan Sheikhoun opened up space for the Pentagon and National Security Council to call for a clear signal that no more chemical use would be tolerated. Last Friday the US fired 59 Tomahawk missiles on Shayrat airbase, from which the Su-22 jet fighter with the chemicals took off, damaging or destroying hangars, support buildings, and up to 20 warplanes.

But the US appears to have ruled out for now any further action to deter the Assad regime and Russia’s conventional bombing, including of civilian areas in opposition territory and with incendiary and cluster munitions. Despite the loss of the warplanes at Shayrat, the regime and Moscow stepped up the attacks across northwest Syria and near Damascus over the weekend, killed dozens of people and starting large fires with the incendiary bombing.

The White House followed up on Tuesday with a four-page summary on the Khan Sheikhoun attack, outlining its intelligence and rebuffing Russian attempts to divert blame from Assad. The document, presented by Defense Secretary James Mattis and CENTCOM commander Gen. Joseph Votel, cited signals and geospatial intelligence, including radar tracking of the Su-22 jet fighter that dropped the chemical munitions and satllite imagery of the attacked site; physiological samples from multiple victim; and “a body of credible open source reporting”.

The US analysis is that the regime launched the chemical attack in response to an opposition offensive in neighboring northern Hama Province, launched last month, that “threatened key infrastructure”. Without naming President Assad, it says “senior regime leaders were probably involved in planning the attack”.

The summary concluded that “most Russian allegations have lacked specific or credible information” and that they “have been timed to distract the international community from Syria’s ongoing use of chemical weapons”.

In its latest attempt to shift blame from the Assad regime, Putin and other Russian officials tried to establish the mirage of rebel “false flag” chemical attacks on opposition territory.

Moscow had attempted the line that a regime warplane hit a rebel warehouse filled with chemical stocks near Khan Sheikhoun, but had not produced any evidence of such a warehouse or of any chemicals held by rebels. In addition, specialists noted that a nerve agent and chlorine — which require mixing to be effective — would have been destroyed and thus could not have caused the deaths in the town.

So Putin declared on Tuesday that rebels are likely to carry out chemical attacks near Damascus and blame them on the regime — the same line that Moscow used to cover up the Syrian army’s sarin attacks in August 2013 that killed more than 1,400 people near the
capital.

#SYRIA Insurgents are delivering toxic substances to areas of Khan Sheikhoun, Jira airport, East Ghouta and to the west from Aleppo

Kafranbel Protesters Return With Their Posters

After a lengthy break, the protesters of Kafranbel in Idlib Province in northwest Syria have returned with their iconic posters. 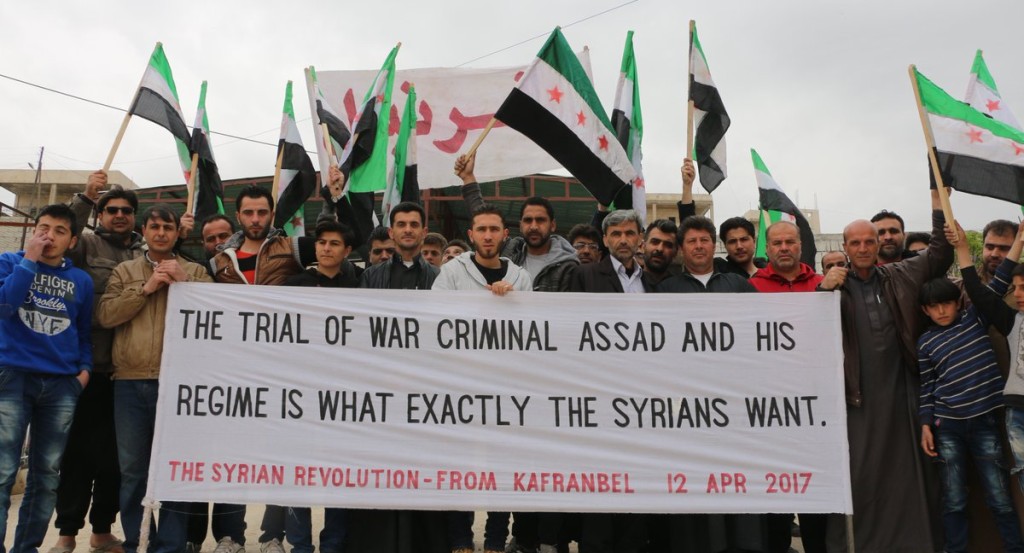 The protesters also expressed support for Friday’s US missile strikes on the Assad regime base from which a deadly chemical attack was launched on Khan Sheikhoun: 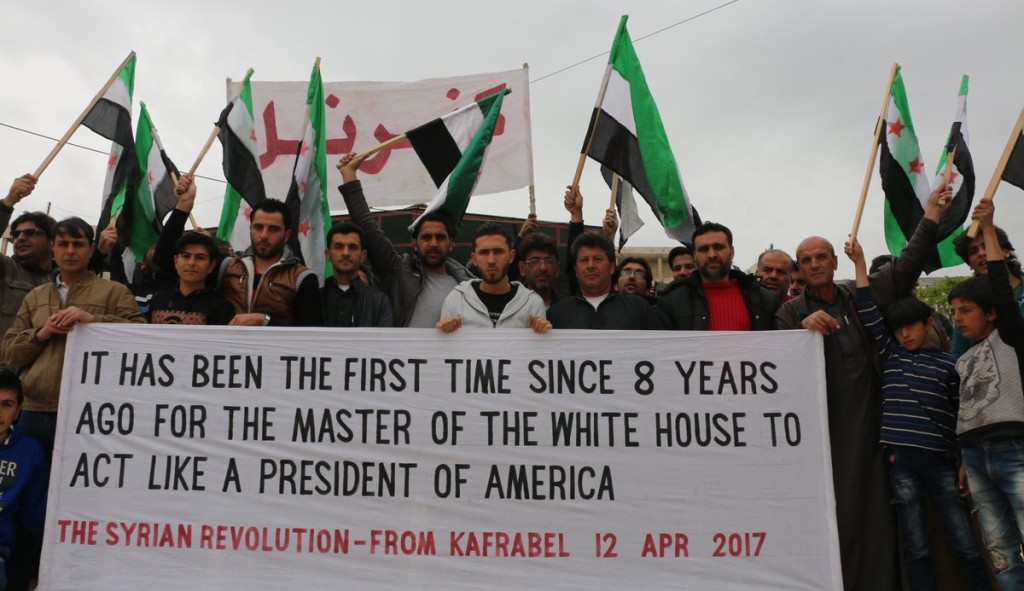 Rebels and civilians are being displaced from Madaya and Zabadani, northwest of Damascus, cut off by regime forces and Hezbollah since July 2015. In Idlib Province, people will be moved from al-Fu’ah and Kafraya, surrounded by rebels for two years.

“It has been decided that tomorrow the agreement will be carried out,” said a foreign pro-Assad commander.

Hezbollah’s media outlet said 19 hostages were transferred from al-Fu’ah and Kafraya on Tuesday under the supervision of the Syrian Arab Red Crescent. In return, rebels released several prisoners and seven bodies. 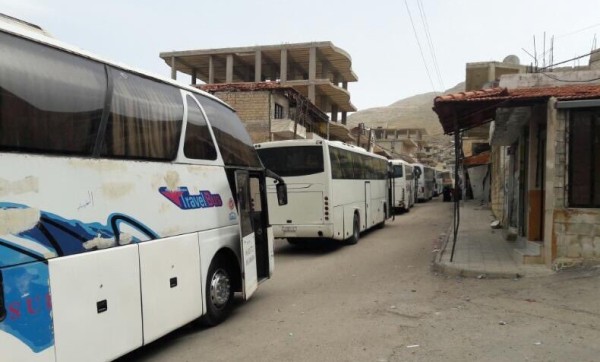 Qatar mediated the agreement, with Hezbollah and the leading rebel faction Ahrar al-Sham instrumental in reaching a deal. Other rebel factions have criticized the arrangement as a forced displacement of civilians from Madaya and Zabadani, following similar pro-Assad efforts to clear people from suburbs of Damascus, from eastern Aleppo city, and from the al-Wa’er district in Homs.

The agreement also includes aid deliveries and the release of 1,500 detainees in Assad regime prisons.

A protest in southern Damascus against the deal: