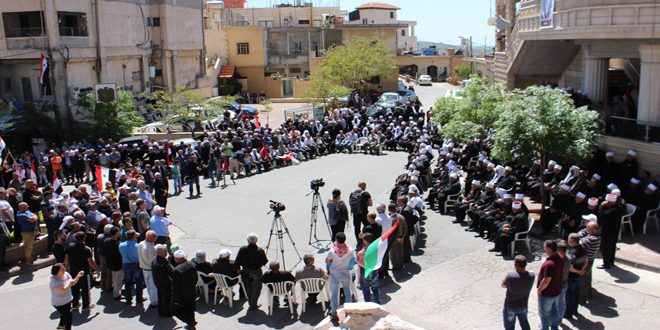 Regime media: “The Syrian people are fighting the battle of destiny against the most aggressive war”

UPDATE 1430 GMT: The opposition Syrian National Coalition has issued its own message for Syria’s Independence Day:

Through words and deeds as well as the unrelenting resolve to achieve their goals, the Syrian people have showed that they will carry on with their struggle until they achieve victory, regain freedom, and defeat the tyrannical Assad regime, its allied occupation and the forces of terrorism in Syria.

May our wounded recover, our detainees be free, and our fallen heroes rest in peace. Long live Syria and the Syrian people, free and with honor.

ORIGINAL ENTRY: Syria marked the 71st anniversary of its independence from France on Sunday, but few Syrians appeared to note the occasion.

A statement on State outlet SANA proclaimed, “On Independence Day, the Syrians recall the greatest war stories and acts of heroism ever written down by their ancestors who sacrificed their lives for the sake of the homeland’s sovereignty, steadfastness, and unity.”

It then jumped to the present to try and rally support, “Today, the Syrian people are fighting the battle of destiny against the most aggressive war in which colonial powers and terrorist organizations are involved in order to maintain their country’s sovereignty and independence.”

The head of the Damascus branch of the Veterans Guild, Major Gen. Mohammed al-Shamali, declared, “Today, Syria is so close to expel Wahabi terrorists sent by Saudi Arabia, Qatar, and Turkey and backed by the same colonial powers and achieve victory under the leadership of President Bashar al-Assad.”

But photographs showed only small groups gathered for staged pictures and for marches. 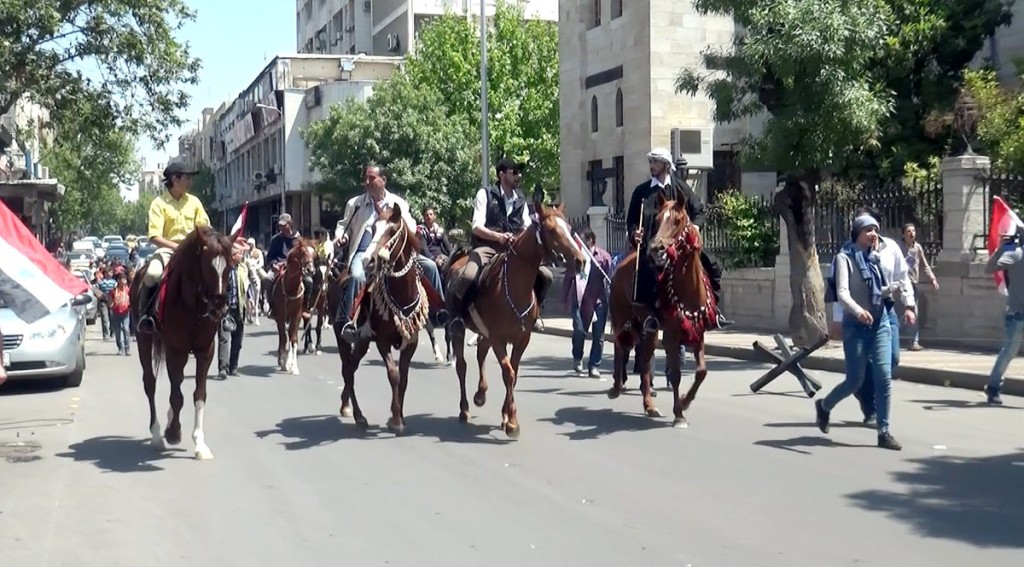 Druze in the Golan Heights: 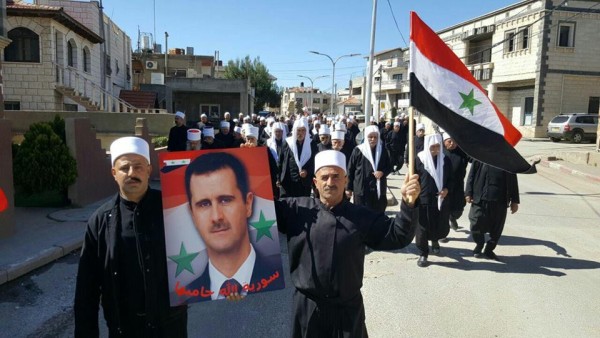 In its latest attempt to divert blame from the Assad regime for the deadly chemical attack on April 4 in northwest Syria, Russia’s Defense Ministry claims, “The town [of Khan Sheikhoun in Idlib Province is living its life.”

At least 93 people died and almost 600 were injured from the effects of a hybrid nerve agent and chlorine, in a missile fired by an Su-22 jet fighter, but the Ministry insisted that no evidence of this existed.

The Ministry asserted, “Neither locals nor pseudo-rescuers have even asked for medicines, antidotes, decontaminants” — conveniently omitting that all of the victims were taken elsewhere in northwest Syria or into Turkey for treatment because Khan Sheikhoun’s only hospital was bombed during the chemical attack.

The Ministry also ignores the doctors, rescuers, journalists, and witnesses of the attacks, as well as footage and photographs to insist, “The only ‘proof’ of the use of chemical weapons remain only two White Helmets videos.”

The Russian outlet Sputnik tried to obscure the situation in Khan Sheikhoun by posting a photograph, purportedly of the town, which in fact was of Aleppo city 10 months ago:

And as we know that this is a LIE, we try to confuse you w/ a June 2016 picture from #Aleppo to illustrate the "not identified impact zone". pic.twitter.com/RxLsrcWzTV

Video: Aftermath of Russian Bombing on Village in Idlib Province

Rescuers dig through rubble after an overnight attack by Russian warplanes on the village of Maarat Hurmah in Idlib Province, causing multiple casualties:

Despite US missile strikes 11 days ago, responding to the Assad regime’s deadly chemical attack in the province, Russian and Syrian air forces have stepped up conventional bombing. On Tuesday, attacks by Russian warplanes knocked out another hospital, providing maternity and child care, in the Jabal al-Zawiya area (see Tuesday’s Syria Daily).

Nine children of the same family were reportedly killed in Maarat Hurmah: