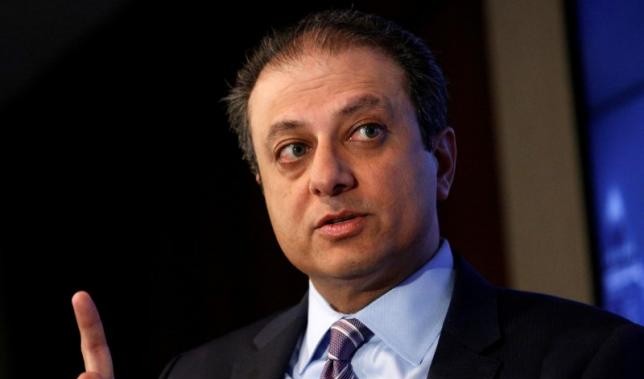 Manhattan’s US Attorney Preet Bharara: “I did not resign. I was fired”

Developments on Day 51 of the Trump Administration:

The furor over the Trump Administration’s dismissal of 46 US attorneys grows, as the President fires Manhattan Prosecutor Preet Bharara after he refused to quit.

Bharara said in a statement: “Serving my country as U.S. Attorney here for the past seven years will forever be the greatest honor of my professional life, no matter what else I do or how long I live….”One hallmark of justice is absolute independence, and that was my touchstone every day that I served.”

I did not resign. Moments ago I was fired. Being the US Attorney in SDNY will forever be the greatest honor of my professional life.

On Friday, Attorney General Jeff Sessions suddenly ordered the 46 attorneys, out of 93 federal prosecutors, to submit letters of resignation. Bharara was called by the acting Deputy Attorney General, Dana Boente, with the message (see Saturday’s TrumpWatch).

The prosecutor for Manhattan since 2009, Bharara has been prominent for securing insider-trading settlements from Wall Street firms and winning criminal convictions in high-profile corruption and terrorism cases.

Bharara’s office was also investigating Fox News over possible violations of securities law, when it made payments in a sexual harassment scandal that led to the departure of chairman Roger Ailes.

A source told CNN that Boente called Bharara on Saturday to ask if it was true that he was refusing to resign. After the prosecutor said yes, Boente phoned back and said Trump was firing him.

On Thursday, Trump tried to reach Bharara through a White House assistant who left a voice mail, a “source familiar with the call” said.

The prosecutor refused the call because of a protocol maintaining the independence of the judicial branch from the White House. He notified Attorney General Sessions’ chief of staff, citing the rules against US attorneys talking to the President. Bharara then called Trump’s assistant and explained the situation.

Then President-elect Trump had told Bharara in November that the prosecutor would be retained by the new Administration.

In a statement issued Saturday evening, the Senate Judiciary Committee Chairman, Patrick Leahy, said the abrupt firing of the US attorneys is “another reminder that the independence of the Justice Department is at risk under this administration”.

“The Senate will now have to carefully evaluate the President’s selected replacements,” Leahy asserted.

Key GOP Legislator: Flynn “Did US Favor by Talking to Russian Ambassador”

GOP Representative Devin Nunes, who heads the HouseIntelligence Committee, raises doubts that Republicans will pursue an investigation of the links between Donald Trump’s associates and Russia.

Nunes defended Michael Flynn, dismissed as National Security Advisor last month after disclosures of his five conversations with Russian Ambassador Sergei Kislyak, including the assurance that the Trump Administration would ease sanctions on Moscow.

“From everything that I can see, his conversations with the Russian ambassador, he was doing this country a favor, and he should be thanked for it,” Nunes said.

Nunes has publicly criticized the allegations that Trump’s associates were in contact with Russian officials.

Some Democrats on the Intelligence Committee are threatening to pull support from the investigation into Russia’s interference in the 2016 election if it is not conducted in a “legitimate” manner.

“I’m not going to be part of a dog-and-pony show that is not a serious effort to do an investigation, because this is really serious,” California Representative Jackie Speier said. “If it’s not a legitimate and comprehensive and in-depth investigation, why would we be party to it?”

Connecticut’s Jim Himes echoed, “Most of us would agree that there’s no way we’re participating in any form of cover-up or whitewash, so we will walk away if the moment requires.”

The committee’s top Democrat, Adam Schiff, said, “If we get to the point at any time where…there are legitimate lines of investigation that are being walled off, then I will say so.”

The first committee hearing is scheduled for March 20.

The House Intelligence Committee gives Donald Trump a Monday deadline for any evidence of the President’s allegation that Barack Obama ordered the wiretapping of Trump Tower during the 2016 election.

GOP Chairman Devin Nunes and ranking Democrat Adam Schiff made the request in a letter to the White House.

Apparently recycling a rumor spread by a conservative radio talk show host and Breitbart, Trump declared in a series of tweets on March 4 that Obama authorized the surveillance. He has since avoided producing any information to support the claim.