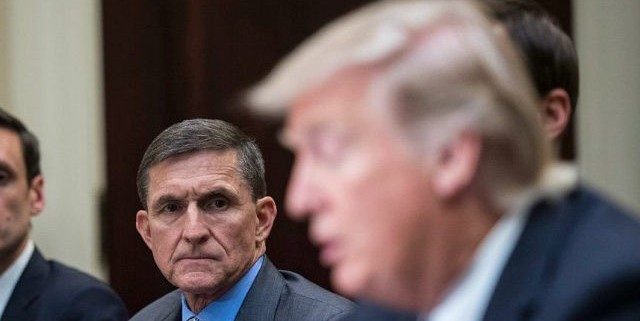 Developments on Day 50 of the Trump Administration:

The Trump Administration is beset by renewed turmoil over Michael Flynn, who resigned as National Security Advisor last month because of his conversations with Russian Ambassador Sergei Kislyak.

The latest controversy is over Flynn’s role as a paid foreign agent for the Turkish Government, even as he was nominated to become NSA.

Flynn’s attorneys informed the incoming White House legal counsel, Don McGahn, during the transition that the former general might need to register with the Government as a foreign agent. However, the Trump team took no action and said that it did not need to be involved.

The firm Flynn Intel Group was hired for $500,000 last year by the Netherlands-based firm Inovo BV — owned by Turkish businessman Ekim Alptekin, who is close to Turkish President Recep Tayyip Erdoğan. The contract ended at some point after the November 8 US election.

Flynn’s firm investigated self-exiled Turkish cleric Fethullah Gülen, who resides in Pennsylvania. Erdoğan, who split from Gülen in 2013, is seeking the cleric’s extradition and accusing him of organizing a coup attempt in July 2016.

The investigation included payments to several former FBI officials, a retired admiral who served in a top intelligence role for the Joint Chiefs of Staff, and a behavior analysis firm operated by two former FBI agents.

Flynn disclosed that information to the Justice Department earlier this week when registering as a foreign agent for the Turkish government.

It is unclear what services Flynn, a retired lieutenant general, sought from the retired intelligence officials. But the firm’s $530,000 lobbying contract with its client, a Turkey-connected shell company called Inovo BV, centered on Fethullah Gulen, a cleric living in exile from Turkey in Pennsylvania.

Flynn, writing on November 8 for The Hill newspaper, supported the extradition:

The primary bone of contention between the U.S. and Turkey is Fethullah Gülen, a shady Islamic mullah residing in Pennsylvania whom former president Clinton once called his ‘friend’ in a well circulated video.

Gülen portrays himself as a moderate, but he is in fact a radical Islamist.

Last Tuesday, Flynn filed paperwork with the Justice Department identifying himself as a foreign agent. The revelation followed on Friday that Flynn’s attorneys had twice told Trump’s legal counsel team of his possible plans to register as a foreign agent.

A White House official confirmed both calls, but said that Flynn’s attorneys had simply been seeking guidance, which Trump’s legal team said it was unable to provide.

Trump was never informed of the discussion, the White House maintained.

Attorney General Jeff Sessions suddenly asks for the resignations of the 46 chief federal prosecutors left over from the Obama Administration.

The prosecutors include Manhattan US Attorney Preet Bharara, who had been asked to remain on November 30 after a meeting with President-elect Trump.

Bharara said he was phoned by Dana Boente, the acting Deputy Attorney General, with the instruction to resign.

A “senior administration official” said, despite the abruptness of the firings, “Been in the works for awhile. Decided to pull the trigger today. We were always planning for it on about Day 50.”

A Justice Department spokesman said on Friday that Trump had called Boente to decline his resignation. Trump also called Rod Rosenstein, his pick to take over as Deputy Attorney General, to keep him in his post.

The Justice Department maintained, “Until the new U.S. attorneys are confirmed, the dedicated career prosecutors in our U.S. attorney’s offices will continue the great work of the department in investigating, prosecuting, and deterring the most violent offenders.”

US District Judge William Conley blocked enforcement of the policy to deny entry to the family of a Syrian refugee already granted asylum in the US.

The refugee brought the case anonymously to protect the identities of his wife and daughter, still living in Syria’s largest city Aleppo.

Several legal challenges have been filed against Trump’s revised executive order, signed Monday, barring the issuance of visas and acceptance of refugees from six mainly-Muslim countries. The ban is due to go into effect on March 16.

Conley concluded the plaintiff “has presented some likelihood of success on the merits” of his case and that his family faces “significant risk of irreparable harm” if forced to remain in Syria.

Tillerson: No Journalists on Plane to Asia

Secretary of State Rex Tillerson refuses to take journalists on the plane for his trip to Asia.

The State Department gave varying reasons for the denial, including cost-cutting — even though media outlets pay for their seats:

So I have now heard 3 explanations 1) plane too small 2) save money 3) don't want us there. I'm beginning to think it is 3). #justahunch. https://t.co/zJtqRxkRuO

Tillerson has not given any interviews, and has refused questions in photo opportunitiess with visiting dignitaries.

State Department spokesperson Mark Toner is surprised to learn that the Mexican Foreign Minister is in Washington to meet senior White House staff.

Foreign diplomats are usually received by the Secretary of State, but Toner said, when asked if the Department’s officials would meet

“We’ll take that and get back to you. I was unaware that he was — the foreign minister was in town,” Toner said when asked whether State officials would see Luis Videgaray.

Average hourly earnings climbed by 2.8% on a year-on-year basis.

Donald Trump quickly took credit for the increases, a claim treated by scepticism by economists.

Journalists noted that Trump dismissed the ongoing reports of job increases last year as “phony”, leading Press Secretary Sean Spicer to declare, “I talked to the President prior to this [briefing], and he said to quote him for this, ‘They may have been phony in the past, but it’s very real now.'”

A US district court rules that Congressional redistricting after the 2010 census in Texas was intentionally designed to dilute and diminish the votes of minorities.

The 2-1 decision found the “gerrymandering” of the boundaries of certain districts violated both the Voting Rights Act and the Equal Protection Clause of the US Constitution.