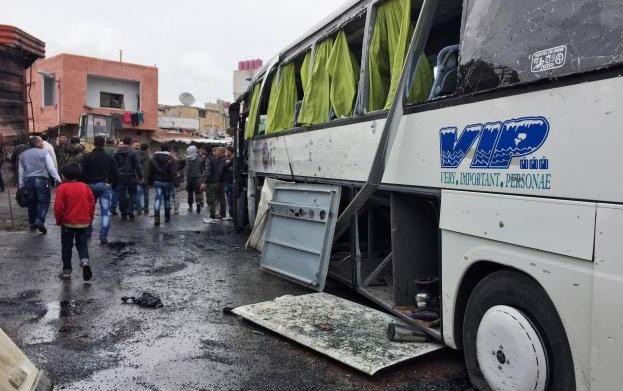 HTS, led by Jabhat Fatah al-Sham (formerly Jabhat al-Nusra), said on Sunday that the attack targeted Iranian-backed militias for their role in supporting President Assad’s “tyrannical rule” and their responsibility for “killing and displacing” Syrians.

Initial reports said more than 40 people were killed, while later claims said the toll had risen to more than 70. Local sources said both civilians and fighters were among the dead.

The Assad regime and Iraq’s Foreign Minister had said that all the victims were “pilgrims”. The location of the bombing was near a Shia Muslim shrine in southern Damascus.

On Sunday, President Assad told a European parliamentary delegation that “the wrong polices pursued by several European countries towards Syria and the region” led to the spread of terrorism to Europe and large numbers of refugees.

He made no apparent comment about the Damascus bombings.

A pro-rebel outlet reports that a new truce agreement has been reached between the opposition and the Assad regime over the besieged opposition-held district of al-Wa’er in Homs city.

A correspondent for the Revolutionary Forces of Syria Media Office said the deal was negotiated under Russian auspices.
Terms include evacuation of fighters and their families, as well as civilians who want to leave, to areas in Homs and Idlib Provinces and Jarablus on the Turkish border.

The Homs Media Centre said an agreement had been reached, but that the ultimate destination of the fighters had not been decided.

The removal of about 15,000 people is expected to begin in a week, with the first departure including about 1,500.

Pro-Assad forces and militias are to open humanitarian corridors and allow entry of employees, doctors, and students. Shelling and other attacks will be halted.

Al-Wa’er, the last opposition neighborhood in Homs city, has been surrounded since 2013. The Assad regime and its allies have maintained regular bombardment, despite earlier truces.

Robert Ford, the former US Ambassador to Syria, noted that today’s agreement had been reached in part by the Assad regime’s violations:

The judicial committee of Douma, the opposition-held town northeast of Damascus, has ordered the re-opening of all NGO office shut last week during a raid on a magazine which published an article accused of blasphemy.

However, the committee maintained the closure of Rising for Freedom, which apologized for the article and said it was solely the author’s opinion, following the attack by a crowd on the offices.

Staff of the NGOs, including the Violations Documentation Center, said the police refused to intervene.

Rising for Freedom still faces prosecution. A source at the court hearing said judges accused a journalist of apostasy — “They see anything tied to media outlets as heretical” — with locals preventing an arrest through their protests.

A leaflet has been spread throughout Ghouta w pix of activists supposedly tied to z mag (some aren't), calling for to expel them from Ghouta pic.twitter.com/2HeeGRyKn4