Yesterday’s discussion with Erdoğan came amid a four-sided tangle in northern Syria, involving a Turkey-rebel offensive, the Russian-supported pro-Assad forces, the leading Kurdish faction, and the Islamic State.

The Turkish-rebel force, which has advanced since last August against ISIS from the Turkish-Syrian border into Aleppo Province, is now clashing with the Kurdish-led, the US-supported Syrian Democratic Forces. The fighting is centered on the area west of the SDF-held city of Manbij, which Erdoğan has vowed to capture.

However, both the US and Russia have supplied armored vehicles, equipment, special forces, and military advisors to the SDF. Meanwhile, the SDF has turned over several villages west of Manbij to pro-Assad forces.

Erdoğan did not mention Manbij in Friday’s press conference, declaring, “Of course, the real target now is Raqqa,” the Islamic State’s central position in northern Syria.

Turkey is insisting that the Kurdish militia YPG has no involvement in the Raqqa offensive. The US Government is reportedly split over the issue.

Ankara considers the Syrian Kurdistan Democratic Union Party (PYD) and its YPG militia to be part of the Turkish Kurdish insurgency PKK, which has fought Turkish security forces for more than 30 years.

Putin avoided any public engagement with the difficult issues, instead hailing the rapprochement between Russia — the essential backer of the Assad regime — and Turkey since summer 2016: “We rate very highly the level of interaction achieved between the special services of Russia and Turkey and between the two countries’ military.”

The Russian leader hailed the nominal ceasefire — declared on December 30 by Russia, Turkey, and Iran but never observed by the Assad regime — as the product of the reconciliation with Erdoğan, “This is a tangible result of our joint work.

I want to express cautious optimism over the possibility that by joining efforts and involving other reputable players, including the United States, we will succeed in effectively contributing to the strengthening of the ceasefire and switching on this ground to full-fledged political settlement.

Naturally, the principle of the territorial integrity of states must be observed for peace and calmness to persist in the region and for the start of the process of rebuilding Syria and other countries of the region.

In this sense, the restoration of the territorial integrity of Syria is, in our mind, an obligatory condition for full-fledged settlement.

Assad Objects to Turkish and US Troops in Northern Syria

Speaking with a Chinese TV station, President Assad has objected to the presence of Turkish and US troops in northern Syria, amid the four-sided battle between a Turkish-rebel offensive, pro-Assad forces, the Kurdish-led Syrian Democratic Forces, and the Islamic State:

Any foreign troops coming to Syria without our invitation or consultation or permission, they are invaders, whether they are American, Turkish, or any other one. And we don’t think this is going to help. What are they going to do? To fight ISIS? The Americans lost nearly every war. They lost in Iraq, they had to withdraw at the end. Even in Somalia, let alone Vietnam in the past and Afghanistan, your neighboring country. They didn’t succeed anywhere they sent troops, they only create a mess; they are very good in creating problems and destroying, but they are very bad in finding solutions.

The US announced this week that 400 more troops will deployed in support of the Kurdish-led SDF, which in turn has been backed by Russia and given several villages to the pro-Assad forces.

President Assad is upset about the Academy Award for a film documenting the work of White Helmets rescuers.

In a rambling answer, Assad told a Chinese TV outlet:

We have to congratulate [the jihadists of Jabhat] al-Nusra for having the first Oscar! This is an unprecedented event for the West to give Al Qaeda an Oscar. This is unbelievable, and this is another proof that the Oscars, Nobel, all these things are politicized certificates, that’s how I can look at it.

Russia and the regime, supported by pro-Assad activists, have spent years trying to discredit the work of the White Helmets, who have saved more than 80,000 lives since their formation in 2013.

The propaganda campaign has never produced any evidence of White Helmets involvement with “Al Qa’eda”.

White Helmets Rescuer Killed by ISIS Mine in al-Bab

Hamdo Qabalani, a White Helmets rescuer, has been killed by a mine explosion in the city of al-Bab in Aleppo Province, captured by a Turkish-rebel offensive from ISIS last month. 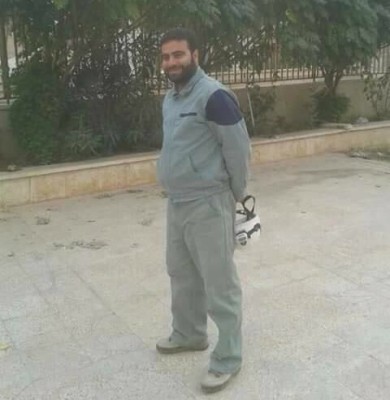