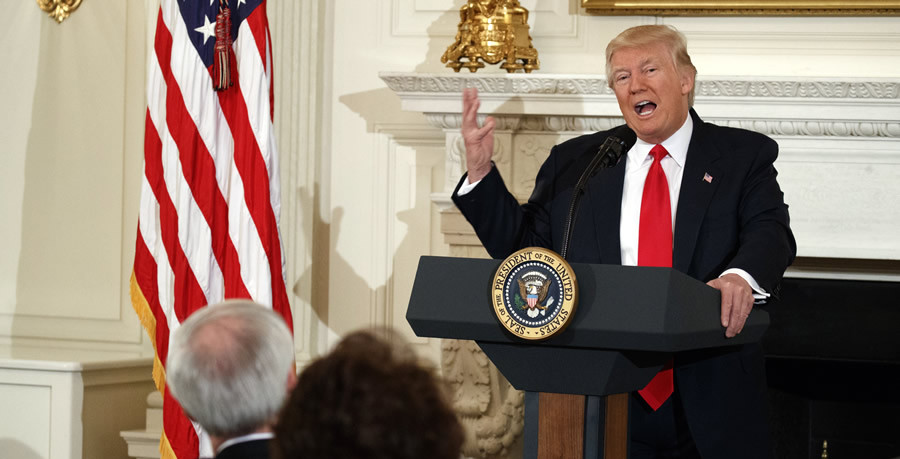 Developments on Day 39 of the Trump Administration:

Trump “Nobody Knew Health Care Could Be So Complicated”

Donald Trump appears to come face-to-face with the challenge of fulfilling his promise to repeal and replace ObamaCare.

Speaking at a meeting with governors, Trump declared:

We have come up with a solution that’s really, really I think very good. Now, I have to tell you, it’s an unbelievably complex subject. Nobody knew health care could be so complicated.

Despite further proclamations, in a meeting with health insurers, that the plan would be “fantastic” and “something special”, Trump offered no indication of what the replacement for the Affordable Care Act would include.

Instead, he told the CEOs of the insurance companies, “If things don’t work out, I’m blaming you anyway.”

In contrast to Trump’s vague but loud announcements, the governors pointed to the growing challenge for any attempt to repeal the Affordable Care Act.

The GOP Governor of Nevada, Brian Sandoval, said: “Of course I am concerned. I am someone who elected to expand Medicaid. That’s been very beneficial to my state, and I want to be sure those individuals can keep their coverage.”

None of the governors made a commitment to a replacement which would reduce coverage.

In the past week, other leading Republican politicians, including former Speaker of the House John Boehner, have said that it is not realistic to remove ObamaCare, which has covered more than 20 million Americans who were previously uninsured. Instead, they have said the proper course is reform the Affordable Care Act.

But Trump maintained, “People hate [ObamaCare] but now they see that the end is coming and they’re saying, ‘Oh, maybe we love it.’ There’s nothing to love. It’s a disaster, folks.”

And he indicated that he would delay other headline policies until the Affordable Care Act was repealed: “Statutorily and for budget purposes, as you know, we have to do health care before we do the tax cut.”

Trump “Obama is Behind Protests”

Donald Trump blames Barack Obama for protests, including at town hall meetings, that are challenging his Administration.

Trump told Fox and Friends, in an interview to be broadcast Tuesday morning:

The day after Trump’s inauguration, millions joined Women’s Marches in the US and other countries. The rallies have continued, and Republican legislators have faced tough questioning at town hall meetings. Some GOP politicians have cancelled or refused the schedule the meetings.

“Trump Signed Off on Phone Checks for White House Staffers”

President Donald Trump signs off on Press Secretary Sean Spicer’s decision for phone checks of White House staff, in an effort to stop leaks of information, according to “multiple sources” speaking to CNN.

Spicer’s demand, in an “emergency meeting” on Sunday, was soon leaked to the press.

The sources also said the President approved Spicer’s blocking of prominent outlets — including CNN, The New York Times, and the BBC — from his press briefing last Friday.

Spicer denied that Trump was involved in either decisionHe”he did not sign off or even know what I did. That is not accurate. I don’t believe he even knew there was a gaggle and in no way was it discussed with him or any other staffer.”

The sources said Trump and his top advisers also knew of the approaches that Spicer and others made to intelligence chairmen and other government officials, hoping to push back on news accounts of Russian links with the Trump campaign and administration.

Promoting a book of his paintings, Bush backed an investigation into ties between the Trump campaign: “We all need answers”. He stopped short of calling for a special prosecutor, sayingthat if Senate Intelligence Committee Chairman Richard Burr made the recommendation, “it would have a lot more credibility with me”.

I consider the media to be indispensable to democracy. We need the media to hold people like me to account. Power can be very addictive, and it can be corrosive, and it’s important for the media to call to account people who abuse their power, whether it be here or elsewhere.

And the former President gently broke from Trump’s immigration crackdown: “I’m for an immigration policy that’s welcoming and upholds the law.”

Attorney General Jeff Sessions says he will crack down on the distribution and recreational use of marijuana.

“Experts are telling me there’s more violence around marijuana than one would think,” Sessions said.

The Attorney General offered no support for his claim.

Cannabis is legal for recreational adult use in eight states and Washington, DC. California, Maine, Massachusetts, and Nevada all voted to legalize the drug this November. The legalized industry was $6 billion in 2016 and is estimated to reach $50 billion by 2026.

Medical use is allowed in 28 states.

The Justice Department drops its opposition to a voter ID law in Texas.

Danielle Lang, the Campaign Legal Center’s deputy director of voting rights, said the Justice Department informed her group and others suing the state of the Government’s change in position after six years of legal disputes.

The Justice Department will no longer argue that Texas intentionally sought to discriminate against minorities when it passed the law that mandates voters show certain forms of identification before casting a ballot.

This signals to voters that they will not be protected under this administration.

We have already had a nine-day trial and presented thousands of pages of documents demonstrating that the picking and choosing of what IDs count was entirely discriminatory and would fall more harshly on minority voters. So for the [Justice Department] to come in and drop those claims just because of a change of administration is outrageous.

A federal appeals court struck down the voter ID law a few months before the 2016 elections on the grounds that it had a discriminatory effect, but it sent the question about intent back to the lower courts. The Supreme Court rejected Texas’s appeal earlier this year on the core question of discrimination.

The Justice Department is expected to lay out its new position during a hearing on Tuesday. Attorney General Jeff Sessions supports voter identification laws as long as they are “properly drafted”, and he has voiced scepticism about the Voting Rights Act.

The US State Department deletes a tweet of congratulations for the Oscar-winning Iranian film The Salesman.

But the tweet apparently was withdrawn because of objections — from someone with the State Department, according to a source — to Farhadi’s criticism of Donald Trump’s “Muslim Ban” hoping to suspend visas for citizens of seven mainly-Muslim states.

In a speech read by two Iranian-Americans representing him, Farhadi said, “Dividing the world into the ‘us’ and ‘our enemies’ categories creates fear, a deceitful justification for aggression and war.”

“A congratulatory tweet was posted,” a State Department spokeswoman said. “We later removed the post to avoid any misperception that the USG [US government] endorsed the comments made in the acceptance speech.”

The @USAdarFarsi account sent best wishes on January 24 to Farhadi after the announcement of The Salesman’s nomination. That tweet is still online.