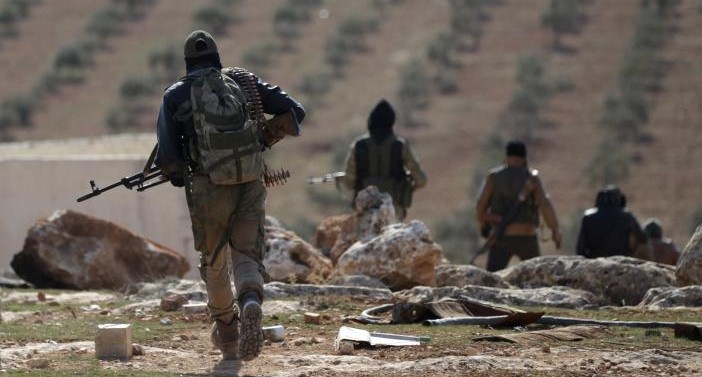 PHOTO: Rebels on the outskirts of al-Bab in Aleppo Province on Wednesday (Khalil Ashawi/Reuters)

The Assad regime may soon confront Turkey, and the Syrian rebels with whom Ankara is fighting, in Aleppo Province in northwest Syria.

The possibility has been fuelled by the convergence of both pro-Assad forces and an ongoing Turkish-rebel offensive on al-Bab, northeast of Aleppo city and the last major position of the Islamic State in the province.

The Turkish-rebel air and ground assault begin in early December. It has struggled to advance against ISIS resistance, although it claimed progress on Thursday:

Meanwhile, a pro-Assad force has moved from the southwest of al-Bab to within six km (3.5 miles) of the town.

Syria’s military command said on Thursday that its advance had recaptured 32 towns and villages from Islamic State, as well as a 16-km (10 mile) portion of the highway from Aleppo city to al-Bab.

“This achievement widens the secured areas around Aleppo city and is the starting point for (further) operations against Daesh [Islamic State],” a military spokesman said on State TV.

In a remark implicitly directed at Turkey, the spokesman said the military “confirms its commitment to…protecting civilians and maintaining the unity of the territory of the Syrian Arab Republic”.

A “source in the military alliance” supporting the regime said the pro-Assad force was ready “to clash with the FSA [Free Syrian Army] fighting” alongside Turkey, if necessary.

The regime’s Foreign Ministry sent letters to the UN condemning “Turkey’s repeated crimes and attacks against the Syrian people and violations of the sanctity and unity of Syria’s territory”.

The letters to the Secretary-General and to the President of the Security Council criticized the Turkish-rebel capture of villages west of al-Bab.

A confrontation would unsettle a de facto partition of northwest Syria, fostered by Russian-Turkish discussions since last summer.

Spurred by a reconciliation between Turkish President Recep Tayyip Erdoğan and Russian counterpart Vladimir Putin, Ankara accepted the pro-Assad recapture of all of Aleppo city. Moscow acceded to the Turkish military intervention alongside rebel factions, taking much of Aleppo Province — including a 55-km (34-mile) corridor along the Turkish-Syrian border — from the Islamic State.

Russia has been an essential ally of the Assad regime since the 2011 uprising, propping up Damascus with military intervention from September 2015. However, it has offered token assistance to Turkey with recent airstrikes near al-Bab.

Ankara has said that it will not hand over al-Bab to the regime until a political settlment is reached.

Talks last week in the Kazakhstan capital Astana, brokered by Russia and Turkey, made little advance towards a resolution between the regime and an opposition-rebel bloc. Sources have said that the discussions will resume in Geneva on February 20.

Other factions merged into the leading rebel group Ahrar al-Sham, which pledged to protect them.

But Sheikh al-Mahdi plays down the prospect of more conflict, “This is the first merger these days that has included groups that have real power….We aspire to the unity of all groups.”

He insists that “there is no enmity or hatred between the soldiers or leaderships” of HTS and Ahrar al-Sham: “On the contrary there are bridges and a relationship.”

The cleric says of HTS’s new leader Abu Jaber, “He is a friendly person and has way of getting people together.”

Sam Heller, a leading analyst of the conflict, assesses that Jabhat Fatah al-Sham’s attacks and the creation of HTS are aimed at scuttling rebel involvement in political talks, renewed earlier this month in the Kazakhstan capital Astana and proposed to continue in Geneva on February 20:

The attack by Fatah al-Sham was an attempt to liquidate some of the more relevant [rebel] factions that had lent their credibility to Astana and these various other rounds of international negotiations.