Syria Analysis: A War Between Jihadists and Rebels? 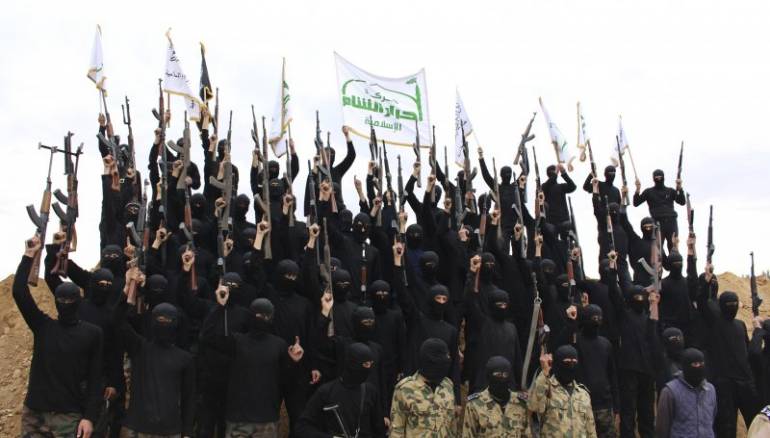 UPDATE 1915 GMT: Jabhat Fatah al-Sham has issued a statement that “no one was killed” in its operations against rebels. It says prisoners have been set free after ‘briefing them on the goal of the operations”.

Footage of the captured headquarters of the Suqour al-Sham faction in Jabal al-Zawiya in Idlib Province:

A senior official of the rebel faction Suqour al-Sham has said all of the group’s leadership has resolved to “resist” until the last against #JFS:

Jaish al-Islam is best known for its leading position among rebels near Damascus, but also has units in northwest Syria.

UPDATE 0945 GMT: Reports this morning indicate that the situation between Jabhat Fatah al-Sham and rebels has eased, although some clashes continue.

A well-placed source inside Syria says the leading faction Ahrar al-Sham tried on Tuesday to prevent fighting. Some rebels saw the intervention as an attempt to protect Jabhat Fatah al-Sham; others said Ahrar was unsure that orders to fight would be carried out by all rebel battalions.

[A commander in Ahrar al-Sham subsequently confirmed the faction’s effort to halt conflict.]

Other sources confirm claims on social media that JFS/Nusra has occupied most of the front with the Assad regime west of Aleppo and “a few villages in Idlib Province”.

ORIGINAL ENTRY: The jihadists of Jabhat Fatah al-Sham and rebel factions are fighting in northwest Syria in the biggest clashes since the end of 2014, with some observers warning of a war between JFS — formerly Jabhat al-Nusra, linked to Al-Qa’eda until July 2016 — and the rebels alongside whom they have fought since 2013.

The fighting broke out on Monday when JFS/Nusra surrounded the headquarters of large rebel factions across Idlib and Aleppo Province. The jihadists reportedly moved much of its force surrounding the regime enclaves of al-Fu’ah and Kafraya in Idlib Province to launch the assaults.

“Multiple” casualties, with other fighters captured by JFS/Nusra, were reported in both Idlib and Aleppo Provinces. A Jaish al-Mujahideen commander appealed to rebels, “We won’t beg for your assistance, help us if you will… Better to die standing up rather than survive humiliated”.

Local sources said on Tuesday night that the situation was “mostly muddy”, with difficulty in getting reliable information because of disruption to communications, in part because of JFS/Nusra blocking the Internet in its move against the rebel headquarters.

However, they assessed that JFS/Nusra had been joined by the fighters of Jund al-Aqsa, most of the former rebel faction Nur ed-Din al-Zinki, and some small “jihadi groups” in a fight against “everyone else”.

Only last weekend, Jabhat al-Nusra appeared to have averted a showdown by declaring the removal of protection from Jund al-Aqsa, accused of attacks against rebel groups throughout northwest Syria.

“Too Early to Speak of All-Out Conflict”

The well-placed sources, with contacts with both sides, said that the reports of fighting were serious. They expressed fear of “the start of an all-out war like 2014”.

In November 2014, Jabhat al-Nusra moved against the US-supported Syrian Revolutionary Army and Harakat al-Hazm. Within weeks, they had defeated both groups, forcing commanders and fighters to retreat into Turkey.

Sources noted that the prospect of conflict was even greater now, as both SRF and Harakat were widely disliked by other rebel factions, who accused them of theft and war profiteering, while Jaish al-Mujahideen — formed from a merger of rebel units in May 2016 — is held in higher regard.

Still, the sources said rebels were not yet looking for a war with JFS/Nusra: “It’s way too early to speak about a group-on-group conflict”. They added that most of JFS/Nusra’s seizure of positions occurred without bloodshed — JFS/Nusra said because of agreement with the fighters stationed there; attacked groups said to avoid bloodshed — and that “goals as well as alliances can change within minutes”.

The sources also said that a war might be averted because of a lack of will on each side:

Lots of rebels ordered to join fights against JAA/JFS will do nothing or defect to prevent both sides from fighting. On the JFS side we will see not only defections but also men not fighting, even at the risk of punishment.

So far, while there are clashes in some areas, we don’t see an all-out war across Idlib + rural Aleppo.

“No One Can Predict the Outcome”

But what if the clashes did expand into war?

The sources evaluation that “rebel factions totally outnumber JFS, Jund al-Aqsa, and their allies”, and that the factions have recently obtained “lots of arms, ammo, and supplies” from outside Syria. While JFS/Nusra have “huge stocks” of weapons, they cannot resupply but have to depend on taking more arms from battles with Assad forces or the rebels.

However, the sources continued, “That’s the numbers, but it’s not a numbers game. It’s people acting. The bottom line is, that in an all-out war, no one can predict the outcome.”