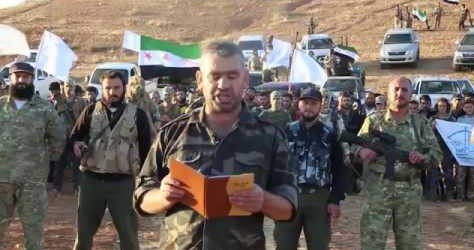 PHOTO: Formation of the rebel faction Jaish al-Mujahideen, now under attack by the jihadists of Jabhat Fatah al-Sham, May 2016

UPDATE 1745 GMT: Local sources report uncertainty over the extent of the fighting between the jihadists of Jabhat Fatah al-Sham and the Syrian rebels:

Overall the situation is still mostly muddy. From many areas we can’t get solid accounts due to cut communications, and not everything the leaders say materializes on the ground. For some events there are totally different reports, and unfortunately in most cases it’s impossible to verify.

Now see Syria Analysis: A War Between Jihadists and Rebels?

ORIGINAL ENTRY: The dispute between Syria’s rebels and the jihadists of Jabhat Fatah al-Sham has erupted into fighting across the northwest of the country.

Reports this morning indicate that, after months of tension and occasional clashes, the confrontation has escalated with JFS — formerly known as Jabhat al-Nusra and linked to Al Qa’eda until July 2016 — surrounding the headquarters of the large rebel faction Jaish al-Mujahideen in Idlib Province.

Other large factions, such as Ahrar al-Sham, Faylaq al-Sham and Suqour al-Sham, then mobilized to push back JFS. Free Syrian Army fighters and civilians have erected blockades in areas near Batabo and Atareb to prevent movement of JFS fighters, holding up a 1-km convoy in Idlib Province.

Fighting is reported in al-Halzoun in western Aleppo Province, with “multiple” rebel casualties, and near Khirbet al-Joz in Idlib Province, with JFS claiming the capture of several rebels. Nour ed-Din al-Zinki — formerly aligned with rebels but now sharing camps with JFS, including one bombed by the US last week — is supporting the JFS assault.

Late-night demonstrations have been held in towns throughout Idlib and Aleppo Provinces to denounce the JFS attacks.

Rebel sources said JFS moved much of its force surrounding the regime enclaves of al-Fu’ah and Kafraya in Idlib Province to launch the assaults. The jihadists reportedly cut off Internet access as it surrounded rebel buildings.

A Jaish al-Mujahideen commander appealed to rebels, “We won’t beg for your assistance, help us if you will… Better to die standing up rather than survive humiliated”.

THe Jaish al-Mujahideen statement that it will fight JFS, calling on others to join. 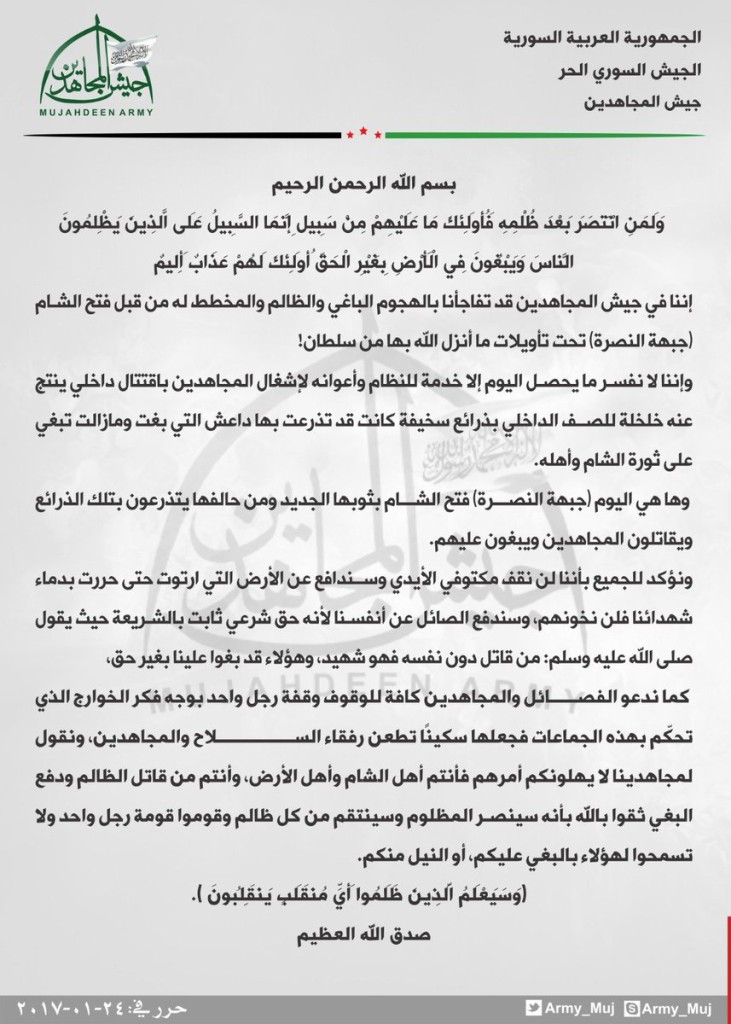 While Jabhat al-Nusra has fought alongside rebel factions in much of Syria since 2013, the relationship has been marked by political differences and occasional violent disputes.
In late 2014 the jihadists defeated the US-supported Syrian Revolutionary Forces and Harakat al-Hazm, pushing those groups into Turkey.

However, both SRF and Harakat were widely disliked by other rebel factions, who accused them of theft and war profiteering. Jaish al-Mujahideen is held in higher regard by the leading rebel groups.

When it formally broke with Al Qa’eda in July 2016 and renamed itself, Jabhat Fatah al-Sham said it was seeking unity in the fight against the Assad regime. But talks have failed to bring a political alignment, with discussions reportedly breaking down earlier this month.

Last weekend an immediate conflict appeared to have been avoided when JFS said it would not provide protection to fighters who were with the affiliated group Jund al-Aqsa, accused of attacking rebels in recent weeks.