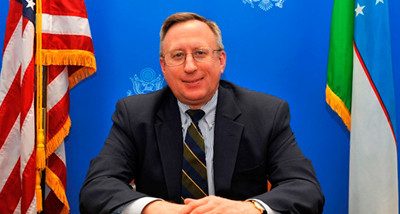 PHOTO: The US Ambassador to Kazakhstan, George Krol, will watch Syrian talks as an observers

Post-Surrender Regret in a Damascus Suburb

Sidelined by Russia and Turkey maneuvers and by Iranian objections, the US has accepted a marginal role in Monday’s political talks over Syria’s crisis.

The State Department said on Saturday that it will not send a delegation from Washington to the discussions in Kazakhstan, which include representatives of the Assad regime and the Syrian opposition and rebels.

Instead, the US Ambassador to Kazakhstan, George Krol, will attend as an observer.

State Department spokesman Mark Toner said the reasons for the low-level presence were the “Presidential inauguration and the immediate demands of the transition”.

However, the outcome appeared to be an American acceptance of its relegation from the center of the political process by Moscow and Ankara.

For more than three years, US Secretary of State John Kerry’s approach was co-operation with Russia, notably counterpart Sergei Lavrov. But this summer, as Russia and Turkey — on opposite sides of the conflict — reconciled, the two countries pursued their objectives without the Americans.

A deal was struck in which Turkey accepted the pro-Assad recapture — enabled by Russian air power imposing a siege and killing hundreds of civilians — of all of Aleppo city, while Moscow acceded to a Turkish-rebel offensive pushing back the Islamic State in Aleppo Province. A nominal ceasefire was declared on December 29. Although it was immediately broken by pro-Assad offensives near Damascus, Moscow and Ankara continued the pursuit of the Astana talks.

Russia and Turkey issued an invitation to Washington to attend, but Iran repeatedly objected last week, defying Moscow’s line even as
Lavrov said he hoped the incoming Trump Administration would send a Middle East expert to the talks.

Iran: No Rebels in A Political Transition

Iran drew another line on Saturday, asserting that no rebels can be part of the political transition.

Hossein Amir-Abdollahian, a special advisor to Speaker of Parliament Ali Larijani, said after a meeting with the Syrian Ambassador, “In any political solution to the yesterday terrorists must not become the today politicians.”

President Assad ruled out a transition of any kind in an interview broadcast on Friday, saying it was not necessary under the Constitution.

While Russia has reserved its position and Turkey has supported the transition, Tehran has said Assad’s future is a “red line” which cannot be crossed.

Amir-Abdollahian said on Saturday, “The Islamic Republic of Iran backs territorial integrity and independence of Syria and regards national dialogue and people’s vote as the best political solution to the Syrian crisis.”

Pro-Assad forces are firing mortars on the besieged town of Madaya, accoding to the White Helmets civil defense organization.

The volunteers said 13 shells have “wounded many civilians”, including a child.

Madaya is northwest of the Wadi Barada area, which has been under assault by Hezbollah and regime forces in violation of a December 29 ceasefire.

The town has been besieged since July 2015, with scores of people dying from starvation in the following months. Food and supplies remain very limited.

The US has killed another Jabhat Fatah al-Sham leader in its escalating campaign against the jihadists.

Abu Musab al-Jazrawi and another person were slain by a drone strike on its car in Aqraba in northern Idlib Province in northwest Syria.

Aftermath of the US drone airstrike targeting the leader within JFS Abu Musab Al-Jazrawi in Aqraba Northern Idlib near the Turkish border. pic.twitter.com/SaMD9PLmfh

In recent weeks, the US has focused its aerial campaign on JFS, targeting commanders and complexes. The Pentagon said on Friday that it has killed 150 “Al Qa’eda militants”, including more than 100 in a Thursday attack.