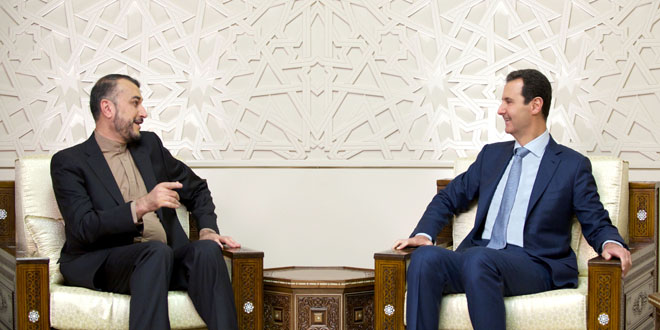 UPDATE 1300 GMT: Syrian State media is circulating a picture of President Assad meeting “business owners affected by war”, apparently trying to dispel claims that he has suffered a mini-stroke.

However, the photo appears to show the President supporting his left side by propping himself on his chair and video shows limited movement of his left arm.

A reliable source with knowledge of Assad reacts:

Notice how Bashar is sitting with a cushion between his back and chair? He never sits like that. He sits upright like his father.

In my opinion, this photo confirms that Bashar was ill.

Video of Assad greeting some of the visitors:

Syria’s President Assad was treated for a “mini-stroke” from a blood clot last week in a Beirut hospital and is now recuperating at home, according to reports.

A pro-opposition activist, who has been reliable in the past, cited “a highly knowledgeable source in the American University Hospital in Beirut”, where Assad was reportedly treated after initially being taken to a Damascus hospital. The source said the President was flown by helicopter from a Damascus hospital to AUH last Thursday and was released on Saturday, returning to the Presidential Palace.

The activist has also privately provided the name of Assad’s doctor for confirmation.

Source did say Bashar Assad was recovering well and was in no shape I'm a life threatening situation. Source said it was a stroke.

Rumors of Assad’s ill health have been circulating for days, provoking debate in Syrian and Lebanese media. Faisal Qasim, a prominent presenter on Al Jazeera Arabic, said earlier this week, “I assure you that Bashar al-Assad is bedridden.” He claimed Assad has limited movement and called on State TV to show him to deny the rumors.

The claims have been further propelled by a phone call from a pro-opposition reporter, posing as a regime official, to the Shami Hospital in Damascus, where Assad was initially taken. By issuing a “final demand” that hospital staff not reveal any information to the media, she elicited the acknowledgement that Assad had been admitted for treatment.

In an unusual move, the Syrian Presidency issued a statement on Friday to deny the reports. It has previously avoided any comment during Syria’s six-year conflict on rumors that Assad has been killed or injured, or is seriously ill.

An EA source inside Syria notes that the Presidency also issued an unusual denial in November 1983 that then-President Hafez al-Assad, Bashar’s father, suffered a heart attack — only for the news to be confirmed days later.

See Iran Daily, Jan 27: Tehran Sends Another Message to Syria’s Assad — But What is It?

Days after forcing the capitulation of the Wadi Barada area, northwest of Damascus, pro-Assad forces are trying to advance on the front northeast of the capital.

Both pro-regime and pro-opposition accounts report the attacks on the al-Madani, Hazrama, and al-Marj frontlines. A local pro-opposition source acknowledges “immense pressure from regime militias on all fronts”.

Rebel spokesmen claimed “tens” of casualties among the attackers, with more than 20 killed, and targeting of the area with chlorine by regime forces.