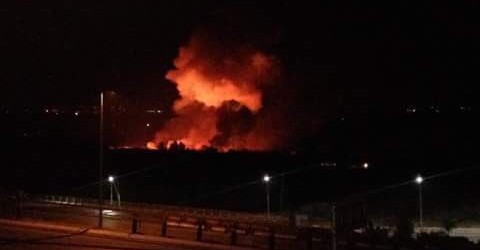 PHOTO: A column of smoke rises from the Mezzeh airbase in southern Damascus after a reported Israeli attack early Friday

The Assad regime says Israel has fired missiles on one of Syria’s most important airbases.

The Syrian Army’s command reported the attack early Friday on the Mezzeh base, used by the elite Republican Guards and located 5 km (3 miles) from the Presidential Palace. It said several missiles were fire from northern Israel near Lake Tiberias in northern Israel.

Residents saw a large plume of smoke rising from the area, and video showed flames in parts of the base. The army’s statement did not report casualties, but State TV said ambulances had rushed to the scene.

“Syrian army command and armed forces warn Israel of the repercussions of the flagrant attack and stresses its continued fight against terrorism and amputate the arms of the perpetrators,” the army said.

Following its standard procedure, the Israeli Defense Forces made no comment.

Israel has carried out airstrikes and missile attacks on warehouses and convoys during Syria’s six-year conflict, mainly to disrupt supply of missiles and other munitions to the Assad regime’s ally Hezbollah. The Israeli air force also killed Hezbollah commanders and troops when they believed the Lebanese organization was trying to establish firing positions in the Golan Heights near the occupied Israeli area, and they assassinated Hezbollah leader Samir Qantar in December 2015.

In early December, the Israeli forces reportedly fired two missiles on a base near Damascus.

For the first time, international investigators have listed President Assad and his brother Maher, the former commander of an elite Army unit, as suspects in the use of chemical weapons.

The joint inquiry for the UN and the Organisation for the Prohibition of Chemical Weapons named 15 people in connection with a series of chlorine bomb attacks in northwest Syria in 2014-15.

The list was based on a combination of UN-OPCW evidence compiled and information from Western and regional intelligence agencies, according to a source.

Virginia Gamba, the head of the Joint Investigative Mechanism, asserted that, despite the list, “There are no…identification of individuals being considered at this time,” she told Reuters by email.

The first section of the list, “Inner Circle President”, lists six people including President Assad and his brother, who commanded the elite 4th Armoured Division at the time of the attacks, the Defense Minister, and the head of military intelligence.

The second section names the air force chief and four commanders of air force divisions, including the heads of the units named by the inquiry over the chlorine attacks.

The third part of the list names two colonels and two major-generals.

After more than a week of negotiations, engineers have reportedly enter the Wadi Barada area, to fix essential water facilities damaged by a pro-Assad offensive.

An outlet linked to the Free Syrian Army tweeted about the breakthrough and posted pictures of the engineering convoy. 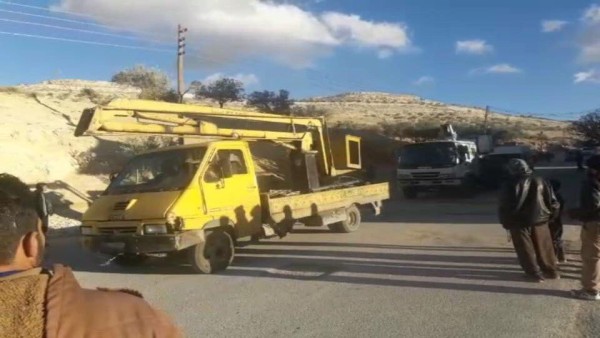 Defying the December 29 ceasefire, regime and Hezbollah forces have carried on attacks — bombing, shelling, and ground assaults — that began a week earlier.

The al-Fijeh springs in Wadi Barada provide more than 60% of Damascus’s water. Bomb damage to a pumping facility disrupted the flow, leaving more than 5 million people with no more than two hours’ supply each day.

On Thursday, Hezbollah finally advanced into Wadi Barada, taking 1/3 of the village of Bassima on the southern edge of the pocket.

The bomber detonated explosives near a group of soldiers outside the village of Ma’an.

The Turkish and Russian militaries have signed an agreement to coordinate air operations in Syria, officials from both countries said Thursday.

The deal was announced after meetings in Moscow to discuss attacks on “terrorist targets”.

The agreement is the latest stage in political and military cooperation following this summer’s reconciliation between Turkey and Russia.

The two countries struck a deal for a de facto partition in northern Syria, with Ankara accepting the reoccupation of all of Aleppo city by pro-Assad forces and Moscow acceding to Turkish military intervention alongside rebels against the Islamic State in Aleppo Province.

This has been followed by Turkish-Russian efforts to broker a ceasefire, with limited success because of ongoing pro-Assad offensives, and political talks later this month in Kazakhstan between the Assad regime and the Syrian opposition.