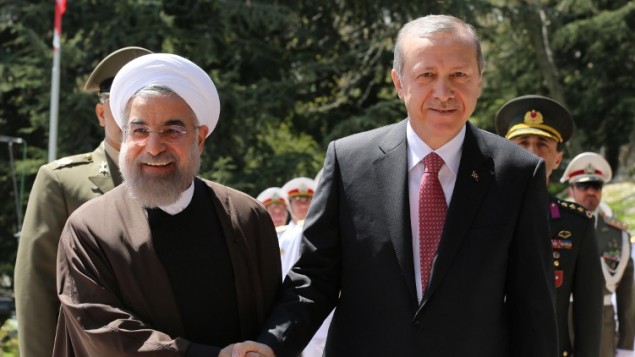 Iranian State media framed Thursday’s call as Rouhani’s emphasis on “the need for promotion of cooperation…to advance the long-term interests of the Middle East” and his assurance that “the Islamic Republic of Iran is content with closer cooperation among Ankara, Tehran and Moscow to bring about peace in the region”.

The reconciliation of Turkey, which had been a leading backer of Syrian rebels, with the Assad regime’s key ally Russia has posed questions for Iran even as the three countries began discussing political and military arrangements. Tehran says it is committed to President Assad remaining in power, but Russia has been less forthright and may accept a settlement which leaves the opposition and rebels in control of part of Syria.

Iran has also been wary of the Turkish-Russian efforts for a ceasefire and political talks. Iranian-led militias twice undermined the arrangements for removal of civilians and rebels from opposition districts of Aleppo city in December. An Iranian headquarters is reportedly assisting the pro-Assad offensive against Wadi Barada, northwest of Damascus, in violation of the ceasefire announced December 29 by Ankara and Moscow.

Iranian State media said Rouhani “expressed satisfaction” over the ceasefire, albeit without mentioning the ongoing pro-Assad attacks. He said of the proposed regime-opposition talks in Kazakhstan later this month, “We are all determined to fight all terrorist groups in the region. I hope relative stability prevails in Syria and the region through cooperation between Iran and Turkey.”

According to Iran’s Press TV, Erdoğan said, “Iran and Turkey shoulder a great responsibility in the region, so they should strengthen their mutual cooperation in a bid to ease regional tensions.”

Iranian-Swedish Doctor on Hunger Strike After 9 Months in Prison

In Iran’s latest case of a detained dual national or Iranian-born resident of another country, Dr Ahmadreza Jalali is on hunger strike after almost nine months in Tehran’s Evin Prison.

Jalali, born in Iran and resident in Sweden, is an expert in emergency disaster medicine. He stopped eating on December 25 when he was told he could face the death penalty.

The doctor was arrested by agents of the Intelligence Ministry on April 24, as he was visiting at the invitation of Tehran University. He has been charged with “collaborating with enemy states”.

“Ahmadreza had always traveled to Iran by invitation of state organizations, including the Red Crescent, and never experienced any problems before,” his wife Vida Mehran-nia said.

Mehran-nia said the family was initially silent “because we thought there had been some mistake or misunderstanding, and that he would be acquitted and released”. However, Jalali was denied access and held in solitary confinement, under interrogation, for seven months.