PHOTO: A regime bombing near the al-Fija springs in Wadi Barada in late December

Kerry — It’s All Britain’s Fault That We Didn’t Intervene
Analysis: The Crisis for International Aid

UPDATE 1845 GMT: A A senior rebel official denied a report from a Hezbollah outlet that a brief ceasefire had been reached between rebels and pro-Assad forces in Wadi Barada.

Hezbollah’s military news service said a truce had been reached for “a number of hours”, but Munir Sayal, head of the political wing of the Ahrar al-Sham faction, said the report was “a lie”.

Sayal asserted that on Thursday the regime rejected a ceasefire that would have allowed for repairs to the water pumping station and for people to return to two nearby villages.

UPDATE 1545 GMT: Rallies have been convened in opposition districts across Syria in support of the besieged and attacked Wadi Barada area.

A demonstration in Damascus Province: 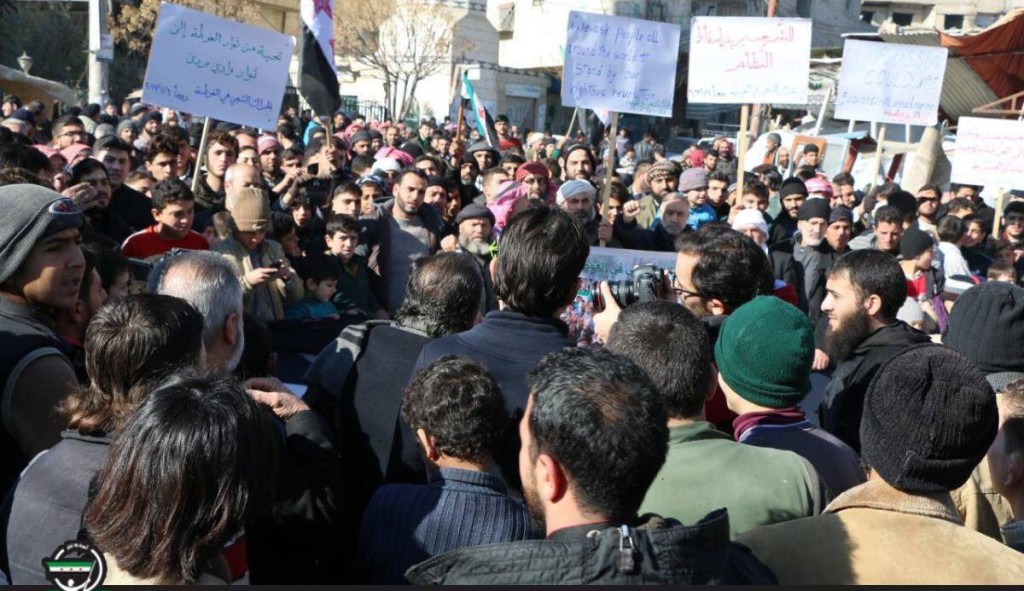 Referring to the cut-off of water in Damascus — “Assad thirsts you and kills us”: 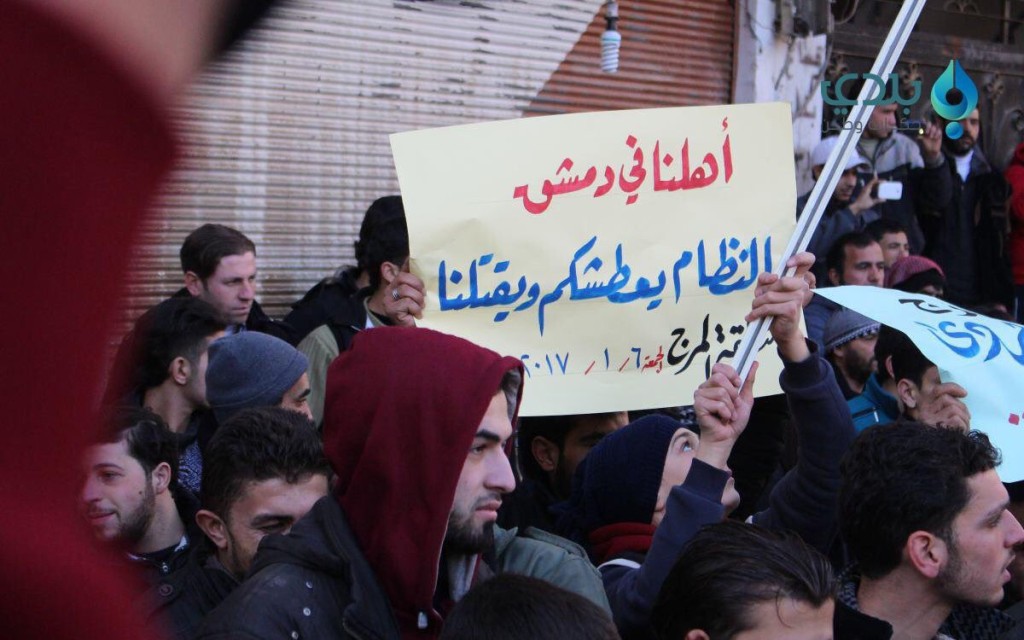 Ma’arat al-Num’an in Idlib Province — “No solution without the departure of Asaad”:

Residents and rebels reported an intensification of bombing and shelling in the past 48 hours, with “scores” of jets attacking three of the 10 villages and near the al-Fija springs, which provide more than 60% of Damascus’s water. A pro-Assad site, reporting the attacks, is also proclaiming the deployment of an elite brigade of the 4th Mechanized Division to the battlefront.

An outlet for the Free Syrian Army tweeted on Friday afternoon:

In late December, the Syrian Air Force’s attacks damaged the pumping station for the springs, sending water overflowing into roads. The resulting shortage in Damascus has meant that about 4 million people have no more than two hours’ supply each day, with the price of bottled water more than doubling.

On Thursday, the UN’s head of humanitarian operations in Syria, Jan Egeland, said, “To sabotage and deny water is of course a war crime.” He said 5.5 million people in Damascus have no or limited supply and warned civilians “will be affected by waterborne diseases”.

To cover up the damage and the cut-off of water, the Assad regime and its supporters spread the unsupported claim that rebels had “poisoned” the supply with diesel fuel.

Despite the ceasefire brokered by Turkey and Russia, the regime and Hezbollah have not stopped the airstrikes, shelling, and ground offensive. Pro-opposition activists also say an Iranian headquarters is involved in the siege and organization of the attacks.
Damascus and its allies are using the pretext that they are targeting the jihadists of Jabhat Fatah al-Nusra, whom the regime says is excluded from the truce.

However, JFS (formerly known as Jabhat al-Nusra) left Wadi Barada by late 2015, according to local sources, activists, the opposition, and rebels. There is no evidence of an organized return to the area, although individual members may remain: journalist Nour Samaha claims from a local source that a “small” number are present, and analyst Charles Lister says there are no more than 30.

A pro-Assad activist, often used as a channel for the regime’s thinking, effectively admitted the propaganda over JFS/Nusra this week but said that the attacks breaking the ceasefire will continue:

Regardless of whether #Nusra or mother Theresa is in wadi barada, #SyrianArmy has decided to take full control of the water stations.

Despite the intensity of the shelling and bombing, the pro-Assad forces have made limited if any gains since mid-December. Still, regime official Alaa Munir Ibrahim said on Thursday, “We hope in a few days water will return back to the capital after the army takes back Ain al Fija. The army is advancing and…we expect good news.”

The Wadi Barada area has about 45,000 civilians, according to the UN, but local civic groups say the number is close to 100,000.

Only about 1,200 families have left the area despite the ongoing assault.

Turkey has condemned the attacks and warned that they could derail political talks proposed between the Assad regime and opposition later this month in Kazakhstan. Russia, an essential ally for the regime, has offered no comment about the assault.

In the latest US air attack on the jihadists of Jabhat Fatah al-Sham, an American strike has reportedly killed three people, including an aide to JFS/Nusra leader Abu Mohammad al-Joulani.

In the past week, the US has killed two JFS commanders and a strike on a jihadist compound near Sarmada, also in Idlib Province. left at least 25 dead.