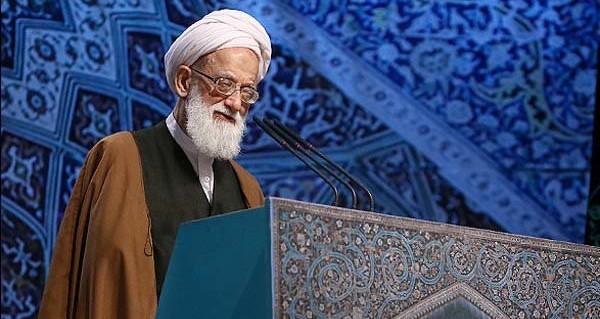 PHOTO: Tehran Friday Prayer Leader Kashani “The US was not supposed to do this”

Iran’s Friday Prayer leaders maintained the regime’s warnings over the renewal of US sanctions, saying this will violate the July 2015 nuclear deal.

Tehran has been agitated by the votes of the US Congress for a 10-year extension of the 1996 Iran Sanctions Act. President Obama has refused to endorse the measure, but has also declined to veto it, allowing the renewal to take effect.

The Act is not related to the nuclear agreement, and for now it is largely symbolic: Obama announced this week that he was maintaining waivers to its provisions. However, incoming President Donald Trump could suspend the waivers from Januaary.

The Iranian regime, including the Supreme Leader and President Rouhani, have criticized the extension and said Iran will retaliate. Earlier this week, Rouhani offered the first concrete response, ordering resumption of studies of nuclear propulsion, including for ships and submarines.

Yesterday Tehran’s Friday Prayer Leader, Ayatollah Mohammad Emami Kashani, insisted that the ISA’s extension broke the July 2015 deal, dismissing the White House’s announcement that there is no link: “They say that an extension is not a violation of the nuclear deal but it is, in fact, a violation of the Joint Comprehensive Plan of Action. The US was not supposed to do this.”

The Tabriz Friday Prayer Leader, Ayatollah Mohsen Mojtahed Shabestari, turned against Rouhani for “failing to sufficiently stand up to America’s violation of the nuclear deal”. He declared, “The restarting of our nuclear program should not be delayed by one day.”