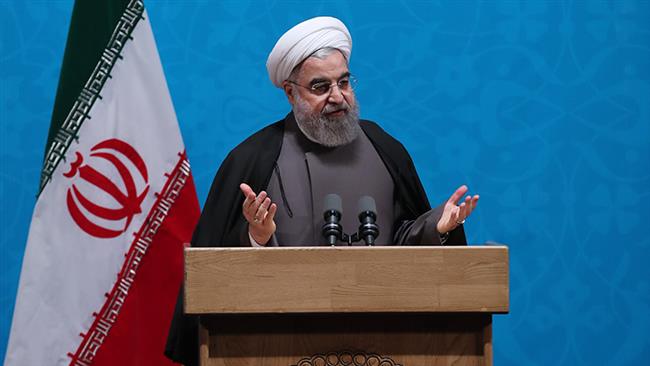 PHOTO: President Rouhani at Tehran University on Tuesday “Do you think Donald Trump can rip up the nuclear deal?”

President Rouhani has joined the Iranian regime’s warnings over a renewal of the Iran Sanctions Act by the US Government.

In a speech to Parliament on Monday,Rouhani said that Iran is “resolute” in implementing the July 2015 nuclear agreement. However, hge also said the Act’s renewal by the US Congress is a “violation” of the deal:

We will not tolerate the violation of the JCPOA [Joint Comprehensive Plan of Action] by any member of the 5+1 Powers. We will give a proportionate response [to any violation].

The US House of Representatives and Senate have each approved a 10-year extension to the 1996 Act. The measure now awaits President Obama’s signature.

Rouhani addressed Obama in his statement:

We believe that Congress’s latest legislation contradicts the JCPOA and is a violation of it. The President of America is therefore obligated to use his powers to prevent the approval and especially the implementation of [the Act].

If this legislation is implemented, it would be an egregious violation of the JCPOA, and it will be followed by a decisive response from us. We consider the president even signing this legislation to be counter to America’s commitments.

Implementing #ISA is blatant violation of #JCPOA to which we'll strongly react. Even if POTUS signs then waives it we'll respond accordingly

The Supreme Leader and senior officials have warned of the firm Iranian response. They have not specified actions, but they could include a renewal of research and development of advanced centrifuges, and even of production of 20% enriched uranium.

Rouhani said a committee overseeing implementation of the nuclear deal will review the status of the Iran Sanctions Act in a session this week.

“We Will Not Let Trump Rip Up Deal”

Rouhani followed up his Parliamentary statement with a message to President-elect Donald Trump on Tuesday.

The Iranian President said in a speech at Tehran University, broadcast live on State TV:

[Trump] wants to do many things, but none of his actions would affect us.

Do you think he can rip up the JCPOA? Do you think we and our nation will let him do that?

The Supreme Leader’s top aide, Ali Akbar Velayati, echoed in a Tehran press conference, “If [the Iran Sanctions Act] becomes definitive and the US President signs it, the Islamic Republic will definitely give a tough and appropriate response.”

Other regime figures such as Intelligence Minister Mahmoud Vaezi and former President Hashemi Rafsanjani made similar statements on Tuesday.