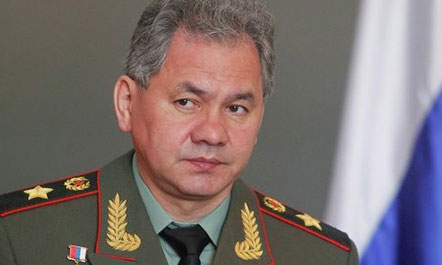 PHOTO: Russian Defense Minister Sergei Shoigu “To destroy terrorists in Syria it is necessary to act together”

Moscow just declared that it has notified anti-government rebels in besieged Eastern Aleppo to leave via two corridors between 9am and 7pm this Friday. And that this would extend the “ceasefire”, otherwise they would carry out their military targets.

I have checked with sources on the ground and as of yet there is no such notice and given the fact that there is no actual ceasefire and this is a total and utter lie by the Russians, this can only mean that when the deadline comes the bombardment of Aleppo will see an escalation. The reason this is significant now is that it comes just before the US elections which is expected to swarm mainstream and social media platforms. And could pretty much leave any activity in Aleppo, however horrific yet in the shadow of the elections that all will be focused on.

It is important that we take advantage of the the time we have now until Friday evening to shed as much light as possible on this strategy by the Russians, as when the time comes and if the plan is carried out; our voices will be weak in the midst of the world’s media focus.

The Russian Defence Ministry proclaimed that rebels would be allowed to exit the city unharmed and with their weapons between 0900 and 1900 local time via two special corridors.

Civilians and the sick and wounded would be allowed to leave via six other corridors, it said.

Zakaria Malahifji of the Fastaqim rebel faction responded, “This is completely out of the question. We will not give up the city of Aleppo to the Russians and we won’t surrender.”

We also demand separating supporters of Jabhat al-Nusra from the opposition, because we cannot consider terrorists together with the moderate opposition.

[But] we have dissenting views on how, on what basis they should be separated. First of all, it is necessary to stop the bombing raids, ensure the ceasefire and end the hostilities. After that, it is necessary to provide a reasonable period of time. As long as the war is going on, as long as the regime continues its bombing raids, it will be very difficult to separate them.

ORIGINAL ENTRY: Trying to regain the political initiative, Russia has declared that “peace talks” in Syria’s conflict have been delayed indefinitely.

Russian Defense Minister Sergei Shoigu said on Tuesday that the discussions were suspended because of the rebel offensive that began last week in Aleppo, seeking to break the Russian-regime siege of opposition areas of Syria’s largest city.

“The prospects for the start of a negotiation process and the return to peaceful life in Syria are postponed for an indefinite period,” he declared.

The Russian statement is more symbol than substance. The political process has been stalled since talks early this year, with President Assad refusing to accept a transitional government. In late September, the US halted its bilateral cooperation with Russia, following the renewal of the Russian-regime bombing campaign in Aleppo.

However, Russia is hoping to continue to shift pressure from itself and the Assad regime, accused of “war crimes” over the bombing, and onto rebels. Moscow declared a “humanitarian pause” on October 18, all but halting aerial operations over eastern Aleppo city.

Russia and the regime are hoping to promote the line that it is the rebels and not the siege causing suffering in opposition districts. Russian and Syrian State media are declaring that rebels are preventing civilians from leaving and firing on crossing points.

Moscow has also pressed the contention for months that rebels have not “separated” from the jihadists of Jabhat Fatah al-Sham (formerly Jabhat al-Nusra) in eastern Aleppo, even though JFS/Nusra have few fighters in the area. With the start of the rebel offensive, Russian officials have cast blame on the US for not pursuing the “separation”.

Shoigu argued on Tuesday in his televised speech:

It is time for our Western colleagues to determine who they are fighting against: terrorists or Russia.

Maybe they have forgotten at whose hands innocent people died in Belgium, in France, in Egypt and elsewhere….

In order to destroy terrorists in Syria it is necessary to act together, and not put a spanner in the works of partners. Because the rebels exploit that in their own interests.

There was little news again on Tuesday over the state of the rebel offensive, with the factions saying that they have imposed a media blackout.

Rebels made initial gains, notably the capture of most of the Dahiyat al-Assad suburb, and continued to shell the 3000 Housing complex. However, since Sunday there have been no reports of ground assaults into the housing area.

Rebels are hoping to break through the Russian-regime siege. Dahiyat al-Assad, the 3000 Housing complex, and the 1070 Housing area — over which rebels have near-total control — are to the north of the Ramouseh area where Moscow and pro-Assad forces re-imposed the siege in late August.

Video: Aftermath of Deadly Airstrikes on Saraqeb in Idlib Province

Footage of pro-Assad airstrikes on Saraqeb in Idlib Province today:

Initial reports say at least eight people were killed and more than 40 injured.

The opposition Syrian National Coalition has rebutted UN envoy Staffan de Mistura’s claims of “indiscriminiate” attacks by rebels in Aleppo that could amount to “war crimes”.

The delegation presented evidence to de Mistura that the rebels target only pro-Assad forces. Abdah denied allegations that the Free Syrian Army and other factions bombed schools, as he called for an investigation into attacks on vital civilian facilities.

The scene at the Atmeh displaced persons’ camp near the Turkish-Syrian border, after five days of rain:

Video show the situation in Camp of #Atmeh in the #Syrian/#Turkish border pic.twitter.com/nexCWlsbIe

Camps throughout northern Aleppo Province have been flooded, adding to the difficulties who have left their homes and are unable to get into Turkey.