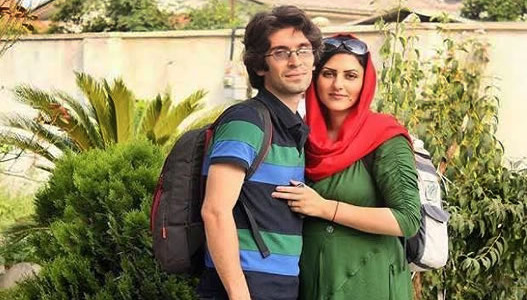 On October 24, Iranian intelligence authorities broke the apartment door of writer and human rights activist Golrokh Ebrahimi Iraee, raided her apartment, and took her by force to serve a six-year prison sentence for writing a story that was never published.

Ebrahimi Iraee, 35, is the wife of political prisoner Arash Sadeghi, 36, who is now serving a 19-year prison sentence. The family has suffered much mistreatment since the 2009 disputed Presidential election in Iran and have been in and out of prison. They have also lost their mother, who had a stroke the minute the authorities raided their home in 2009.

When the intelligence unit of the Revolutionary Guards came to arrest Ebrahimi Iraee’s husband, they raided their apartment – without a warrant – and found drafts of stories that she had written.

One of the confiscated drafts was a story about stoning women to death for adultery. The lead character watches a movie about the killing of women under Islamic law for the “crime”. Angered, she burns the Qur’an.

The story was never published or shown to anyone, Ebrahimi Iraee was convicted of “insulting religious sanctities” and “propaganda against the state” – effectively for using her imagination, according to Philip Luther of Amnesty International.

On October 4, Ebrahimi Iraee received a threatening phone call from a man introducing himself as the agent of the Centre for the Implementation of Prison Sentences, ordering her to go to the notorious Evin Prison to start serving her sentence.

Ebrahimi Iraee was never summoned to prison. By law, a phone call is not a legal order and prison authorities must send written notices announcing the start date of the sentence. Despite this, authorities took her by force and broke the door of her apartment.

Ebrahimi Iraee husband has also been mistreated. Arash Sadeghi, a student and human rights activist, was arrested numerous times since the 2009 disputed Presidential election. In the last court session in 2016, he was sentenced to a total of 19 years in prison.

Sadeghi also started serving his sentence without a legal summons. On June 7 when he visited Evin Prison to ask about the start date — to avoid the often-violent spectacle of seizing prisoners — he was taken inside by force.

“Arash did not want agents to storm our house to arrest him,” Ebrahimi Iraee, told the International Campaign for Human Rights in Iran on June 8. “He just wanted to know how much time we had to prepare for prison.”

In 2015, Sadeghi was sentenced to 15 years in prison for “assembly and conspiracy against national security”, “propaganda against the state”, “defamation of state in cyberspace”, and “insulting the founder of the Islamic Republic”. He is also serving a four-year prison sentence issued in 2010 for “assembly and conspiracy against national security” and “propaganda against the state”. The charges are for his participation in the nationwide protests against the 2009 Presidential elections.

Both Sadeghi’s and Ebrahimi Iraee’s sentences were upheld by the Appeals Court in December 2015.