UPDATE 1745 GMT: Graphic footage of a hospital under attack in earlier Aleppo city:

UPDATE 1515 GMT: The death toll in opposition-held Aleppo on Saturday is now 56, with more than 280 people injured by more than 370 regime airstrikes and shellings, according to pro-opposition journalist Hadi al-Abdallah.

UPDATE 1130 GMT: According to journalist Hadi al-Abdallah, the White Helmets civil defense organization has counted more than 2000 artillery attacks and 250 air raids from midnight through this morning.

The rescuers said 28 people have been killed and more than 150 injured.

The Health Directorate in opposition-held eastern Aleppo city has announced that all hospitals are now out of service.

ORIGINAL ENTRY: Russian and regime air forces again attacked medical facilities in Syria’s largest city Aleppo on Friday, as part of their renewed bombing to break the resistance of the population in opposition-controlled areas.

Since resuming airstrikes on Wednesday after a pause of almost a month, the Russian-regime assault has struck at least eight medical facilities and the main blood bank in eastern Aleppo city, where an estimated 270,000 people remain. The civil defense center in Bab al Nayrab was also targeted on Friday with 20 artillery shells, two air-to-ground rockets, and four barrel bombs.

The Local Coordination Committees documented the killing of 76 people in Aleppo on Friday, among 105 deaths across Syria. Among the fatalities were 23 children and eight women.

Mohamad Abboush, an east Aleppo resident, said he found one hospital in ruins and another in flames as he and relatives sought assistance after an attack which killed his uncle and 12-year-old cousin and wounded others.

The airstrike destroyed a four-story apartment block in the Tariq al-Bab neighborhood, he said. Survivors were taken to houses in another area, but nowhere was safe: “The whole of Aleppo is being bombed.”

Footage from one of the attacked hospitals:

A father carries his slain child: 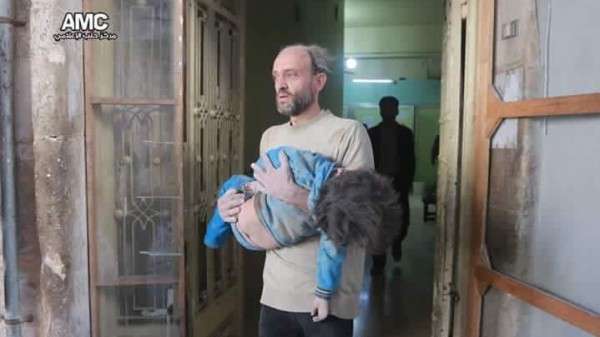 Meanwhile, fighting was reported on the southern and eastern edges of the area, including in the Sheikh Saeed district. Pro-Assad forces, including Hezbollah fighters, made initial gains in the Owaija area; however, they were soon pushed back by rebels.

Russia and the Assad regime re-imposed a siege on the opposition districts in late August, with the UN distributing its last food rations last week. Bombing between September 19 and October 18 killed more than 600 people.

Removing a child from rubble in Yaqed al-Adas in Aleppo Province:

Destruction of the Aleppo University Faculty of Education and Arts in Daret Izza:

Attacks Near Damascus and in Homs City

Pro-Assad forces also bombed and shelled Douma, one of the largest remaining opposition-held Damascus suburbs, on Friday. The LCC reported 18 deaths in the town and nearby Jisreen.

Regime forces have advanced in the East Ghouta area around Douma since the spring. They have besieged and bombarded the town, the base of the leading opposition faction Jaish al-Islam, since late 2012.

Attacks are also continuing on the al-Waer district of Homs city, despite the departure of several hundred rebels and their families in September.

Pro-Assad forces have now struck the area with mortars, tank shells, and sniper fire for more than a week, killing at least 10 residents and damaging the only remaining medical center serving the more than 50,000 residents.

“We just don’t have the materials to rebuild,” Dr. Ali Jamaa said.