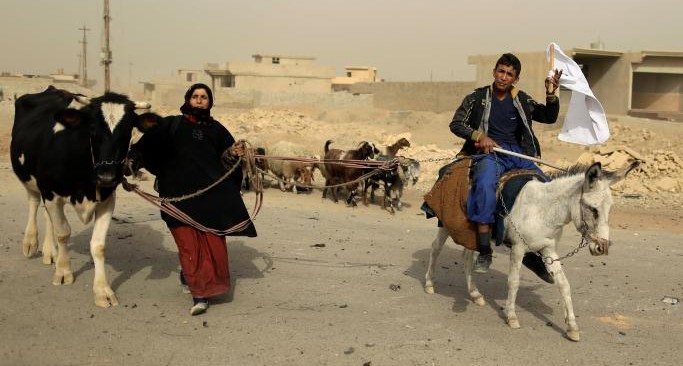 As artillery and airstrikes struck the city, street fighting was reported in the eastern neighborhood of al-Quds. The advance troops of the elite Counter-Terrorism Service claimed entry into the State television station.

“We are currently fighting battles on the eastern outskirts of Mosul,” CTS Lieutenant-General Abdul Wahab al-Saidi said. “The pressure is on all sides of the city to facilitate entry to the city center.”

Al-Saidi also claimed full control of Gogjali, about 7 km (4 miles) from the center of Mosul, although clashes are still reported on Wednesday morning.

Residents of the eastern neighborhoods said they heard the sounds of heavy clashes since dawn. A resident in al-Quds said bullets were hitting the walls of houses, amid “deafening and frightening” explosions.

However, Reuters reported that in other areas of Mosul, traffic was relatively normal, markets were open, and Islamic State fighters were patrolling as usual.

The Iraqi-Kurdish offensive is now in its third week, with Kurdish peshmerga reportedly as close as 5 km (3 miles) from Mosul. To the south, the Iraqi army and Federal Police about still about 30 km (19 miles) away.

PMU spokesmen said they had lost 15 fighters while killed about 30 ISIS troops.