Syria Interview: Assad — “This Conflict is About World War 3” 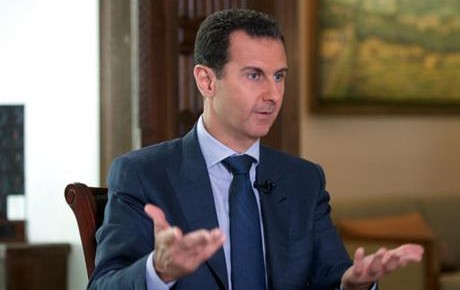 In an interview published on Friday, Syria’s President Assad is given an opportunity by Komosomolskaya Pravda — an outlet of his ally Russia — to declare that he wants complete victory over the opposition and rebels.

Assad also evaluates that the Syrian civil war is part of a US quest for control of the world.

Question 1: Thank you very much, Mr. President. It’s a big happiness for me, and I’m very proud. Okay, I will start from my questions. The situation in Syria become more dangerous and more unpredictable. Why? Because this conflict draws inside more participants and more players. For example, who do we have now in Syria in the war? Iran, Lebanon – I mean Hezbollah- Russia, Turkey, USA’s huge coalition, China shows interest. I mean, do you have any concerns that this conflict results in a third world war, or maybe it’s already beginning of third world war.

So it’s not about the number, it’s about the main issue that is terrorism. Second, it’s about World War Three. This term has been used recently a lot, especially after the recent escalation regarding the situation in Syria. I would say what we have now, what we’ve been seeing recently during the last few weeks and maybe few months is something like more than cold war, less than war, a full-blown war. I don’t know what to call it, but it’s not something that has existed recently, because I don’t think that the West and especially the United States has stopped their Cold War, even after the collapse of the Soviet Union.

You have many stages in that regard, and Syria is one of these important stages. You see more escalation than before, but the whole issue is about keeping the hegemony of the Americans around the world, not allowing anyone to be partner on the political or international arena, whether Russia or even their allies in the West. So this is the essence of this war that you described as third world war that exists, it is a world war, but it’s not military war. Part of it is military, part of it is terrorism and security, and the other part is political. So, you’re correct, but in a different way, not only about Syria; Syria is part of this war.

But you said…Syria became stage of this war. Why Syria? I mean, okay, you are big country, I mean, you have oil but not like Saudi Arabia. Why exactly Syria?

President Assad: It has many aspects. The first one, if you want to talk about the regional conflict, Syria has a good relations with Iran, and Saudi Arabia wanted to, let’s say, destroy Iran completely, maybe in the political sense and maybe in the material sense or factual sense, for different reasons. So they wanted Syria to go against Iran, that’s why destroying Syria could affect Iran negatively. That’s how I look at it.

The West, for them, Syria and Russia are allies for decades now, and again, if we undermine the position of Syria, we can influence the Russians negatively. But there’s something else; it’s about the historical role of Syria. Syria has played that role in the region for centuries, it was always the hub of the geopolitical dynamic in the Middle East. So, controlling Syria – since the Pharaohs, before the Christ, they used to fight for Syria, the Pharaohs and the Hittites, this is historical basis. So it has a role, geopolitics, the position on the Mediterranean, the society, because Syria is the fault line between the different cultures in this region; whatever happens in Syria will influence the region, negatively and positively, so controlling Syria is very important. Although Syria is small, it’s very important to control the rest of the region. Second, Syria is an independent country, and the West doesn’t accept any independent country, whether Syria as a small country, or Russia as a great power.

What’s their problem with Russia? Because you say “yes” and “no. You have to keep saying “yes”. That’s the problem with the West. So, that’s why Syria.

Some Western media found that the war in Syria now became a straight conflict between Russia and USA. You agree with this?

Yes, for a simple reason: when I said at the very beginning that the issue about the terrorism; Russia wanted to fight terrorism for different reasons, not only for Syria, not only for Russia, for the rest of the region, for Europe, for the rest of the world. They understand what the meaning of terrorism prevailing, in a certain way, while the United States have always, since Afghanistan in the early 1980s, until this day, they think, “Terrorism is a card we can play. We can put on the table.”

Now, we have a new player in this region. Okay, I mean, it was Turkish intervention, and nobody speaks about this now, like nothing happened. What’s your opinion about the role of Turkey in this war, and about this intervention?

If we start from today, it’s invasion.

This incursion is invasion, whether a small part, or large part of the Syrian territory; it’s invasion, against international law, against the morals, against the sovereignty of Syria. But what do the Turks want from this invasion regardless of the mask that they wear to cover their intention, real intentions. They wanted to whitewash their real intention that they used to support ISIS [Islamic State] and al-Nusra.