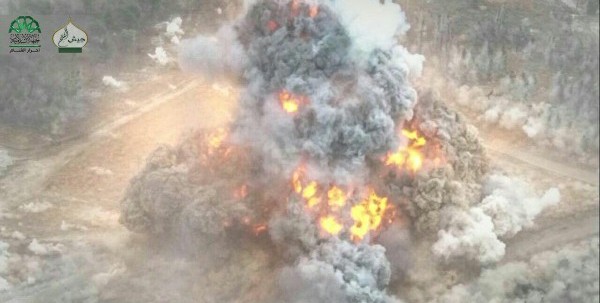 PHOTO: Rebel shelling of a regime-held TV-radio tower in first stage of an offensive west of Aleppo on Friday

UPDATE 1710 GMT: Rebels have secured almost all of the 1070 housing complex and have entered the neighboring 3000 housing project.

Rebels have held most of the 1070 complex, even when pro-Assad forces re-imposed the siege of Aleppo in late August, but have not been in the 3000 project until today.

UPDATE 1640 GMT: Vladimir Putin has ruled out immediate Russian bombing in response to the rebel offensive, according to the Kremlin.

Spokesman Dmitri Peskov told reporters, “You know about our General Staff statements about the need to resume airstrikes in Aleppo in connection with terrorist activities. The Russian president considers it inappropriate at the present time to resume airstrikes on Aleppo.”

Peskov said that “Russia reserves the right to use all means at its disposal” but that “the president believes it is possible to extend the humanitarian pause to evacuate the wounded and for militants who want to leave to exit the city, and to enable our US partners to fulfill their promise and commitment to separate the so-called moderate opposition from terrorist groups”.

UPDATE 1400 GMT: Iranian fighters are usually associated with pro-Assad forces, given the Islamic Republic’s essential support of the Assad regime since 2011.

However, these Iranian Arabs from Ahwaz are members of the Ajnad al_Sham rebel faction, fighting in west Aleppo:

One of the latest explosions is in the Hamdaniyah district: 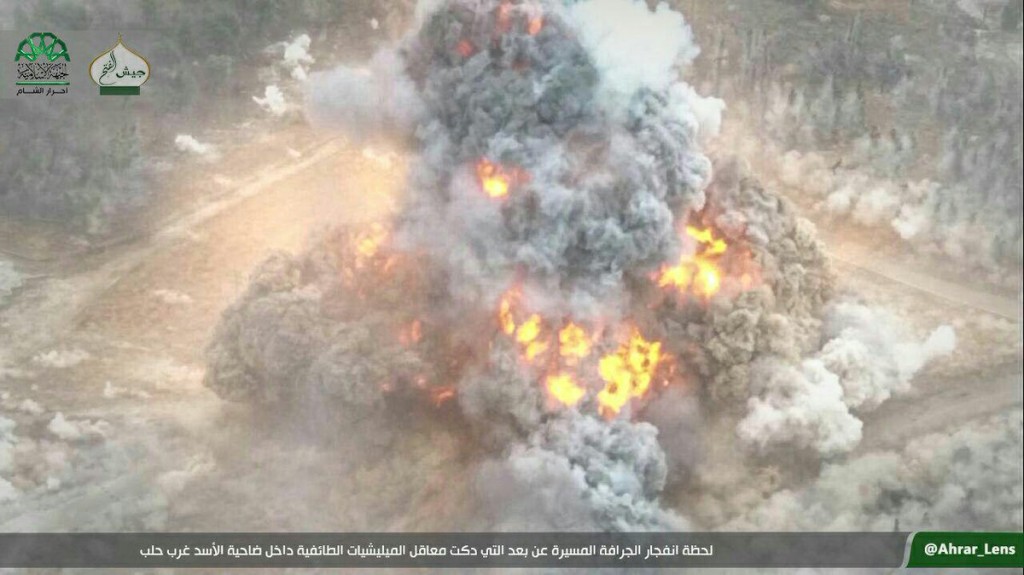 After capturing the Dahiyat al-Assad suburb, rebels may be seeking to take over the 3000 housing complex — an area which they did not hold even at the height of their summer offensive before a pro-Assad fightback took much of the front southwest of Aleppo.

UPDATE 1325 GMT: A pro-Assad blogger is confirming that rebels have captured the Dahiyat al-Assad suburb west of Aleppo.

Troops and armor of the Turkish-backed Faylaq al-Sham move towards the front:

Rebel factions had imposed a blackout over the area and objective of the offensive, but reports now indicate the Soura checkpoint has been captured. A cardboard factory and sawmills have been captured in the Minyan industrial district (see map), and rebels have moved into part of the Dahiyat al-Assad suburb (see map).

This morning residents in western Aleppo city reported hearing the loud explosion of a vehicle-borne explosive — activists say it was a remote-controlled bulldozer bomb.

Local sources laterr four vehicle bombs have been detonated so far. One was driven by a member of the jihadist faction Jund al-Aqsa.

Rebels made significant gains to the west and south of Aleppo both in the spring and summer, but pro-Assad forces — enabled by Russian airstrikes — hit back to recapture territory on the Ramouseh front southwest of the city. The takeover of an artillery base in late August re-imposed a siege on opposition areas.

Shelling of a regime-held radio tower: