Turkey Feature: US Insists “We Weren’t Behind Coup Attempt” 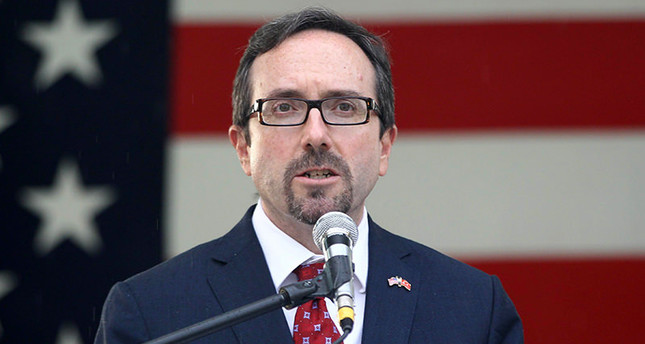 PHOTO: US Ambassador Bass — “US Government did not plan, direct, support or have any advance knowledge” of July 15 coup attempt

The US Ambassador to Turkey, John Bass, has issued another denial that Washington was behind the failed July 15 coup against President Recep Tayyip Erdoğan.

The US has repeatedly dismissed the claims of Turkish officials, including Erdoğan, that American operatives were behind the organization of self-exiled cleric Fethullah Gülen — accused by Ankara of orchestrating the coup attempt. The Chairman of the Joint Chief of Staff, Joseph Dunford, visited Turkey on Monday to restate the Obama Administration’s support for the Turkish Government and “democracy”.

However, Erdoğan and his officials have maintained the pressure. The Turkish President said on Tuesday, “Unfortunately, the West gives support to terror and stands on the side of coups.”

Erdoğan has demanded that the US hand over Gülen, who lives on a Pennsylvania farm, but Obama has maintained the American line that evidence be produced before any extradition request is considered.

“Deeply Disturbed and Offended by Accusations”

I just want to say again — as I’ve said before and as we’ve said from Washington — the United States Government did not plan, direct, support or have any advance knowledge of any of the illegal activities that occurred the night of July 15 and into July 16. Full stop.

Frankly, if we would have had knowledge we would have told the Turkish Government about it immediately, just as we bring to the attention of this government information about threats that it or its citizens face from terrorist organizations operating in Turkey.

Bass maintained that the US “wants to see a strong, prosperous, democratic, confident Turkey” working with Washington to deal with regional challenges: “Anyone who thinks that the United States somehow profits from Turkey being divided and destabilized I think is misreading history to a profound degree.”

The Ambassador said he first learned of the coup attempt when he saw the jet fighters of the anti-Government forces above Ankara:

People make assumptions that there was perfect knowledge, when in fact many of us were operating in a fact vacuum where we were struggling to understand what was going on, particularly at a point in time when operations were being conducted against the Turkish National Police Academy…and the parliament more or less simultaneously.

Sitting in the embassy, we felt the explosions at parliament. Our building shook.

Bass carefully handled questions about Gülen and the coup. He said that the testimony of Turkish Chief of General Staff General Hulusi Akar, which pointed to the cleric’s role, was “very powerful”. However, “beyond that, I don’t want to offer any views because…I don’t want to say anything that potentially makes it harder for the Turkish Government to pursue justice for those who are responsible.”

The Ambassador implicitly accepted the Government’s detention or suspension of more than 60,000 State employees, framing the issue as one of cooperation over counter-terrorism: “We respect that and continue to work together to address this terrible set of threats we both face.”