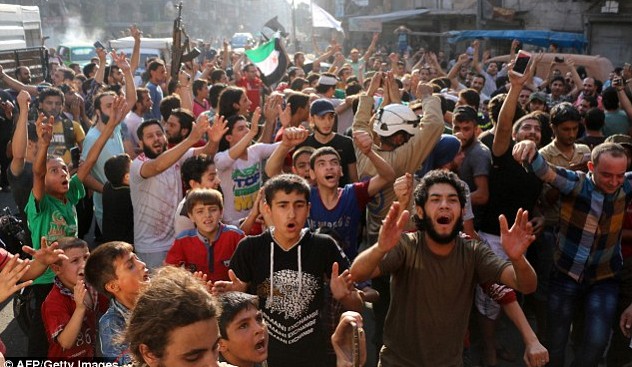 In June 2011, the last time I was in Aleppo, I visited my grandmother’s home every day. I obsessively photographed the apartment where my father grew up and where I spent much of my youth. I snapped shots of her wooden doors and balcony, our family’s antiques arranged in the glass vitrine, her organized kitchen cabinets and my grandfather’s proud portrait in the dining room. I took only a few sentimental pieces with me when I left to go back to my home in America. I wish I had taken everything.

My grandmother’s apartment is on a tiny street tucked between parallel one-way boulevards, one traveling southeast toward the heart of old Aleppo, and the other running northwest to the city’s expansive outlying neighborhoods. This diverse part of the city, in the west, has largely avoided the destruction of the war swirling around it — so far.

Aleppo, where I spent my adolescent years, where I went to college and became an adult before returning to the United States, where I was born, has been split in two since 2012. The west side is in the clutches of the government, and the east is held by rebel forces. Over the last four years, brutal territorial battles tore through the city, dividing neighborhoods that had been interwoven for centuries. Some two million people (including thousands of displaced Syrians) live in relative safety in the west, while over 250,000 live in the east, which has been subjected to years of indiscriminate aerial bombardment by the government’s barrel bombs and, since last year, Russian airstrikes.

Aleppo is the last major city where the rebels control significant territory, and President Bashar al-Assad thinks that capturing it could bring him close to so-called victory. In July, his forces tightened the noose around eastern Aleppo to wage yet another brutal “kneel or starve” campaign. Supplies of food and medicine were choked off; hundreds of civilians died.

At the beginning of August, the power struggle on the ground shifted unexpectedly. Activists set thousands of tires alight, creating huge clouds of black smoke, a weak attempt at a homemade no-fly zone to hide the east side from Russian airplanes. The rebel groups forged a fragile coalition and joined forces with the Levant Conquest Front, an Islamist group that recently was called the Nusra Front and was previously Al Qaeda’s affiliate in Syria. Together, they battled Mr. Assad’s troops and their Hezbollah militia allies. On Aug. 6, they broke the siege. Trucks from nearby Idlib brought the trapped civilians fresh food for the first time in weeks. Meanwhile, Russian jets struck nearby towns with incendiary bombs in retaliation. The bodies of fighters piled up in trucks like dead cattle.

As the battle unfolded, analysts on social media discussed events in real time with a zeal that comes only with detachment. Some said this battle would (again) tip the scales of the war. Others claimed that the rebels’ victory meant the bloody end was (again) near.

A favorite tool of the dispassionate Syria analyst is a map: red and green blobs showing a shifting front line, which streets are held by rebels and which by the government. These wretched maps rudely superimpose their lines over the landmarks of my life: On the east are the people I grew to love through the revolution, men, women and children who defied all odds and stood chanting in the face of one of the most ruthless regimes in history. On the west are my streets, my school, my university, my home.

I study these maps and calculate how far my home sits from the moving front line. As my neighborhood shifts sides from west to east, from red to green, will it be the next target of Mr. Assad’s barrel bombs? Or will it be left to the mercy of the rebels, who promised not to loot or destroy private property or kill civilians? Why should my home be spared when millions of others’ weren’t? This is what it feels like to watch your city rip itself apart: a constant oscillation between guilt and relief, fear and pride.