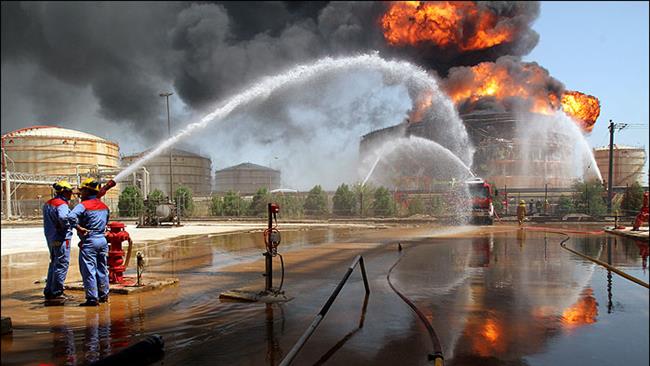 PHOTO: Iranian firefighters at a blaze at the Bu Ali Sina petrochemical complex in Mahshahr, July 8

Changing its position, Iran’s regime is acknowledging sabotage as a possibility in a series of fires in oil and gas facilities.

At least four blazes have affected the energy sector in recent weeks — three at petrochemical and oil installations and one in a 42-inch gas pipeline.

Iranian officials initially claimed that the fires were caused by accidents. However, on Saturday, Iran’s agency for cyberspace security said it was looking into sabotage by the US or Israel.

Another fire broke out at the Bistoon petrochemical plant in western Iran after a fault at the facility’s power transmission system, followed by blazes at Iran’s largest oil refinery in Abadan and a gas transmission line in Shiraz Province which killed one person.

The Secretary of the Supreme National Cyberspace Council, Abolhasan Firoozabadi, said, “Special teams will be sent to the afflicted sites to study the possibility of cybersystems having a role in the recent fires.”

In the past, the US and Israel have targeted Iran’s nuclear program with a series of cyber-attacks. The most prominent of these was the Stuxnet virus, revealed in 2010, which attacked German-made logic controllers at an uranium enrichment facility.

Iran also claimed a cyber-attack in April 2012 with the detection inside control systems on Kharg Island, which handles the most of the Islamic Republic’s exports of crude oil.