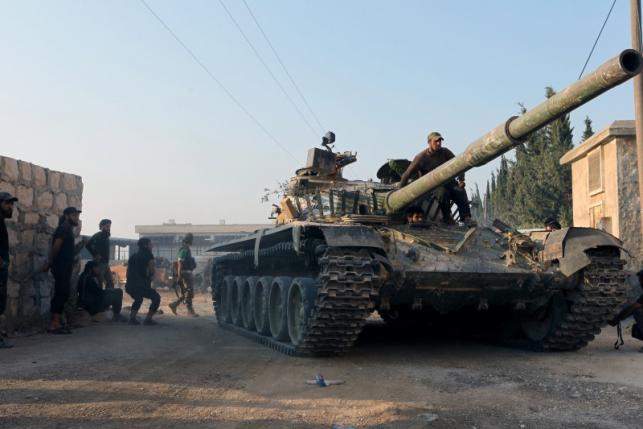 PHOTO: Rebels inside the captured regime artillery base southwest of Aleppo on Friday (Ammar Abdullah/Reuters)

UPDATE 1630 GMT: Artur Rosinski‘s map of the current situation on the southwestern Aleppo front, following the rebel breaking of the pro-Assad siege: 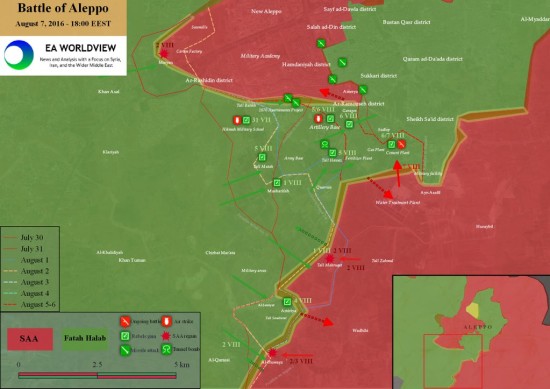 ORIGINAL ENTRY: Rebels have broken the pro-Assad siege of Aleppo and are now threatening the regime’s own position in Syria’s largest city.

On the eighth day of their offensive southwest of Aleppo, rebels completed the takeover of the Syrian military’s artillery base — one of the largest in the country — which they had entered on Thursday after days of shelling.

The rebel bloc Jaish al-Fatah quelled resistance in the northern part of the base, despite Russian bombing and the reported attempt of Iran and Hezbollah to shore up the crumbling Assad military. The rebels seized four warehouses full of ammunition and weapons, as well as capturing dozens of tanks and BMP armored vehicles.

The rebels pressed their advantage, completing their takeover with the capture of the air force technical college. Last night they closed on a cement factory, where a concentrated pro-Assad force is reportedly gathered, and a fertilizer plant. Meanwhile, inside the nearby town of Ramouseh, other rebels broke the initial line of regime defense.

By late afternoon, the offensive had achieved its initial goal of breaking the pro-Assad siege, as the rebels on the southwestern front met those who have been inside Aleppo city. The two forces then worked to expand the corridor, seeking to assure security of movement for personnel and supplies — by the end of Friday, they had reportedly opened up a 2 km (1.25 mile) wide passage.

The moment that rebels from outside and inside Aleppo city made contact:

The siege had been imposed on July 7 when the Syrian military and its foreign allies, enabled by Russian airstrikes, established fire control over the al-Castello road north of Aleppo. With the effective cut-off, residents in opposition areas of the city — estimated to be between 250,000 and 400,000 soon faced shortages of food and basic supplies.

While the UN expressed concern, there was little prospect that diplomatic action would provide any aid. Instead, Russia and the Assad regime tried to seize a propaganda advantage with the declaration of “humanitarian corridors” — none of which actually existed, according to residents and activists — for civilians and surrendering rebels to move to regime-held parts of Aleppo. Even as the rebels advanced on the southwestern front, Moscow was concentrating of declarations of seven “corridors” and speaking with US Secretary of State John Kerry.

The rebel achievement on Friday effectively swept aside that Russia-regime initiative. So far there is no indication from Moscow or Damascus of their next steps.

Regime amphibious armored vehicles seized from the artillery base: 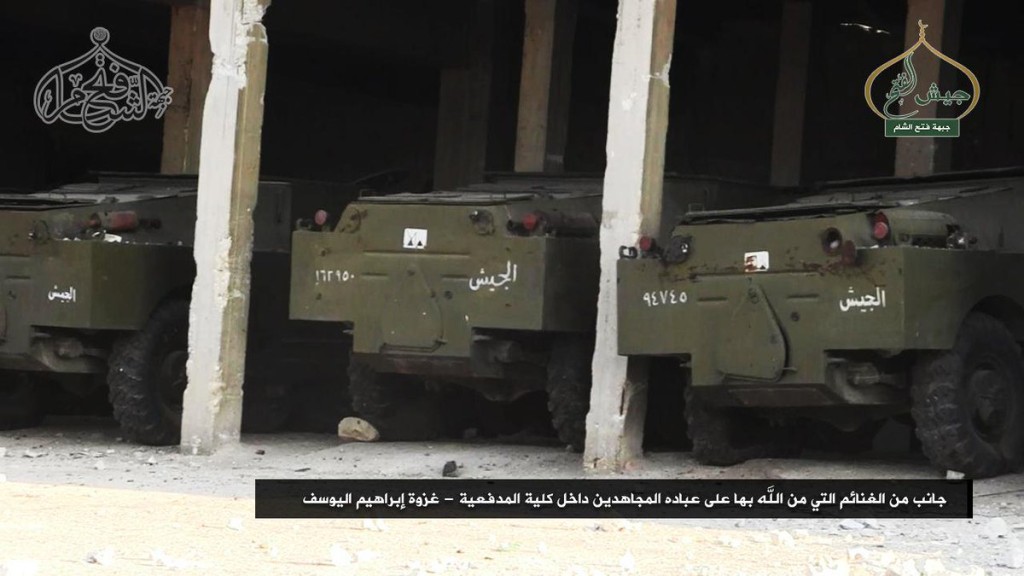 Residents celebrate in an opposition-held district of Aleppo:

Pressure on the Assad Regime

With their rapid advance — Jaish al-Fatah said it anticipated at least a month to break the siege — rebels could now turn the situation by cutting off the Syrian military and militia in and near Aleppo.

During their assault on the artillery base and the town of Ramouseh, rebels established fire control over the nearby southern ring road, preventing movement of regime personnel and equipment. On Friday, they began moving along the road both to the east and west to extend the cut-off.

The Syrian military and its foreign allies must now use a long route along the western district of Aleppo, moving around the city to the north, to reach major bases such as Safira on the other side.

As they considered pressure on regime forces inside Aleppo city, rebels put out a statement of assurance to civilians. The Free Syrian Army and Fatah Halab operations room said residents would be protected in homes, mosques, and churches. They added that regime troops would be assured of their security if they put down their weapons.

Rebels secure a portion of the Ramouseh supply road:

Free Syrian commanders to people of Aleppo — “We Are United”:

Russian State outlet RT has tried to play down the rebel success with the headline “Jihadists in Aleppo Claim Siege Breach, But Suffer Heavy Losses & Setbacks According to Syrian Govt”.

RT refuses to admit the loss of the artillery base and other rebel victories, citing Syrian State news agency SANA:

The Syrian air force, [SANA] specifically noted, was instrumental in isolating “with fire control the operations area in the surroundings of the military academies” to support the army’s push for “clearing the posts the terrorist groups earlier infiltrated”. The air support was also crucial in curbing the terrorist groups’ push onto southwestern Aleppo.

However, RT’s effort is somewhat undone by its dramatic presentation of the battles through videos which show the rebel advance.

The Assad regime’s SANA, citing a “military source”, maintains that the army is “courageously confronting the terrorist groups and engaging in fierce battles in a number of posts into which the terrorists infiltrated in the area of the military academies”.

The source insisted that “heavy losses are being inflicted upon the terrorist groups in the arms and personnel”. He denied that rebels had broken the siege, saying that this was a deception in “a wide psychological war through broadcasting tens of fabricated photos and videos to affect the morale of the citizens and mislead the public opinion and to cover the large numbers of the killed and injured terrorists in Saturday’s battles”.

However, the denials were undermined by the evidence provided by rebels and their supporters — in one case, they juxtaposed images from the Ramouseh Roundabout, captured by Jaish al-Fatah on Saturday afternoon:

A regime soldier was more honest in a message to a pro-Assad activist. He acknowledged the withdrawal from the base and said, “[The Syrian Army] declares the areas occupied by the sons of bitches as burnt land.”

Footage from a rebel drone of the Ramouseh area:

Unsurprisingly, Russia has responded on Sunday with airstrikes on the territory taken by rebels across southwest Aleppo.

The Russians are also bombing in Idlib Province, including the area near Saraqeb where five personnel were killed when their helicopter was shot down last week. Moscow has been unable to get the bodies back from a rebel faction, who want an exchange for detainees.

Regime sent threatening messages to residents of Saraqib & called on them to hand over the bodies of Russian pilots pic.twitter.com/YMmd0h5bE5

Russian warplanes have been attacking Saraqeb since the downing of the helicopter, causing dozens of casualties:

Saraqib, Syria, now. After 3 days of continuous air attacks by Russian planes. This is terrorism too. v @iyask1983 pic.twitter.com/SyqCtDbaKj

Vacuum bombs draw oxygen from the surrounding air to generate an intense, high-temperature explosion, of a significantly longer duration than a conventional explosive.

The blast and resulting fires destroyed the hospital’s pharmaceutical warehouse, vital medical equipment, and a fuel depot while causing significant structural damage to the building.

Battles Near Town of Kinsibba in Latakia Province

Pro-Assad forces are continuing days of attacks trying to recapture the mountain town of Kinsibba in northeastern Latakia Province.

Pro-regime activists claim that the Syrian military has moved into the Shillif Citadel near the town, but rebels say that they continue to repel the attacks in the al-Akrad mountains.

Control of Kinsibba offers the possibility of an offensive into neighboring, opposition-held Idlib Province. The town has changed hands on several occasions, most recently at the start of July when rebels re-occupied the area.