US Opinion: Why We Must Recognize Black Lives Matter 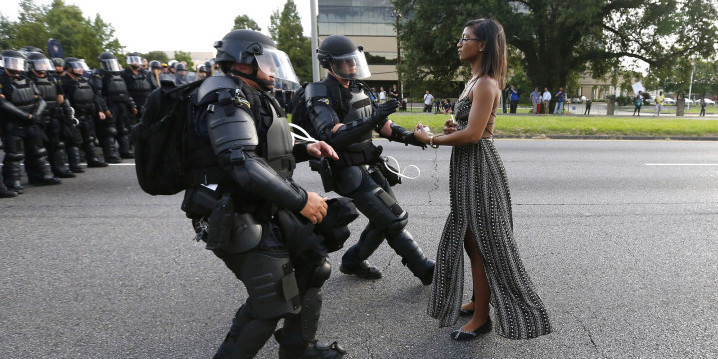 Last week a sniper killed five police officers and wounding six others in Dallas, Texas, during a demonstration over more deaths of African American men in police shootings.

Karina B. Heart writes about the necessity of dealing with the political, economic, and social issues — including the fundamental of racism:

I haven’t spoken to the terrible violence of these last days because, frankly, I’m at a loss….

My children are “bi-racial” but to white America, they are Black. Raised without their father or his family in their lives, it’s been on me, a white lady who hasn’t the lived experience of being Black, to teach them what it means to be black in this country.

Today, I had to try to explain to my son why the flags are at half-mast for 5 human deaths in Texas when after 9 human deaths at a church in Charleston last year, the whole South went crazy about the right to fly the rebel flag on government buildings. I heard myself say the words, “Because we live in a world where people say “all lives matter” but the truth is that some lives are valued much more than others. All lives will matter when all lives are equally valued, respected, loved and mourned.”

Then, we reviewed, for the millionth time, what to do if approached by a police officer.

My white friends, my white siblings, my white nieces, and nephews teach their children to respect the police, to trust them, to go to them when they’re lost, to call them when there’s trouble. They are taught the police are there to protect them and keep them safe.
I have taught my children the police will hurt them and possibly kill them because racism has taught the police (and white America) to see black skin and assume *without even being conscious of it* criminality and violence.

I didn’t teach my kids this to scare them or teach them they’re victims or as some kind of “reverse-racism.” I taught them because This. Is. The. Way. Things. ARE. This is the reality they must contend with. This isn’t “new.” It hasn’t gotten “worse.” The truth is, it never got better!

We (white people) somehow thought racism ended with the Civil Rights Movement, the Black Vote and anti-discrimination measures. We thought because we watched Bill Cosby and Arsenio Hall and loved Prince and Earth, Wind and Fire that we had overcome racism. We, liberal progressives in the Northeast read all the books and learned all the right ways to think about race…but somehow still didn’t live in neighborhoods with significant black populations, didn’t send our kids to schools in black neighborhoods. Racism was over, outdated and out of fashion. Yet, we lived it every single day.

Let me say this out loud. I married a black man. I was prepared to be disowned by my racist parents for loving that man. I have two black children. I *still* benefit from white privilege and I *still* discover layers of my own racism that were invisible until the moment of discovery.

Now, if *I* can uncover racism within myself, I encourage every white person I know to dig deeper than you currently are to find where your racism lives. Because, it’s in there. If we know each other well, I see it every time these discussions come up. If we are in (white) pagan community together–it’s in there or we wouldn’t be an overwhelmingly white community!

I won’t use shame to try to educate people. It doesn’t work. I won’t tell other people how to behave because adults are not children. But I am willing to sit down and have a real discussion (not one where you are continually on the defensive or minimizing). I’m willing to sit down and take this apart with you one on one. I’m willing to help you see what I see. Because if we don’t all take our blinders off, things are not going to get better any time soon.

As my son and I discussed the murder of Philando Castille during a stop for a broken tail-light, my son said, “Mom. You’re head-light’s been out on your car for months and months!”

“Because you drive a nice little red Prius?”

The teachers at my son’s schools in the North, made assumptions about him. They treated him with suspicion. They punished him for infractions so minor it made my head spin. It was a steep learning curve for me. I’d ask my (white, liberal, progressive, yankee) friends and family, “Do you think this is racism?” And they’d say, “No! Do you think so! I don’t think so! No! Do you think? No!”
I’d ask my black friends and they’d say, “Yes. It certainly is racism. It surely is. Absolutely.”

I have to go with the certainty of people whose lives are framed by racism over the incredulity of those who can’t imagine “good, educated, northern, liberal, progressive, tolerant white people” could be acting toward my son from an unconscious racist worldview.
Here in the South, his teachers have gone out of their way to swoon and compliment me, exclaiming with overly sweet tones, “How polite he is! He’s so well spoken! He’s so well mannered.”

This, too, has made my head spin. It took a few times (because, I’m white, remember?) to put it together–because, of *course* he’s polite and well-spoken but no more so than any other kid. Then, oh. He’s not any other (white) kid.

The unspoken ending to that praise is, “for a black boy”.

Part of me feels I’ve no right to speak to this at all. I’m talking about two children raised by a white Mom in white neighborhoods at white schools in the whitest, most progressive, most liberal region in the whole white, progressive, liberal northeast. I haven’t a clue what it’s like to know that not only my two children, but my father, brothers, uncles, cousins, grandfather, nephews, husband, nieces, sisters, mother, aunties, family friends, teachers, grocers and the college-bound kids of neighbors are *all* in danger *all* the time.

I watch the ease and self-assuredness with which my son walks through the world, oblivious to this danger, not believing it’s really real because he hasn’t lived it, wasn’t told the stories by his father and male relatives. He misbelieves (as my eldest once did) that he is safe in the world. He’s lived the privileged life that having a white mother brings. But the day is coming when he’ll no longer look like a kid, when I won’t be with him to buffer and absorb the fear and hatred. And, I think it’s going to genuinely shock him. And I’m scared to death for him.

This is far from over.

Black Lives Matter is about more than the extrajudicial killing of black men in the streets of America by white men in uniforms. It’s about infant mortality rates, maternal death rates. It’s about the poisoned water in Flint and the precinct-wide police rape of black girls in Oakland. It’s about the segregated North and the rebel-flag waving South. It’s about a President blocked at every turn from doing his job. It’s about black kids getting full scholarships to college and being told, “Oh. It’s because you’re Black”, instead of “It’s because you’re brilliant.” It’s about glass ceilings and the school-to-prison pipeline. It’s about the privatization of the jail-system walking hand in hand with hard sentences for minor crimes. It’s the New Jim Crow and the Old Boy Networks. It’s the Blue Line and the Red Line. It’s about the legal enslavement of incarcerated black men. It’s about lead poisoning in Baltimore. It’s about the stereotype of the black “Welfare Queen.” It’s about the fetishization of black bodies from the days of slavery right through the present day. It’s about a projection of everything base, ugly, ignorant, fearful and shameful upon those black bodies. It’s about the truth that when we lost the outside enemy at the end of the Cold War, we turned all that fear against one another. It’s about white people refusing to listen to the truth of LIVED EXPERIENCE — and gaslighting the narratives of black voices–deeming those experiences false or crazy; calling it a cult of victimization; accusing people of color of “pulling the race card”.

It’s about systems of hierarchy which value some lives as more worthy — of education, safe housing, employment, pre-natal care, respect, advancement, liberty, election, authority, health care, safety, protection, love, honor, admiration and grief–than others.
When Black Lives Matter and Brown Lives Matter, and Native Lives matter and Homosexual Lives Matter and Transgender Lives Matter and Women’s Lives Matter and Muslim Lives Matter as much as white, male, heterosexual lives — then, I will listen to you when you say, “All Lives Matter.” Then, All people will gather together across all lands and we’ll celebrate that we have finally overcome the desire to dominate and the proclivity to hate. I hope I live long enough to take part in that celebration.

We have a long, long way to go. But, it can go rather quickly if we are willing — like the alcoholic seeking recovery — to ADMIT we have a problem with racism and that our lives have become utterly unmanageable. That we don’t know what to do. That we need help. That there are those who DO know what to do and that we must listen to them and let them take the lead (hint: they are not our white “leaders” or the white media. Listen to Black Voices but don’t ask Black People to teach you how not to be racist or to absolve you of your racism). That we need to take a fearless and searching moral inventory and admit to ourselves how insidious our insanity has become. We need to become ready to have this defect in our character removed. We need to make a list of those who we’ve harmed with our racism — and to make heartfelt amends. As a result, we will arrive at a spiritual awakening and a way of being in the world and with ALL its people we can scarce dare imagine from where we stand.

We have a problem.

Each and every single one of us is responsible for fixing it because we cannot continue down the road we’re on.