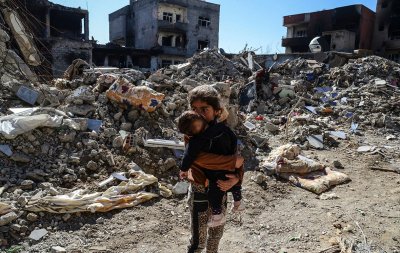 PHOTO: A girl carries an infant in Cizre in southeastern Turkey, May 2016 (Ilyas Akengin/AFP)

The Turkish Government is blocking access for independent investigations into alleged mass abuses of civilians, including killings and displacements, according to Human Rights Watch.

Monday’s report said Turkish authorities have imposed imposed blanket, round-the-clock curfews on 22 towns and cities in mainly-Kurdish areas of the southeast. The restrictions also prevent non-governmental organizations, journalists, and lawyers from investigating those operations or any alleged abuses by security forces or armed groups.

Most of the deaths, destruction, and mass displacement have occurred in nine towns, including Cizre. More than 355,000 people have temporarily left their homes within towns, to other nearby towns and villages, or to other regions of Turkey. At least 338 civilians have been killed amid clashes between security forces and the Turkish Kurdish insurgency PKK.

Human Rights Watch reviewed lists from Cizre-based lawyers which show that up to 66 residents, including 11 children, were killed by gunfire or mortar explosions during security operations between December 14, 2015 and February 11, 2016. Some witnesses and victims said that security forces opened fire on civilians on the streets carrying white flags.

The information indicates that, in February, security forces surrounded three buildings and deliberately and unjustifiably killed about 130 people –– among whom were unarmed civilians and injured combatants –– trapped in the basements.

While most residents died in neighborhoods where the PKK had erected barricades and dug trenches; however, some civilians were killed in areas where there were no clashes or barricades.

In April, the police blocked Human Rights Watch from interviewing families of victims and witnesses to the deaths.

Before the ban, HRW was able to document in detail eight civilian casualties in Cizre. Researchers spoke to victims and witnesses, lawyers, and NGO representatives. The organization also used satellite images to assess the scale and extent of demolition of buildings in Cizre between February and June.

The Turkish Government has not responded to the call by the UN High Commissioner for Human Rights, Zeid Ra’ad, for an investigation of potential violations by the security forces. Meanwhile, Parliament has passed a law requiring pre-authorization from the Prime Minister’s office or the local district governor’s office to investigate and prosecute soldiers and public officials alleged to have committed crimes during counter-terrorism operations.

Human Rights Watch says that the February mass deaths of the 130 people in Cizre “should be a priority for investigation by the UN fact-finding mission if it is granted access”.