Syria Daily: US Airstrikes “Hit School”, Killed Up to 160 People 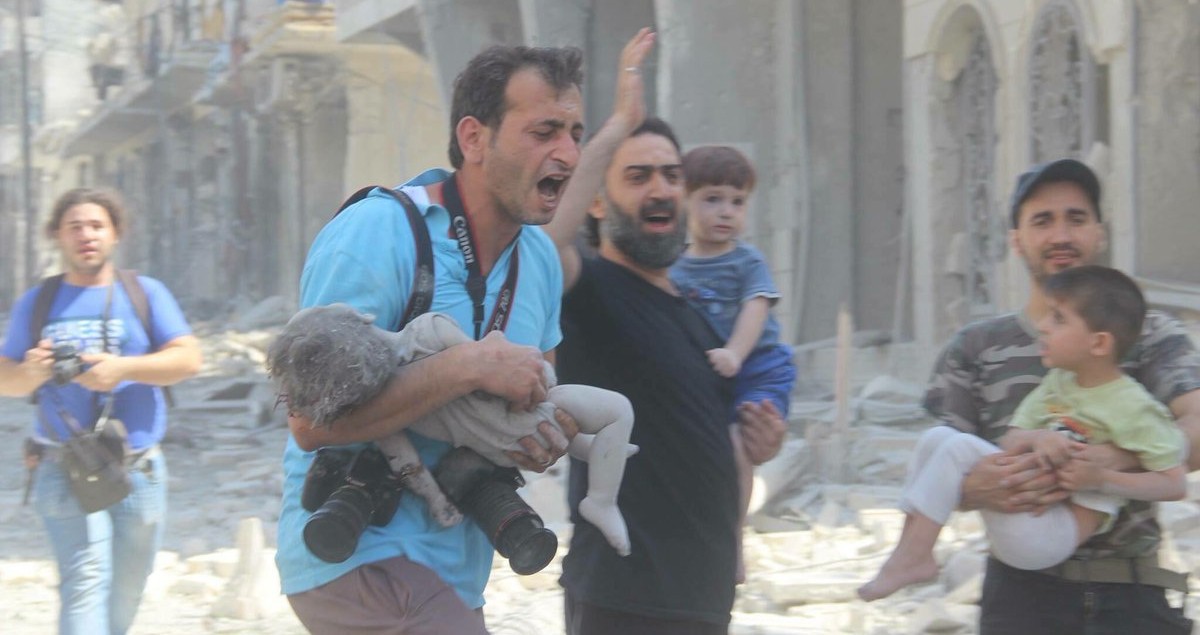 PHOTO: Claimed image of men carrying young victims of US airstrikes on and enar Manbij

US warplanes killed up to 160 people in their attacks on ISIS-held Manbij in northern Syria on Monday and early Tuesday, according to local citizen journalists and activists.

The strikes included six missiles fired on a school that sheltered displaced Syrians, the sources said.

Graphic photos have been posted of victims, many of them children.

“That school housed displaced people from neighboring villages,” citizen journalist Abu Omar al-Manbiji said. “So far we count 124 dead from the attack, and that number could very well increase.”

The US Central Command had said on Monday, “Near Manbij, 11 strikes struck eight separate [IS] tactical units.”

As of Wednesday morning, it had not issued a specific statement on the school attack. However, CENTCOM told a journalist from Telesur that it is “aware of reports alleging civilian casualties in the area”:

If the information supporting the allegation is determined to be credible, we will then determine the next appropriate step.

We take all measures during the targeting process to avoid or minimize civilian casualties or collateral damage.

The US aerial attacks are supporting an offensive, begun in May, by the Kurdish-led Syrian Democratic Forces to take Manbij. The city, captured by the Islamic State in early 2014, is the group’s main position in Aleppo Province.

Airwars, a London-based monitor, said the US-led coalition has declared 450 strikes in the Manbij area since May 21. About 70,000 people are estimated to still live in Manbij, 30 km (19 miles) south of the Turkish border and 100 km (62 miles) northeast of Aleppo city,

Chris Woods, director of Airwars, said there have been 37 separate incidents in which civilian casualties have been claimed, including 13 in the past week.

The leading rebel faction Ahrar al-Sham issued a statement denouncing the US attacks:

The existence of ISIS, which we fought before the coalition [began operations], does not give the coalition forces and criminal militias backed by it a license and justification [for] the killing of our people and their deportation.

Bodies in the Streets

“Manbij’s parks have turned to graves in order to absorb the city’s dead — both civilians and soldiers with Daesh,” said a Manbij resident last weekend.

The resident said bodies are decaying in the streets because residents cannot clear them.

With Manbij surrounded by the SDF and bombings destroying infrastructure, there are shortages of fuel, food, water, electricity, and medicine, the source added.

Casualties from Russian-Regime Strikes in Aleppo

More Syrian civilians died on Tuesday from Russian and regime airstrikes on opposition-held areas of Aleppo Province. Activists said 22 people were killed in an attack on Atareb, west of Aleppo city:

The Local Coordination Committees documented 187 deaths across Syria on Tuesday, 135 of them in Aleppo Province.

A man cries over his wife and unborn child in Aleppo:

A survivor of an airstrike on Maarat al-Nu’man in Idlib Province: 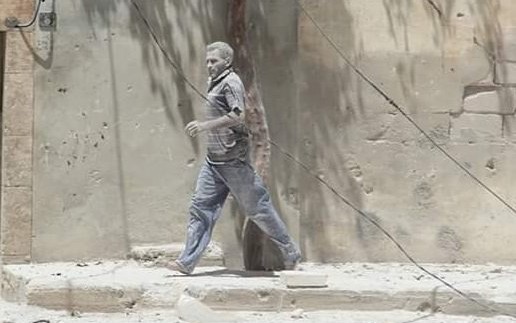 Pro-regime accounts are claiming that the Syrian military and allied militias have defeated another attempt to break the siege of the last road into opposition-held Aleppo city.

The accounts assert that the pro-Assad forces captured several armored vehicles during an attack which included Ahrar al-Sham and the jihadists of Jabhat al-Nusra.

The rebel-Nusra attacks were the third attempt to push back regime forces since the pro-Assad offensive established fire control over the al-Castello road two weeks ago.

Russian and regime bombing has taken out of service the last remaining ambulance service in western Aleppo Province.

The director of the service, Taysir Hammoud, said intense airstrikes by Russian forces in recent days had severely damaged the equipment of the medical center, especially ambulance vehicles.
He said three crew from ambulance teams were killed trying to rescue victims of battles and airstrikes in the area.

Set up in 2014, the ambulance service center in western rural Aleppo has 15 medics, 9 ambulance drivers, and 4 administrative staff members.

Last week, the only hospital in the town of Kafr Hamra in northern Aleppo Province was destroyed in Russian airstrikes on Thursday, killing three medics.

According to the Syrian Network for Human Rights, the Russian air force targeted at least 243 vital civilian facilities, including five displaced persons’ camps between September 2015 and March 2016.

Israeli warplanes have struck a regime building in al-Ba’ath in Quneitra Province in southwest Syria.

Al-Ba’ath, also known as New Quneitra, is near the Israeli-occupied Golan Heights.

The rebel faction Nour al-Din al-Zenki has issued a statement promising the trial of a fighter who was filmed executing a boy, amid battles north of Aleppo.

The faction said a judicial committee has been established to investigate the circumstances and issue a verdict as soon as possible. It said all suspects have been detained, and it promised to enforce the decisions of the court.

Graphic video and pictures showed fighters posing with the boy before one of them took him to the back of a pick-up truck and executed him.

The boy, identified as Abdallah Issa from the Sheba district of Homs city, was reportedly with the pro-Assad, mainly-Palestinian al-Quds Brigade when he was captured.

The al-Quds Brigade is part of a pro-Assad force which attacked Handarat, north of Aleppo city, early Tuesday.

US Secretary of State John Kerry said on Tuesday that the US and Russia have planned “concrete steps” for their intervention in Syria.

Kerry did not speak about the center to exchange intelligence and coordinate airstrikes against the Islamic State and the jihadists of Jabhat al-Nusra. Instead, he said that more work was needed on steps to be implemented and emphasized that the US is urging Russia to persuade the Assad regime to halt bombing of opposition groups and civilians.

The Secretary of State said of his latest talk with Lavrov:

We both believe that we have an understanding of the direction we are going in and what needs to be achieved. Our teams will meet shortly.

We will also do everything in our power to improve delivery of food, medicine, water, incredibly essential humanitarian needs.

Russia has indicated that any agreed US-Russian cooperation will also include attacks on Syrian rebel factions, as they have not “separated” themselves from Jabhat al-Nusra.

France Calls for Pressure on Assad

In a contrasting statement, French Foreign Minister Jean-Marc Ayrault called for pressure on the Assad regime to avoid deadly sieges and attacks across the country.

Ayrault spoke both of the imminent siege on up to 400,000 people in opposition-held Aleppo city, after pro-Assad forces established control over the last route into the area, and the siege, bombardment, and ground attacks on Darayya near Damascus.

“We are extremely concerned by the situation in Aleppo, but Darayya as well,” Ayrault said. “Darayya is a symbol and we fear a real massacre.”

Before meeting US and European counterparts, Ayrault referred to the November Presidential election in the US, “What we cannot accept is to wait for election calendars. We need to launch a call to help those besieged.”