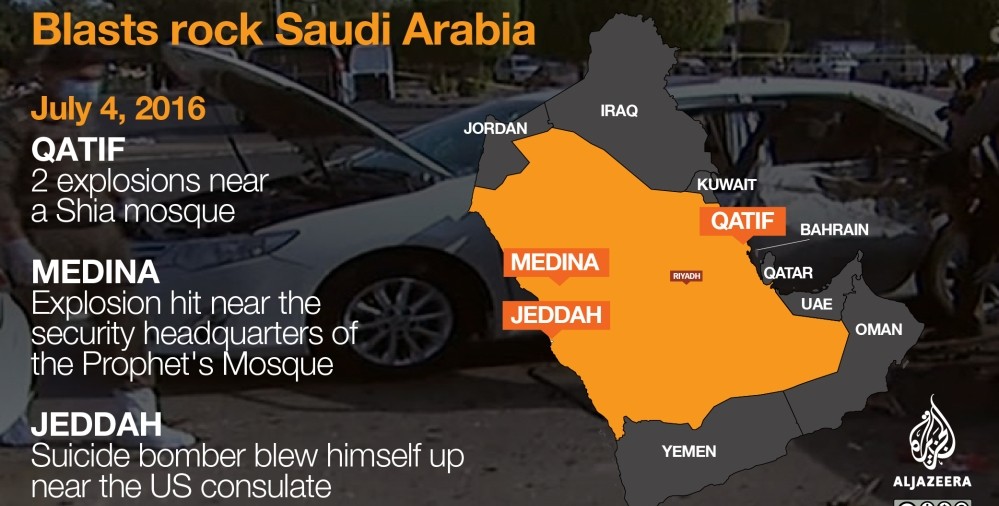 Saudi Arabia was hit by three bombings on Monday night, with two near mosques in Medina and Qatif and another near the US Consulate in Jeddah.

Initially some reports said the cause of the fire, outside the burial place of Prophet Mohammad, was a gas cylinder. However, these were overtaken by news of the bombing in Qatif on the Gulf coast.

Witnesses in Qatif said the suicide bomber did not cause any other injuries near the mosque.

On Monday morning, two security officers were lightly injured when a suicide bomber blew himself up near the US consulate in the Red Sea port city of Jeddah.

Security officers moved to investigate a man arousing suspicion near the car park of Dr Suleiman Faqeeh Hospital, across from consulate. The suspect then detonated his suicide belt. blew himself up with a suicide belt inside the hospital parking”, the ministry said, adding that two security officers were lightly wounded.

The Islamic State has claimed responsibility for attacks last August inside a special forces headquarters in the city of Abha, killing 15 people, and in October at a Shia mosque in Najran, leaving one dead.

In January an attack on a Shia mosque in the eastern al-Ahsa region claimed four lives.