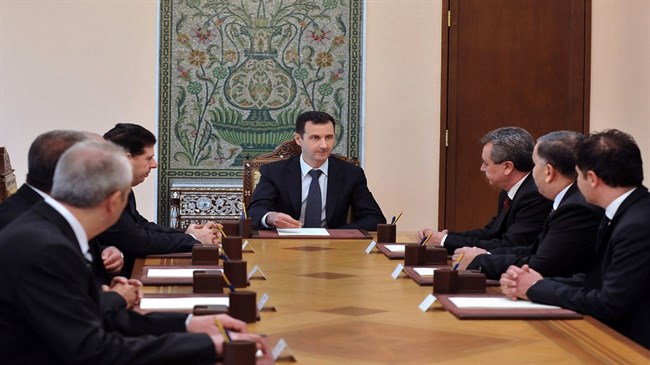 The most significant change was the naming of Central Bank head Adib Mayaleh as Economy Minister.

Mayaleh recently handled the crisis over Syria’s currency, which has lost almost 90% of its value since the beginning of protests in March 2011.

The Syrian pound fell as low as 640:1 vs. the US dollar in May before a series of measures and outside assistance checked the fall and brought some recovery. The pound is now about 480:1 vs. the dollar.

Syrian GDP has fallen about 15% per year in a conflict which has cost an estimated $275 billion by the end of 2015.

A pro-regime account says that rebels have downed another Assad regime warplane near Damascus:

The regime have lost four aircraft within a week in the Qalamoun region and East Ghouta area. At least three have been shot down with anti-aircraft missiles by the rebel faction Jaish al-Islam.

Video: Casualties from Regime Attacks on Rastan in Homs Province

The Israeli military says that it attacked two military targets inside Syria in response to “unusual” cross-border firing.

The army said the fire from Syria hit near the Golan Heights security fence, but did not threaten anyone living near the border.

The announcement is the first acknowledgement by the Israel Defense Forces of a cross-border attack.

The Israelis have periodically carried out airstrikes on targets inside Syria, notably convoys of missiles supposedly destined for Lebanon’s Hezbollah and a group of Hezbollah personnel allegedly setting up launch positions on the border.

Syrian Military Claims — But Does Not Confirm — Advance North of Aleppo

The Syrian military is claiming an advance in an important battle north of Aleppo city.

After several days of heavy fighting — and after months of offensives in the area — the army says it has “full control” over the northern part of the al-Mallah Farms and a section of the southern part.

The Syrian military and foreign allies have tried since last autumn to close off the last main route, the al-Castello road, into opposition-held parts of Aleppo. The attempts have been repelled with pro-Assad forces suffering heavy casualties.

Over the past month, the Syrian military and Iraqi and Palestinian militia have launched a series of failed attacks on al-Mallah and Handarat to the west. The latest assault began last week and reportedly includes the elite “Tiger Forces” of the Syrian army.

Pro-rebel accounts said over the weekend that the advance on al-Mallah had been blocked and that fighting had moved to the Handarat area. Today a pro-rebel outlet says that the Handarat operation also failed, with pro-Assad forces shifting their attention to western Aleppo city.

A drive on the al-Castello road:

The Syrian military claimed this morning that it has taken two building blocks in al-Layramoun in western Aleppo, where fighting has been ongoing for months. Rebels say the offensive was unsuccessful.

Footage from the pro-regime ANNA News of the fighting in Layramoun:

Meanwhile, Jabhat al-Nusra claimed that it detonated a vehicle bomb close to a regime-occupied factory (see map), causing significant damage and casualties. Footage of the operation:

Russia: Turkey May Let Us Use Its Airbase for Attacks on ISIS

Russian State media says that Turkey may let Russia use its Incirlik airbase for attacks on the Islamic state.

We’ll cooperate with all who is fighting against the Islamic State. We have opened the Incirlik base for all who want to join the active fight. Why not cooperate with Russia in this way?

“Turkey is ready for such cooperation. Terrorism is our common enemy,” Cavusoglu said, according to TASS.

However, the Turkish Foreign Minister denied the Russian interpretation: “We said that we could cooperate with Russia in the period ahead in the fight against Daesh [Islamic State]…I did not make any comment referring to Russian planes coming to the Incirlik Air Base.”

And the Kremlin was cautious about the supposed statement. Spokesman Dmitri Peskov said there had been no official talks with Ankara:

I don’t know whether there have been any official communications on this score among the military and whether they have had time to resume them. If I’m not mistaken, they have not yet been resumed. We have heard this statement through the media. No doubt, this is an important statement and it has to be duly analyzed from the political and military standpoints, which will be done by our corresponding bodies.

Last week, Turkish President Recep Tayyip Erdoğan apologized to Russian counterpart Vladimir Putin over the downing of a Russian warplane and killing of its pilot near the Turkish-Syrian border in late November. The two countries then began renewing trade and tourism links.

Since autumn 2014, Turkey has allowed a US-led coalition to use the Incirlik airbase for strikes on ISIS.

Islamic State Steps Up Bombings and Assassinations in South

The Islamic State has stepped up bombings and assassinations in Daraa Province in southern Syria, according to the pro-opposition Local Coordination Committees.

The LCC said the latest attacks included a suicide bombing of a Free Syrian Army brigade headquarters, killing three fighters. The commander of an FSA engineering battalion died as he tried to dismantle an improvised explosive device.

Near the town of Inkhil, eight civilians died when a suicide bomber attacked a residential neighborhood.

The Islamic State has targeted rebels and the opposition throughout the south, assassinating local commanders, judges, and officials.

Scholars Call for Resolution of Nusra Dispute with Rebel Faction

More than 40 scholars have issued a statement calling for a resolution of Jabhat al-Nusra’s dispute with the rebel faction Jaish al-Tahrir in northwest Syria.

Over the weekend, Nusra detained a commander and more than 30 fighters of Jaish al-Tahrir, accusing the faction of sending personnel to Saudi Arabia to meet US officials. Nusra said that the talks including discussion of the assassination of its members.

Jaish al-Tahrir is the descendant of the Syrian Revolutionary Front, a faction which was defeated by Nusra in late 2014.