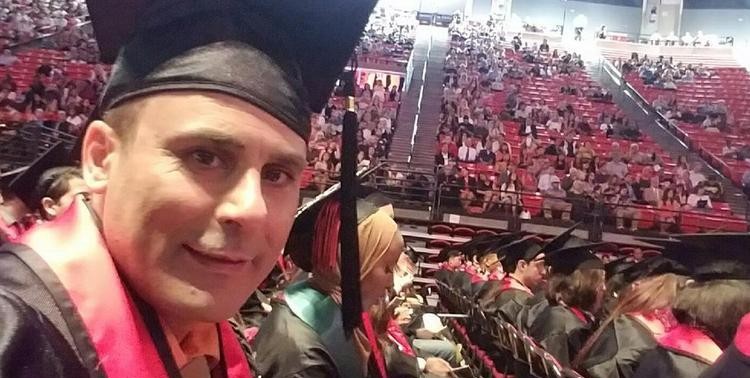 PHOTO: Robin Shahini at his graduation from San Diego State University in May

Iran’s regime has confirmed the arrest of another Iranian-American citizen.

Judiciary spokesman Gholam Hossein Mohseni Ejei told a press conference on Sunday of the detention of a dual national in Gorgan in northern Iran.

Mohseni Ejei did not give a name or the charges; however, he was probably referring to the seizure by authorities of Gholamreza “Robin” Shahini more than a week ago.

A resident of San Diego, California, Shahahini traveled to Iran this month to visit family. He was staying at his mother’s house in his native Gorgan, about 250 miles northeast of Tehran.

There is no obvious reason for his arrest, although friends noted that Shahini had been critical on social media of Iran’s human rights record. Relatives said Iranian authorities warned Shahini’s mother and other family members not to speak to the media.

US Secretary of State John Kerry has refused to comment on Shahini’s arrest, and spokesman John Kirby said only that the State Department is looking into the reports.

The Islamic Republic has regularly detained dual nationals. Five Iranian-Americans, including Washington Post correspondent Jason Rezaian and former Marine Amir Hekmati, were released in January as the July 2015 nuclear deal was implemented. However, others have been imprisoned before and after the implementation.

In April, Nazanin Zaghari-Ratcliffe, an Anglo-Iranian national working with a Thomson Reuters charity, was arrested in Tehran. She was moved hundreds of miles to Kerman in southern Iran, while her two-year-old daughter — whose passport was confiscated — was left with Zaghari-Radcliffe’s mother in the Iranian capital.

Iran does not recognize dual nationality.

The arrests come amid renewed internal tension in Iran, with in-fighting over economic planning and concerns about recovery following the implementation of the nuclear deal, the Iranian regime — led by the Supreme Leader’s denunciation of the US and warnings of foreign-led “sedition” — has stepped up warnings of “terrorism” and attempts to stir unrest.