Syria Feature: Who is Assassinating the Rebels of Ahrar al-Sham? 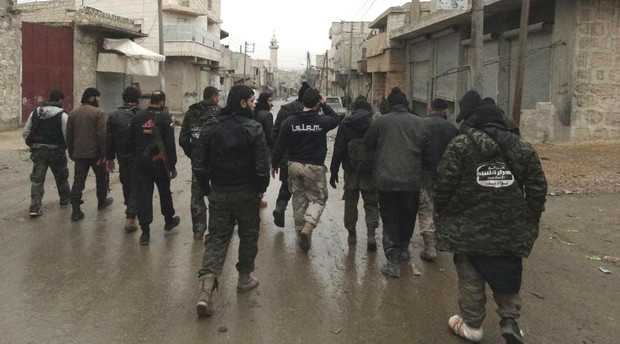 There has been a significant increase in the number of assassinations taking place in Syria, especially ones targeting the powerful Islamist group Ahrar al-Sham.

The latest attack against the group took on June 20, with two explosions striking the group’s military base and the house of a military commander in the city of Harem, Idlib, leading to two civilian casualties.

Labib al-Nahhas, Ahrar al-Sham’s foreign affairs spokesman, recently described the increasing number of attacks as a systematic campaign to destroy the group. There are several theories about who is perpetuating these attacks and why. These vary from the usual suspects — the Syrian regime and ISIS — to members within the group itself, engaging in a secret power struggle over the future of the movement.

In the past 20 days, at least 13 members of the Ahrar al-Sham movement have been killed, mainly in Idlib Province, and there have been a number of unsuccessful assassination attempts. The majority of the attacks were either carried out by planting explosive devices under the cars of targets or by ambushing fighters in public.

A quick look at the profiles of the targeted individuals reveals that the main victims are leaders or explosive experts within the movement. The killing of the group’s chief of staff Majed Hussein al-Sadeq, aka Abu Hussiei Binish, with three other members on April 23 was the latest significant attack in the string of unsolved assassinations.

It has become a habit for rebel groups in Syria to immediately link all violent incidents against them to sleeper cells affiliated with either the Assad regime or ISIS, given the long history of the two enemies secretly targeting and eliminating their opponents. Mohammed al-Shami, a leader in Ahrar al-Sham, told al-Sharq al-Awsat newspaper that the faction has been suffering from assassinations by the cells for more than a year in Idlib Province.

“The movement is one of the most infiltrated by ISIS due to the strong relations that Ahrar al-Sham members had with ISIS before the latter was forced out of rebel areas in 2015,” claims Ahmed Yousef, a former rebel fighter based in Turkey.

Recent efforts by Ahrar al-Sham to portray itself as a moderate group may be linked to the increasing number of assassination attacks. According to Syrian journalist Akil Housain, the movement is in the process of purging its traditional leadership, which is considered more radical, and replacing it with younger leaders.

“The tension between Nusra and Ahrar al-Sham is increasing because it’s becoming clear that Ahrar al-Sham is trying to distance itself from Nusra. In response, Nusra has begun targeting Ahrar al-Sham leaders in order to weaken their military capacity and maintain the group’s reliance on Nusra.”

Responding to the wave of assassinations, Ahrar al-Sham spokesperson Nahhas released a statement accusing multiple actors, including ISIS and international intelligence agencies, of targeting members of the movement to dismantle it from within via infiltration and internal coups. Although the statement is vague, it acknowledges publicly for the first time that some with the group believe that some of the assassinations may have been inside jobs.

“Some of the more radical members of Ahrar al-Sham are not happy with the new direction the group is taking so I wouldn’t be surprised to find out later that many of these attacks were part of an internal power struggle,” said a media activist in ldlib.