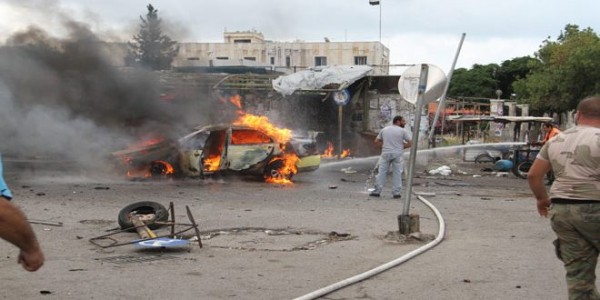 PHOTO: Aftermath of an Islamic State bombing in Tartous on Monday

The Assad regime and its ally Russia are trying to regroup after Monday’s Islamic State bombings that killed about 150 people in western Syria.

ISIS detonated seven to nine suicide and car bombs in the coastal cities of Jableh and Tartous, in the regime’a heartland of Latakia and Tartous Provinces. Targets included bus stations, electricity stations, and a national hospital.

The coordinated attacks were the first of their kind in the provinces on the Mediterranean, and they were far away from ISIS’s battlefronts with the regime and its allies in central and eastern Syria. The patterns of the bombings pointed to Islamic State “sleeper cells” or even infiltration of local agencies.

The anger of residents spilled over into attacks on displaced Syrians. Vigilantes attacked a refugee camp, burning tents and causing casualties.

The Assad regime, which has been trying to regain the military initiative after ISIS offensives in both Homs and Deir ez-Zor Province, responded by pretending that the Islamic State was not responsible. Instead, both Prime Minister Wael al-Halqi and the Foreign Ministry claimed that the leading rebel faction Ahrar al-Sham had carried out the bombings, adding that “the extremist and malicious regimes” of Saudi Arabia, Turkey, and Qatar were behind the attacks.

Russia was more cautious about the bombings, which were carried out near its main airbase in Latakia and its naval base in Tartous.

Kremlin spokesman Dmitry Peskov said that the Jableh and Tartous bombings “once again demonstrate how fragile the situation in Syria is” and that they showed “the need to continue vigorous steps to continue the negotiation process”.

Asked if Russia would reconsider President Vladimir Putin’s order in March to withdraw some of its forces, Peskov said the Russian bases in Syria allow for “a very flexible approach”.

The Russian Foreign Ministry tried to turn ISIS’s display of force into pressure on the opposition-rebel bloc:

Another bloody act of atrocity by terrorists on the Syrian soil…was committed with an uncovered goal — to disrupt the regime of ceasefire maintained in Syria since February 27 and in general to undermine the efforts on political settlement of the Syrian crisis.

ISIS Turns “Weakness” Onto the Regime

The bombings were an unexpected show of force by the Islamic State, as it is under pressure in neighboring Iraq.

After losing Palmyra in central Syria to pro-Assad forces in late March, ISIS has fought back with attacks near the Roman-era city, capturing two of the country’s largest gas fields. It challenged the regime in Deir ez-Zor city earlier this month, briefly seizing key positions amid heavy casualties for both sides.

However, ISIS appeared to be in trouble with the launch of a major offensive by Iraqi forces last week in Anbar Province, which borders eastern Syria. The Islamic State soon lost the strategic town of Rutbah, and the Iraqi forces and allied militia began their assault on the city of Fallujah on Monday.

Russia Makes Up Numbers of “Jabhat al-Nusra Fighters Near Aleppo”

Possibly seeking to justify a renewed intensive campaign of airstrikes on opposition territory, Russian officials have put out a new claim about “thousands” of Jabhat al-Nusra fighters in and near Aleppo city.

The head of the Russian Center for Reconciliation in Syria, Lieutenant General Sergey Kuralenko, proclaimed on Monday, “Al-Nusra Front leaders are finishing forming an assault group totaling over 6,000 militants in order to block the government troops in the city with a strike from the east, while in the north they seek to cut off access to the [regime-held village] of Nubl.”

Russia’s Defense Minister Sergei Shoigu said last week that warplanes will resume operations on Wednesday against Jabhat al-Nusra, which is excluded from a February 27 cessation of hostilities agreement.

Kuralenko used his claims on Monday to rationalize attacks on rebel groups as well as Nusra: “The escalation of the situation in a number of Syrian regions is first of all linked to the goal of the leaders of Al-Nusra Front and factions allied with it to derail the process of reconciliation.”

While the exact size of Jabhat al-Nusra’s force is unknown, analysts have estimated its strength to be several thousand fighters across all of Syria.

The Syrian army has failed again to advance in northern Latakia Province.

Supported by artillery shelling, the Assad forces renewed an attack on the al-Turkmen mountains on Monday, but they were repelled by rebels. Pro-opposition outlets claimed significant casualties among regime troops.

Rebels responded with shelling of a regime-held village and hill in the area.

Last Saturday, rebels foiled an attack by the Syrian army on al-Haddadah hill in the al-Akrad mountains, claiming that scores of regime soldiers were killed.

Enabled by Russian airstrikes last autumn, the Assad forces gained territory in northern Latakia, including the town of Salma, but they have struggled to make headway after a February 27 “cessation of hostilities” which limited Moscow’s aerial operations.

Russia has called for a 72-hour truce near Damascus between pro-Assad forces and Syrian rebels.

Moscow issued the statement on Monday night, a day after 39 Free Syrian units threatened a renewal of attacks across the country if the regime assaults on the Damascus suburbs were not halted.

Last week, the Syrian military and Hezbollah captured almost all of the southern part of the East Ghouta area, amid rebel in-fighting that weakened defenses.

The pro-Assad forces have also carried out almost two weeks of aerial and ground attacks on besieged Darayya, southwest of Damascus, in an unsuccessful attempt to enter the town.

Last week, the Russian Defense Minister Sergei Shoigu called on the US to join the renewal of airstrikes on “terrorists” from Wednesday. He said that Moscow would act unilaterally if Washington rejected the initiative.

Monday’s Russian statement coincided with an appeal by the US envoy for Syria for rebels to continue observing a “cessation of hostilities”, despite the pro-Assad aerial and ground assaults near Damascus, in and near Aleppo, and in other areas of Syria.

We do not believe…that abandoning the CoH will help the situation of either the armed factions or the many thousands of ordinary Syrians who are suffering from the violent attacks of the Assad regime and its supporters.

As imperfect as it is, the CoH offers a degree of protection.