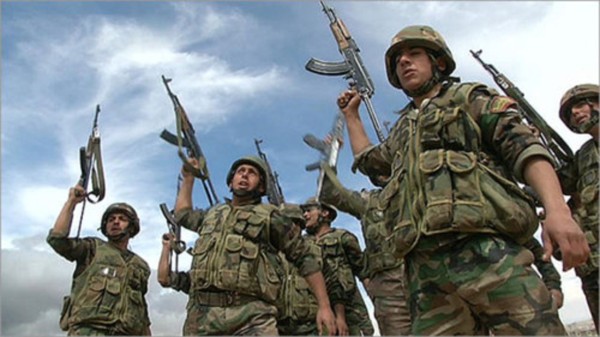 UPDATE 1645 GMT: Thirty-nine Free Syrian Army groups have issued a statement warning that the February 27 “cessation of hostilities” arrangement will be terminated, unless the Syrian military halts its aerial and ground attacks on Damascus suburbs within the next 48 hours. 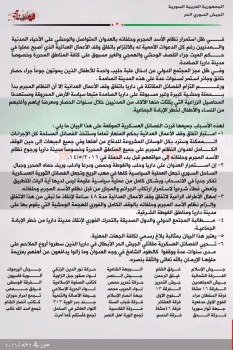 ORIGINAL ENTRY: The Assad regime and Hezbollah continued their offensive near Syria’s capital Damascus on Saturday, hoping to complete the capture of the southern part of the East Ghouta area.

Enabled by rebel in-fighting and the move of Hezbollah forces from the rest of Syria, the regime won its first notable victory in months last week with the capture of a series of villages, including Deir as-Safir and Zibdeen.

On Saturday, Hezbollah and the Syrian Army — including units of the Republican Guards and the 4th Mechanized Division — attacked the last rebel-controlled village in southern East Ghouta, Harasta al-Quntara.

The opposition has held East Ghouta since 2012, but defenses have been weakened by battles between the laading faction Jaish al-Islam and the groups Failaq al-Rahman and Jaish al-Fustat, linked to the jihadists of Jabhat al-Nusra. After weeks of fighting, with casualties on both sides, a tentative ceasefire was reached earlier this month. However, it soon broke down, and pro-Assad forces seized the opportunity to strike.

Video: Stream of Raw Sewage in Jobar — Is Regime to Blame?

A stream of raw sewage in opposition-held Jobar in northeast Damascus:

Activists claim that the Assad regime has deliberately destroyed pipes in the area to add to the devastation of Jobar, occupied by rebels since 2012.

Pro-Assad forces have again tried to enter Darayya, the town southwest of Damascus which has been besieged since November 2012.

Regime aircraft bombarded Darayya throughout the day and night, but rebels said they repelled the ground offensive, causing significant casualties.

On May 12, the Syrian military turned back a UN convoy which was trying to deliver the first aid to the town in 3 1/2 years. People gathered for the assistance were shelled, killing a father and son and injuring five others.

The regime then began sustained bombing and shelling of Darayya, trying to break resistance to the entry of troops.

General Joseph Votel, the new commander of US forces in the Middle East, has visited positions in northern Syria.

Votel, who became head of US Central Command seven weeks ago, is the highest-ranking American military officer known to have entered Syria during the five-year conflict.

Votel flew into northern Syria from Iraq, where he conferred on Friday with US and Iraqi military commanders over the campaign against the Islamic State. After landing at a remote camp where American military advisers are training Syrian Arab troops in basic skills, Votel then left the reporters who were accompanying him and visited several other undisclosed locations.

The general reportedly consulted with leaders of the Kurdish-led Syrian Democratic Forces, who have received the bulk of US military support since their formation last October. 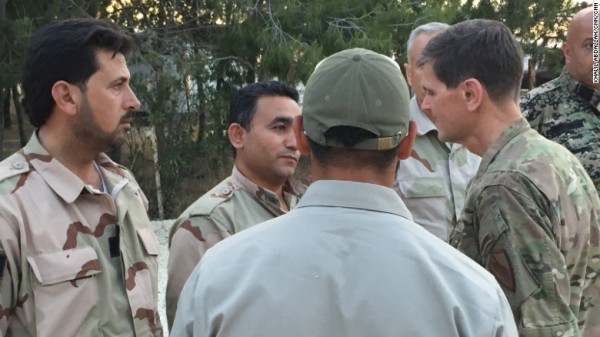 Assisted by US airstrikes, special forces, and supplies of weapons and ammunition, the SDF has advanced against the Islamic State in northern Syria, moving westwards to cross the Euphrates River.

Further offensives face political complications, such as Turkey’s suspicion of the Kurdish militia YPG who lead the SDF, and fighting between the YPG and Syria’s rebels.

In late January, President Obama’s envoy Brett McGurk spent two days in Kurdish-held areas including Kobane, the town near the Turkish border where Kurdish fighters held out for four months against an Islamic State offensive in late 2014.

SDF officials used Votel’s high-level visit to press their case for more American assistance. Spokesman Talal Selo said that US support had been “very useless” and that, at its current rate, Syrians would have to fight the Islamic State for another 50 years.

Six people were killed by an Islamic State suicide bombing in Qamishli in northeast Syria on Saturday.

Another 20 people were wounded when the bomber detonated his explosive belt inside a restaurant, after ISIS fighters had fired automatic weapons and thrown grenades.

The bombing was the third in a district with a large population of Assyrian Christians.

Kurdish forces and the Syrian military share control of the mainly-Kurdish city. The Islamic State has battled both the Kurds and the Assad regime in the area near the Turkish and Iraqi borders.

At least five members of the Kurdish security forces were killed by the double car-bombing of a headquarter in the town of Alia in Hasakah Province on Saturday.