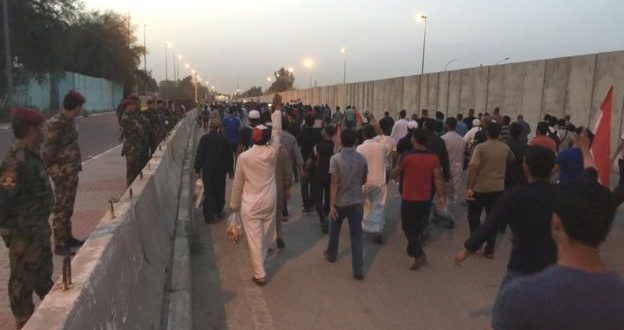 Protesters who entered the fortified Green Zone in Iraq’s capital Baghdad left on Sunday after a 24-hour occupation, but they have pledged to return by the end of the week if demands for political reforms and an end to corruption are not met.

The demonstrators, many of them followers of the cleric Moqtada al-Sadr, easily broke through barricades and barbed on Saturday. They briefly gathered in the Parliament’s chamber before moving to Celebration Square, a former parade ground for the Saddam Hussein regime.

In a statement issued from the holy city of Najaf in southern Iraq, Sadr instructed followers to leave the Green Zone in an orderly fashion, to chant for Iraq rather than a sect, and to help clean the space they had occupied.

Prime Minister Haider al-Abadi, who has been frustrated in his attempts to implement reforms and install technocrats as Ministers, called for the arrest of the protesters on Sunday.

The Prime Minister’s statement ordered “the interior minister to track down the perpetrators who assaulted the security forces, the citizens and members of the council of representatives and were involved in vandalising public property and to present them to court so they can have a fair trial and face justice”.

The protesters announced their dispersal soon after Abadi met Iraq’s President, Speaker of Parliament and leaders of political blocs “a dangerous infringement of the state’s prestige and a blatant constitutional violation that must be prosecuted”.

With the political blocs opposing Abadi’s replacement of their members in Cabinet, Parliament has been stalemated for weeks. It failed again to convene on Saturday, just before the mass protest.

In his statement, Sadr demanded that Parliament meet soon and approve a new Cabinet. If that does not happen, the cleric said he will press for the disbanding of the Government and for early elections.

Another 75 people were injured in the city of Samawa.

Sunday’s blasts, claimed by the Islamic State of Iraq and the Levant (ISIL, also known as ISIS) group, occurred in the centre of the southern city of Samawa.

The UN said on Sunday that 741 Iraqis were killed in terrorist acts and in fighting against the Islamic State in April.

The figures were a decline from March, when 1,119 Iraqis were killed, but the UN office in Baghdad said the April totals were the “absolute minimum” because of difficulties in collecting data.