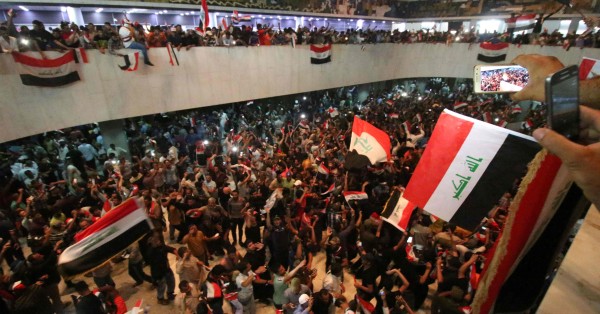 PHOTO: Protesters inside the Iraqi Parliament’s chamber on Saturday

Hundreds of protesters moved into Baghdad’s heavily-fortified Green Zone and occupied the Parliament building on Saturday, demanding an end to corruption.

Many of the demonstrators were supporters of the cleric Moqtada Sadr, who has renewed his criticism of the failure to address long-standing problems with management and corruption. They refrained from calling for the removal of Prime Minister Haider al-Abadi. Some observers, citing the ease with which the protesters entered the Green Zone, suggested that security forces and even al-Abadi — who has struggled to achieve his desire for significant reforms in Government operations — supported the show of opposition.

The protests were largely free of violence, though one MP was accosted and several vehicles were damaged. Sadr’s militia were said to have taken charge of security.

Still, the Baghdad Operations Command announced a state of emergency and deployed additional forces. Checkpoints at city entrances were closed.

Protesters shout, “Iran out! Iran out!”

By Saturday evening, protesters left Parliament and gathered in the Green Zone’s Celebration Square. Security officers fired tear gas and warning shots to prevent more people from entering, but Abadi said the “security situation in Baghdad is under control”.

Sajad Jiyad, an adviser to Abadi, said the Prime Minister was at a military compound inside the Green Zone.

Just before protesters entered the Green Zone, Sadr said from the holy city of Najaf in southern Iraq, “I’m waiting for the great popular uprising and the great revolution to stop the march of corrupted officials.”

One protester inside Parliament pointed to chocolates on the desks of lawmakers: “People have nothing to eat. The lawmakers are sitting here eating chocolates and mocking our pain.”

Iraqi politics has been paralyzed for weeks by a stalemate over Abadi’s attempt to overhaul his Cabinet with new Ministers who are technocrats instead of party officials.

Political factions have resisted the move, blocking discussion in Parliament. A session scheduled for Saturday was postponed, because of a lack of a quorum, before the Green Zone protests.

The crisis has been compounded for months by lack of effective public services, including electricity; financial problems amid the sharp fall in oil prices; and the continuing battle against the Islamic State.

A protester hands a piece of melon to a security forces officer: 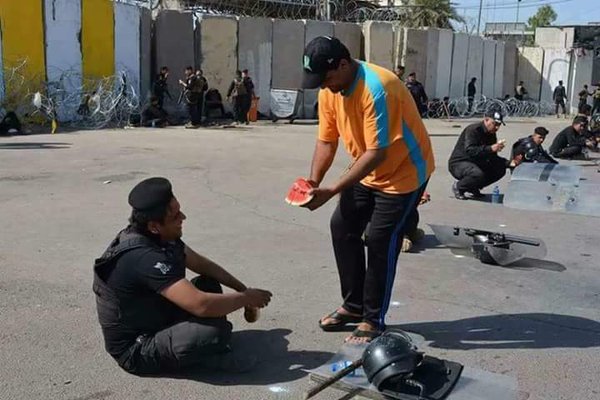