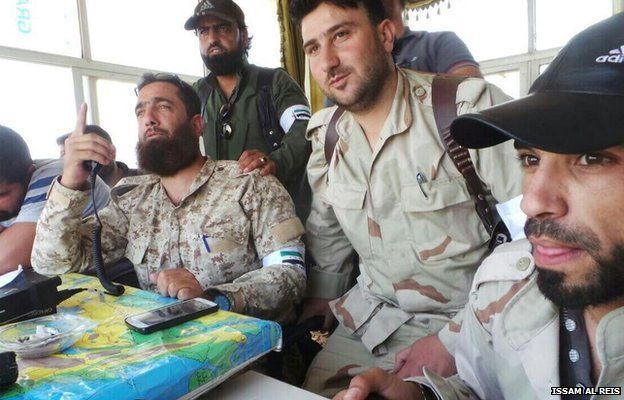 PHOTO: Officers in the rebel Southern Front, reportedly hindered by US restrictions on supplies

The pro-opposition Syrian Mirror claims that the US-led Military Operations Center, based in Jordan’s capital Amman, has set political conditions for support to rebels.

According to a rebel commander of a faction based in Idlib Province in northwest Syria, the MOC summoned representatives of all groups except those based in Homs and the Southern region.

The Colonel, who works with the MOC, said the foreign officials stated:

1. Destruction of military and security structures in Syria is a “red line”;
2. President Assad can be removed but the regime structure will remain;
3. The Syrian opposition must not demand a war crimes trial for Assad or 250 regime members who will escort him out of the country — this is a Russian condition for the end of the conflict.

“The representatives of the MOC made it clear that opposition factions must prepare themselves to join the ranks of the Syrian Army in his fight against Jabhat al-Nusra and all the armed groups that refuse to join the Army”, the commander said.

He said most rebel factions were concerned by the discussion. They fear that they will be unable to comply with the conditions because of widespread public disapproval; however, this will lead to the cutting of their military and financial support.

The MOC includes representatives of the US, Britain, France, Saudi Arabia, the UAE, and Jordan.

Rebel sources say the MOC has continued to restrict support for operations in the south. Last year, the operations center reportedly suspended arms supplies to check an advance by the Southern Front, fearing that moves on Daraa city and Suweida Province could collapse the Assad regime and inflame relations with groups such as the Druze.

Last week, sources said the US also pressed Turkey to block the movement of troops from Ahrar al-Sham and other factions into northern Syria.