Syria Feature: Russia Upset Over Report of 1,450 Civilian Casualties in 3 Months of Airstrikes 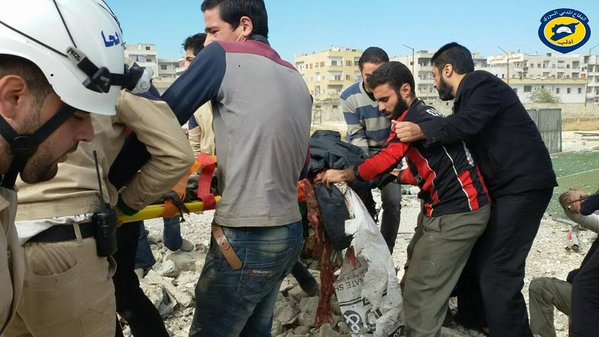 PHOTO: Men carry a casualty from a Russian airstrike on Ariha in northwest Syria, November 2015

Russia’s Defense Ministry has lashed out at a report documenting up to 1,450 civilians killed by Moscow’s airstrikes in Syria from September 30 to December 31.

The British-based Airwars Monitoring Group, drawing from open-source reporting, set out the details last week in an evaluation, “Reckless Disregard for Civilian Lives“. The Group said casualties in 192 cases had been established, while another 104 incidents are contested over Russian or Syrian regime responsibility.

The deaths in the three months outnumber those in US-led coalition airstrikes in Syria and Iraq since August 2014.

The Defense Ministry’s spokesman, Major General Igor Konashenkov, claimed on Thursday that Airwars was part of a British-based propaganda network.

Konashenkov also cited Bellingcat, which has specialized in geolocation of Russian attacks in Syria as well as Russian involvement in Ukraine, including the downing of a Malaysian passenger jet in July 2014: “All these anti-Russian ‘experts’, ‘analysts’, ‘activists’, ‘human rights activists’, and simply those who hate Russia are growing up and proliferating like poisonous mushrooms in Britain.”

The General showed concerns that the reports are having some effect on opinion inside Russia: “The absolute credulity and lack of criticism of some Russian business and economic media outlets, which are taking the works of the ‘British scientists’ seriously is…surprising.”

Russia has denied all reports of civilian casualties from its Syrian operations, including documentation by Amnesty International and Human Rights Watch. Moscow has also objected to coverage of its strikes on civilian sites, including hospitals — claiming the targeted facilities do even exist — schools, mosques, and markets.

The Syrian-based Violations Documentation Center has documented 2,062 civilian deaths from Russian attacks since the start of Moscow’s intervention.