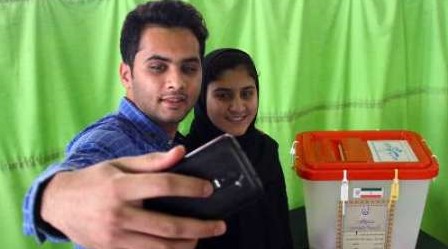 PHOTO: Voters take a selfie with a ballot box in Friday’s Parliamentary vote

UPDATE 1400 GMT: The centrist-reformist List of Hope, continuing to defy expectations, is set to become the largest group in Parliament.

The List of Hope won a majority of the 68 run-off elections held on Friday. With one seat undeclared, they will claim 131 of the 290 seats.

Conservatives, who had dominated the Majlis for more than a decade, have 124. Independents will hold the balance of power with 34 seats.

Some analysts had predicted a low turnout would benefit conservatives, but the Interior Ministry said 59% of eligible Iranians cast ballots.

The Islamic Republic will have its largest number of women MPs in history. Of the 17 going to Parliament, 14 are reformists, two are conservatives, and one is an independent.

All nine female MPs in the last Parliament were conservatives.

ORIGINAL ENTRY: Iran held run-off elections for 68 of 250 Parliamentary seats on Friday, with turnout expected to be lower than for the February 26 first round, despite an unclear balance of power in the next Majlis.

Ballots were held in 55 electoral districts across 21 provinces. Interior Ministry spokesman Hossein Ali Amiri said results should be announced on Saturday, but noted that this could change.

The run-offs have taken on added importance after the unexpectedly strong performance of a centrist-reformist bloc, allied with President Rouhani and former President Hashemi Rafsanjani, in the first round. Despite mass disqualification of candidates by the Guardian Council, the List of Hope won a large minority of seats, challenging the hardline-conservative dominance of Parliament since 2004.

See Iran Feature: Parliamentary Run-Offs and the Balance of Power

Friday’s voting was held largely without incident, although four people were wounded by gunfire in southwest Iran when supporters of rival candidates clashed.

Meanwhile, prominent MP Ali Motahari reopened an incident from the first ballot, when the Guardian Council banned a female reformist candidate after she won her seat.

Motahari, a “maverick” conservative, said President Rouhani must order Parliament to review the credentials of Minoo Khaleghi, who was barred without explanation about a supposed of qualifications.

The MP said, “Based on the Constitution, any representative who is elected in a district after voting takes place must then have credentials reviewed in Parliament. No other institution can interfere in this.”