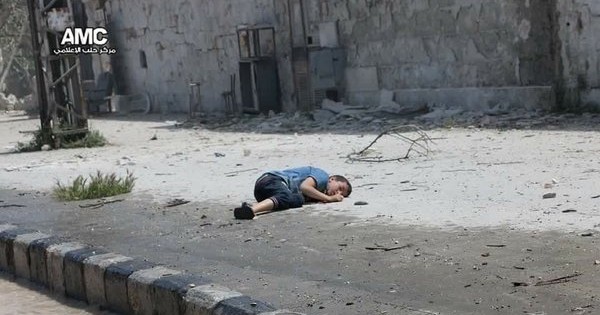 PHOTO: A child lies dead in the street after Friday’s Russian-regime airstsrikes on Aleppo

UPDATE 1100 GMT: Activists report more Russian-regime bombing of numerous areas in and near Aleppo on Saturday. More than a dozen civilians have reportedly been killed. 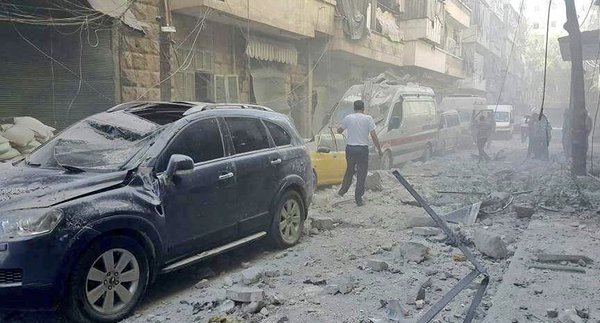 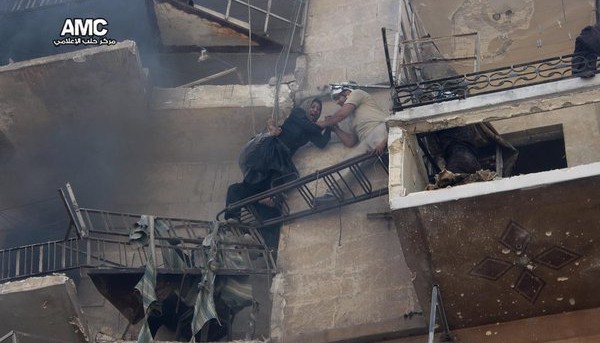 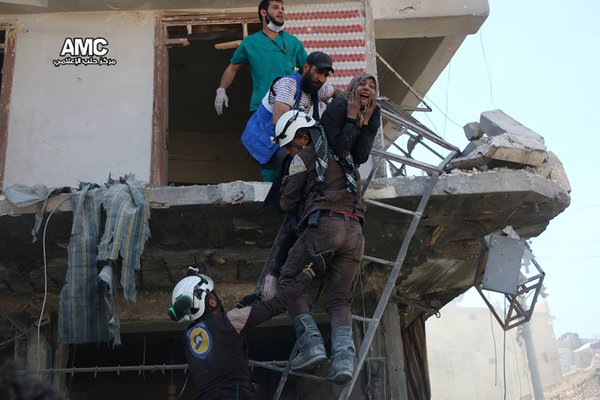 Regime forces are also shelling Douma, northeast of Damascus, where hundreds were killed last autumn by attacks. Another 13 people, included three women and two children, have reportedly died and more than 20 were injured.

ORIGINAL ENTRY: In a surge of bombing on Friday, Russian and regime warplanes bombed opposition-held areas of Aleppo, Syria’s largest city, killing at least 18 people and wounding more than 40.

Attacks on Aleppo, where thousands of people have been killed by airstrikes in the past year, had diminished since a February 27 cessation of hostilities. Russia, which began strikes on September 30, had halted their operations.

However, foreign allies such as Iran and Hezbollah are facing an offensive by rebels and Jabhat al-Nusra south of Aleppo city. To the north, the Syrian military and its partners have been frustrated in attempts to take territory, cutting off the main route to opposition sections of the city.

So on Friday, Russia rejoined the regime’s bombing, including areas such as Bustan al-Qasr, Layramoun, Sukkari, Saleheddin, and al-Ansari. North of the city, the warplanes targeted the al-Castello road and the route near Handarat.

The White Helmets civil defense organization said of the assault on Aleppo and far beyond:

Today has been the worst day in Syria for over a year. Attacks are everywhere….Tracking attacks in Aleppo, Idlib, Homs and Damascus. Furious intensity. Teams report streets littered with bodies….We return to work with sadness and heavy hearts. 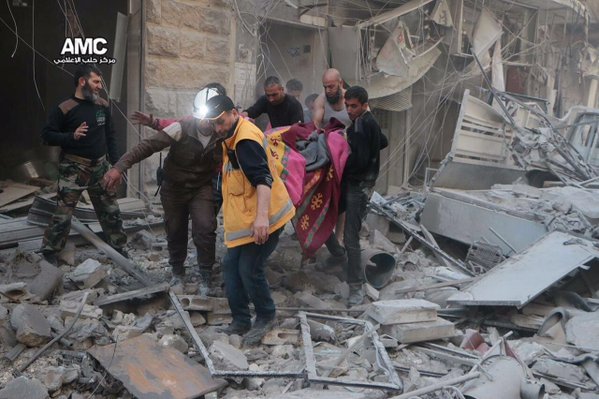 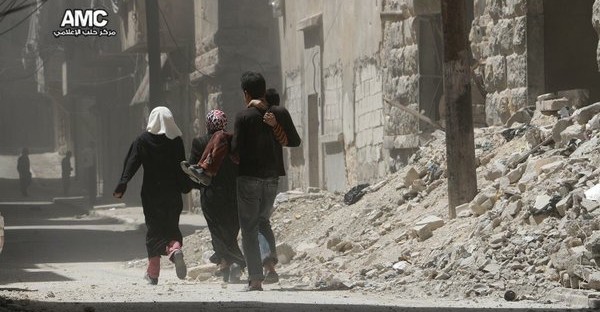 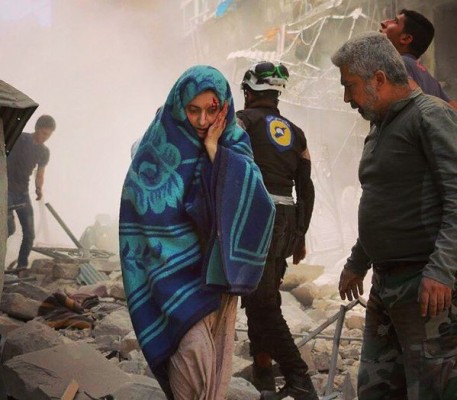 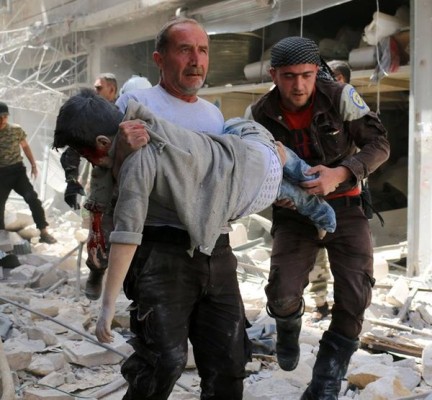 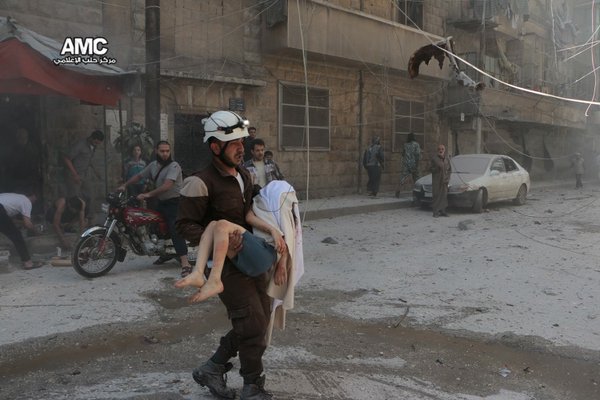 Talks Near Collapse in Geneva

The attacks came as political talks to resolve Syria’s crisis were collapsing in Geneva. The opposition-rebel bloc said earlier this week that it was formally suspending participation because of regime sieges, bombing, and detentions.

The regime delegation met UN envoy Staffan de Mistura but showed no sign of lifting its refusal to discuss the future of President Assad and a transitional governing authority. Instead the head of the delegation, UN Ambassador Bashar al-Ja’afari defended the regime over its continuing refusal to allow aid to areas across Syria.

Ja’afari insisted that aid has been delivered on 42 occasions, in a total of 219 trucks, into “unstable or restive” areas in the last four months.

The ambassador cited a Wednesday convoy of 65 trucks into Rastan in Homs Province, which had not received aid since 2012. However, he did not speak of other towns which continue to be blockaded, such as Darayya, southwest of Damascus.

De Mistura insisted after the meeting that the February 27 cessation of hostilities is still in effect but “in great trouble if we don’t act quickly”. He said a meeting of the International Syria Support Group, led by Russia and the US, is “urgently required”.

US Secretary of State John Kerry warned on Friday that Russia has moved heavy artillery into position north of Aleppo, in possible preparation for renewed attacks by the Syrian military, Iranian and Iranian-led units, and Hezbollah.

US officials had told The Wall Street Journal earlier in the week of the Russian movement, and Kerry added weight to the warning in a meeting with The New York Times editorial board.

Kerry said he was generally encouraged by Russia’s participation in the diplomatic effort, which has included partnership with the US to renew political talks in Geneva> however, he said he was not certain if President Vladimir Putin was sincere in his stated aim of combating “terrorism” for the buildup.

“We are not going to sit there and let him do his thing supporting the regime and hammer at the opposition and say, ‘This is working’,” Kerry said. “Obviously, we’re not stupid about it.”

Asked whether the Russian escalation was really aimed at the jihadists of Jabhat al-Nusra or was just propping up President Assad, Kerry said, “We have yet to discover whether they are bona fide.”

But the Secretary of State appeared to show some sympathy for Moscow’s line about Nusra’s integration with Syrian rebels:

[It] has proven harder to separate them than we thought. And there’s a Russian impatience and a regime impatience with the terrorists who are behaving like terrorists and laying siege to places on their side and killing people.

He suggested that Washington and Moscow are devising a way to separate Nusra and the rebels:

We’ve even proposed drawing a line, an absolute line, and saying, “You don’t go over there, we don’t go over here, and anything in between is fair game.” And they are considering that, and I think we will get there in the next week or so.

Picture: Cleaning Up in Kafranbel After Regime Airstrikes

Volunteers in a campaign to clean up Kafranbel in northwest Syria after regime airstrikes: 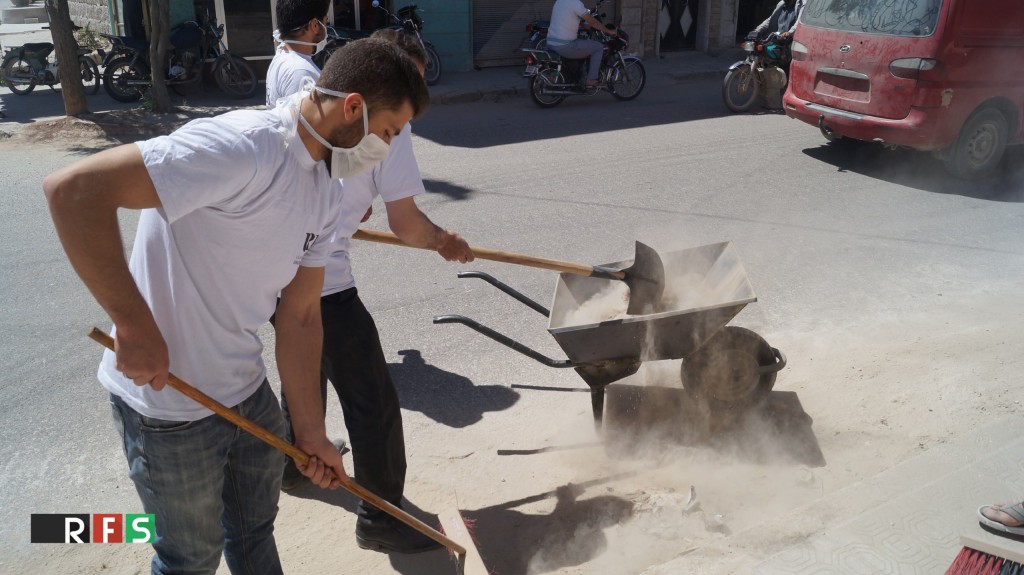 The top aide to Iran’s Supreme Leader has reaffirmed Tehran’s support for the continued rule of President Assad.

Ali Akbar Velayati, a former Foreign Minister, said any political settlement must maintain Syria’s “territorial integrity, independence as well as the legitimate government of President Bashar al-Assad”, which had been elected by the Syrian people.

Velayati, who met the Syrian Ambassador to Iran, said the US and other sponsors of “Takfiri terrorists” will fail to “install a puppet regime”.

Russian Foreign Minister Sergei Lavrov has again labeled the leading rebel factions Jaish al-Islam and Ahrar al-Sham as “terrorist”, saying that they are just like the Islamic State and the jihadists of Jabhat al-Nusra.

Lavrov was commenting on Friday about the decision of the opposition-rebel bloc to formally suspend participation in the political talks in Geneva. He dismissed the move, saying the High Negotiations Committee is dominated by “radicals” like Jaish al-Islam:

Jaysh al-Islam more and more proves that we were right when seeking to include them to the list of terrorists….These organizations like Ahrar ash-Sham in fact actively prove that they fully share anti-human approaches of the Islamic State and Jabhat al-Nusra groups.

Before the launch of the Geneva talks in January, Lavrov claimed the HNC was illegitimate because it included Jaish al-Islam. Ahrar al-Sham attended the conference in Saudi Arabia establishing the bloc, but did not sign the agreement for its formation.

A Syrian jet fighter crashed east of Damascus on Friday, with the pilot captured by the Islamic State.

Amaq News Agency, linked to ISIS, identified the pilot as Azzam Eid from Hama. It claimed the warplane had been shot down. 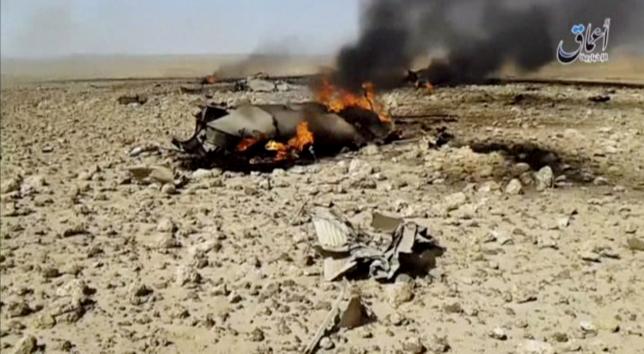 A view of the burning wreckage of a plane that crashed southeast of Damascus, Syria in this still image taken from video said to be shot April 22, 2016. Social Media Website via Reuters TV