Syria Daily, April 3: A Rebel Fightback in the Northwest

PHOTO: An Ahrar al-Sham fighter prepares an attack on the southern Aleppo front

Rebels and Jabhat al-Nusra continued their fightback in northwest Syria for a second day, taking territory in Latakia Province as well as south of Aleppo city.

The advance began on Friday, with rebels claiming that the Assad regime had broken the February 27 cessation of hostilities with operations on the southern Aleppo front. The rebel-Nusra offensive captured hills and the town of Tal al-Eis on the Aleppo-to-Damascus highway.

Attacks on Saturday put more pressure on the regime lines from Khan Touman to al-Hadher, both of which had been taken in last autumn’s offensive by Iranian troops, foreign militia, and the Syrian Army, enabled by Russian airstrikes.

Raw footage of the fighting:

Yesterday rebels also reportedly reclaimed their first villages in Latakia Province, on the Mediterranean, since the regime-Russian-Iranian offensive in October.

The Free Syrian army and allied groups moved into the villages of Nahshba, Rasha, al-Jinzali, al-Mazighli, and Malik and the Hidada and Rasha hills. They attacked regime headquarters in the town of Kinsabba in Mount al-Akrad with heavy weapons and Grad rockets.

The Syrian military, with intense Russian bombing, moved in Kinsabba in mid-February.

A rebel source said that a colonel was among regime casualties, and that a tank was destroyed and four machine guns were seized.

Reports are circulating that a US drone strike in Idlib Province has killed a Jabhat al-Nusra commander and more than 20 fighters from Nusra and fellow jihadists Jund al-Aqsa.

The commander, Abu Firas al-Suri, reportedly was based in Yemen before entering the Syrian conflict. He was featured in a 43-minute Nusra documentary, “The Heirs of Glory”, released last summer.

Rebels Claim Victories Over Islamic State in Both North and South

Rebels are claiming victories on Sunday over the Islamic State in both northern and southern Syria.

In northern Aleppo Province, rebels have taken the villages of Tathumus (see map), Qarah Quz, and Kadrish. They are reportedly attacking Sandarah and Kadrish (see map).

Rebels and ISIS have battled for more than two years in the area, with fluctuating frontlines. The rebels were under pressure earlier this year as they faced attacks from the regime-Russian-Iranian offensive, Kurdish forces, and the Islamic State at the same time.

However, since a partial cessation of hostilities on February 27, rebels have regained the initiative. The offensives are also being boosted by assistance from Turkish artillery.

A rebel with the revolution flag at Tathumus: 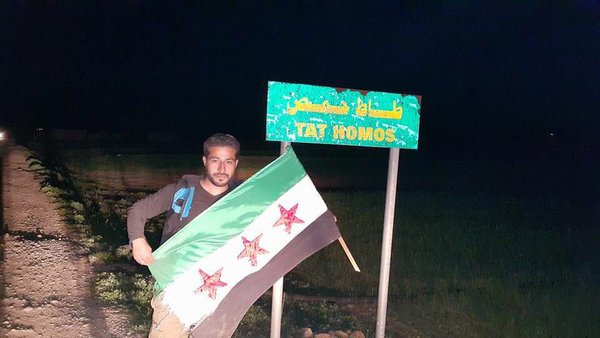 Meanwhile, in western Daraa Province in southern Syria, rebels have pushed back a recent surge by ISIS-affiliated factions. On Sunday, they claimed a series of villages as Liwa Shuhada al-Yarmouk and Harakat al-Muthanna withdrew.

An Ahrar al-Sham photo of Jileen: 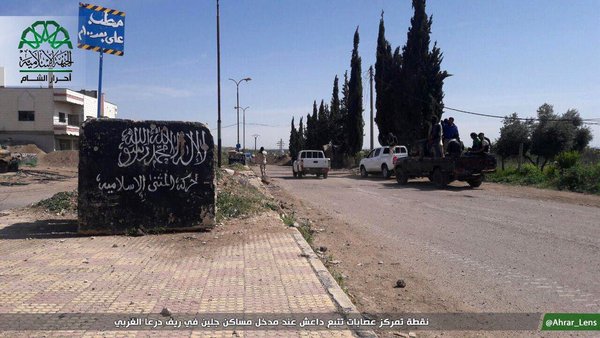 Rebels moving in the area:

Turkey has set two conditions on its acceptance of the Kurdish-led offensive against Manbij, a town in northeastern Aleppo Province held by the Islamic State.

Unnamed officials said Ankara has demanded that Syrian Arab tribes leave the Kurdish-led Syrian Democratic Forces, and that the US increase airstrikes for Turkish-supported Syrian rebels fighting ISIS on the frontline at Mare’, west of Manbij.

Turkey had said that any SDF advance west of the Euphrates River would be a “red line”. However, the US has continued to provide weapons, ammunition, and special forces for the Kurdish-led coalition.

Ankara maintains that the Syrian Kurdish Democratic Union Party (PYD) and its YPG militia are led by the Turkish insurgency PKK, which has fought for more than 30 years for Kurdish independence.

Before Erdoğan’s meeting with Obama and Biden, the pro-Government outlet Daily Sabah castigated the US for airstrikes supporting the SDF near Manbij.

Turkish officials said a group of US military and intelligence staff are arriving in Turkey on Monday to discuss the operation to capture Manbij.

Supported by Russian airstrikes and foreign militia, the Syrian military has captured the town of Quraytayn in southeastern Homs Province from the Islamic State.

The advance comes a week after pro-Assad forces recaptured the historic city of Palmyra, to the east of Quraytayn.

The Islamic State moved into Quraytayn in August 2015, three months after it took Homs in a rapid offensive across Homs Province.

State news agency SANA said that the Syrian army also cleared areas to the northwest of Quraytayn, clearing dozens of explosive devices and mines, and that airstrikes hit ISIS in the southern and eastern sections of the town.

Claimed footage of a regime rocket attack on the al-Wa’er section of Homs, killing two children and an elderly woman and wounding 15 people:

Al-Wa’er is the last opposition-held area of Homs, Syria’s third-largest city. A truce was reached in December, but the the regime has continued to attack the area periodically.

Prices in Damascus are spiking farther as the Syrian pound continues its sharp decline, according to a report on the business site Aliqtisadi.

Opposition in Damascus Province Appeals to UN Over Regime Bombing

The opposition council in Damascus Province has appealed to the UN to help halt regime bombing that has killed dozens of people in the capital’s suburbs in the past week.

The council also addressed the open letter to countries supporting the Geneva political talks and the opposition’s High Negotiations Committee: “We ask the real friends of the Syrian people to provide protection against the genocidal practices it is undergoing.”

The council said the continued bombing was evidence that the UN and the international community could not halt regime attacks and sieges, or “commit to a process that leads to a credible political transition that would fulfill the aspirations of the Syrian people”.

The Syrian military’s bombing of Damascus suburbs killed at least 37 people on Wednesday and Thursday, including 33 in Deir as-Safir, southeast of the capital.