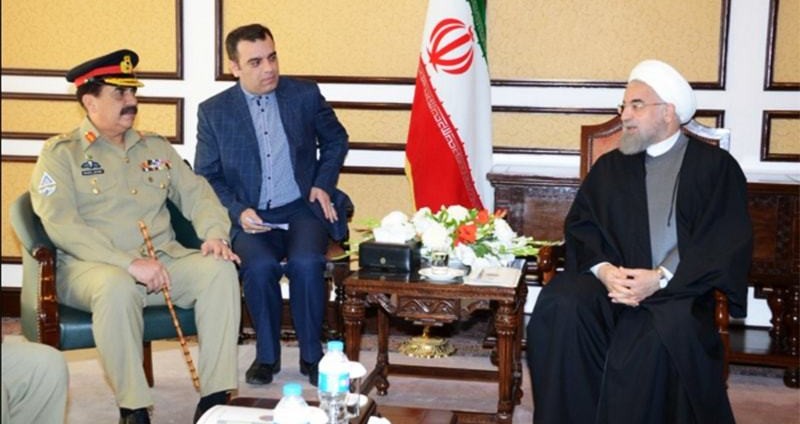 Expectations were high when Iran’s President Rouhani landed on Pakistani soil — with an entourage of 60 people including Government ministers, bureaucrats, and businessmen — on his first official visit on March 25.

Rouhani was greeted with a 21 gun-salute and Pakistani and Iranian flags lining all major roads and intersections in Islamabad. His delegation looked forward to fulfilling strategic, economic, and political goals, including a security accord over the Pakistan-Iran border and assurances on a 2,775 km (1,724-mile) gas pipeline whose construction has been held up for years on the Pakistani side.

Then the atmosphere turned sour.

On the night before Rouhani’s arrival, Pakistani news outlets reported the arrest of an alleged operative of the Indian Intelligence Agency RAW (Research and Analysis Wing).

The stories said Kulbhushan Yadav was a serving Indian Navy officer with the rank of commander, working under the Muslim alias of Hussain Mubarak Patel. He was allegedly involved in helping Baloch insurgents, disrupting law and order, and sabotaging the proposed China-Pakistan Economic Corridor in Balochistan Province.

Iran was drawn into the affair with the claim that Yadav had two passports with his different identities, each containing valid Iranian visas and work permits. He reportedly said during interrogation that his cover was a jewellery shop in a mall in the port city of Chabahar in southern Iran.

Chabahar is being developed by India in a high-profile project to boost Iran’s trade. However, the Pakistanis see it as an Indian strategic asset which is competing with the Pakistani port of Gwadar, developed by China as the starting point of the China-Pakistan Economic Corridor.

When Rouhani met Pakistan’s Army Chief, General Raheel Sharif, he was greeted with the message:

There is one concern: RAW is involved in Pakistan, especially Balochistan and sometimes also use the soil of our brother country Iran. I request, they should be told to stop these activities and allow Pakistan to achieve stability.

Sharif had pointedly intervened against two governments. To his own, he was indicating that the military — long concerned with what it sees as Prime Minister Nawaz Sharif’s weakness in countering insurgents — would take the initiative on the security front, even if that meant complications for foreign policy.

To Tehran, the General was demanding a reply. Pakistan had helped maintained border security and had worked with Iran over the arrest and execution of leaders of the Baloch insurgency Jundullah. It had been rewarded with the Islamic Republic’s support, whether deliberate or unwitting, of Indian espionage in support of an economic battle with Islamabad.

The Yadav episode changed the dynamic of the talks. No major progress was made over the pipeline issue and the security agreement. Six memoranda of understanding in commerce and trade were signed, but there was little of substance to back Rouhani’s goal of raising Iranian-Pakistani business from $1 billion to $5 billion.

Rouhani tried to cover up the damage, denying that the spying allegtions had been discussed in his meeting with General Sharif: “Rumours start swirling whenever we come closer to Pakistan and Iran enjoyed brotherly relations with both India and Pakistan”.

But the President had only exacerbated the conflict by downplaying Pakistani national security and putting India — despite the claimed espionage — in the “brotherly” box alongside Islamabad. As Rouhani returned to Tehran, the Pakistani military released transcript of his conversation with Sharif. Later in the week, Pakistan officially sent a dossier to Iran, demanding the handover of another RAW operative and the sharing of intelligence about Yadav’s activities. Pakistan media asked how Iranian Intelligence could have no clue of the RAW network, prompting the Iranian to issue a statement that some outlets were “spreading baseless propaganda” that could affect bilateral relations.

On Saturday, Rouhani marked the second day of his visit with a meeting with Pakistani President Mamnoon Hussain and the declaration, “Strengthening border markets, moving towards free trade and creating joint commercial accounts can further deepen trade cooperation between the two countries.”

But his more important statement was a hostage to fortune: “As Iran’s border with Pakistan is safe, wider attempts should be made across the border in order not to see any insecurity in that part.”

Many Pakistanis, in light of the Yadav affair, are not looking for “trade cooperation”. Instead, they are wondering whether Iran’s “wider attempts…across the border” are fostering rather than preventing “insecurity”.