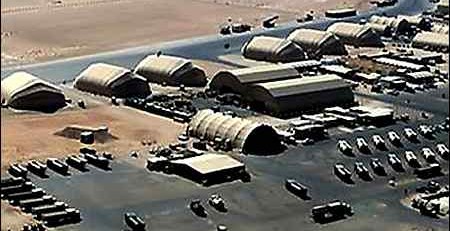 PHOTO: Rmeilan airfield, developed by the US, in northeastern Syria

Expanding its support of Kurdish-led forces, the US has nearly finished the construction of one airbase in Kurdish-controlled northern Syria and is establishing a second one.

The website BasNews, based in Iraqi Kurdistan, quoted a military source in the Kurdish-led Syria Democratic Forces for its report.

The development of the first airbase in the oil town of Rmeilan in Hasakah Province was revealed earlier this year, with Syrian Kurdish officials saying the airstrip is being used by US military helicopters for logistics and deliveries. Reports of the new airbase southeast of the Kurdish center of Kobane, near the Turkish border, circulated last weekend.

The SDF source said scores of American experts and technicians are involved in the project.

The US began shifting support from Syria’s rebels to the SDF when it was established last October, providing arms, ammunition, and special forces. The Kurdish-led force has advanced against the Islamic State in northern and eastern Syria, expanding control over the Cezire and Kobane cantons and moving west of the Euphrates River.

A spokesman for US Central Command (CENTCOM) said the US was not taking control of any airfields in Syria:

Our location and troop strength remains small and in keeping with what has been previously briefed by defense official. That being said, US forces in Syria are consistently looking for ways to increase efficiency for logistics and personnel recovery support.

Reports are circulating that the Islamist faction Jund al-Aqsa and the jihadists of Jabhat al-Nusra are attacking pro-Assad foreign militias south of Aleppo city, near the village of Khan Touman.

Regime aircraft have responded with barrel bombs near al-Eis (see map). But despite the airstrikes, the offensive has reportedly captured two nearby hills and are attacking the village.

Jund al-Aqsa and Jabhat al-Nusra appear to be taking advantage of the move of Shia militias, fighting with the Syrian military, further south in Aleppo Province to challenge the Islamic State.

Local sources say that no rebel factions covered by the February 27 ceasefire are involved. However, fighters from Ahrar al-Sham and Faylaq al-Sham are said to have joined the attacks, defying the official line of their leadership.

Hezbollah, Iranian troops, and Iranian-commanded Iraqi and Afghan militias have pursued an offensive since last October to take rebel territory south of Aleppo.

Activists report Russian or regime airstrikes on a fuel market in Abu Duhur in southern Idlib Province have killed at least 20 people and wounded 40. 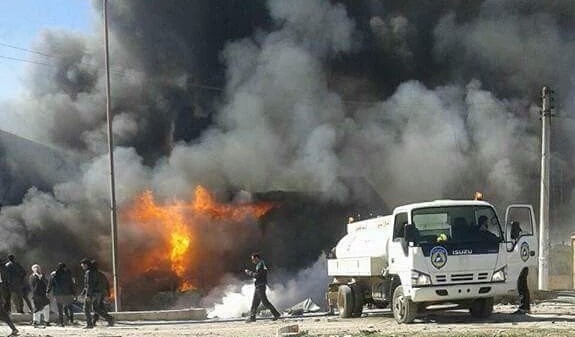 Speaking with reporters, the coordinator of the opposition-rebel bloc, Riad Hijab, cited the attack as evidence of the continuing breaches of the ceasefire by Russia, the Assad regime, and foreign militias: “Just a few minutes before we came on this conference there was a massacre committed by the air forces of the Russians and the regime in Abu Duhur.”

Hijab said the High Negotiations Committee would consult military commanders about whether to attend the resumption of talks convened by UN envoy Staffan de Mistura.

Rebels have denied shelling of a Kurdish area in Aleppo that killed at least 12 people and injuring dozens on Sunday.

The victims were in the Sheikh Maqsoud district, which has been the scene of clashes between the Kurdish YPG militia and rebel factions.

However, no one could establish whether Sunday’s shelling was by rebels, the jihadists of Jabhat al-Nusra, or the Assad regime.

Muhnna Abo Bakri, the commander of the Abo Amara Brigades in Aleppo, said that local-made missiles have a maximum range of 300 meters while Sunday’s shells traveled kilometers..

Assad terrorists deliberately shell residential areas from the security apparatuses located in the hearts of the cities to play off Syrians one against the other.

Assad follows the well-known maxim: “Divide in order to conquer.”

We chanted pro-Kurdish slogans in our Friday demonstrations. We are equal in Syrian citizenship.

Opposition Site: Another Child Dies of Starvation in Madaya

The opposition site Eldorar claims that another child has died of starvation in the besieged town of Madaya in Damascus Province, while another 110 children are suffering from malnutrition.

The site also said that a man perished on Sunday after a three-month battle with illness and malnutrition.

Madaya, northwest of Damascus, has been cut off by regime forces and Hezbollah since last July. More than 70 people have reportedly died from starvation since December 1.

Amid international attention to the crisis in January, the Assad regime finally relented and allowed two shipments of aid, sufficient for a few weeks. Another aid convoy was permitted in mid-February, but the regime has held up permission for other deliveries, despite the declaration of a cessation of hostilities on February 27.

Eldorar said children are suffering from a lack of protein, leading to bloating and excess uric acid.

Amid the siege, Madaya residents have resorted to foraging for grass and leaves, as well as reportedly eating cats.